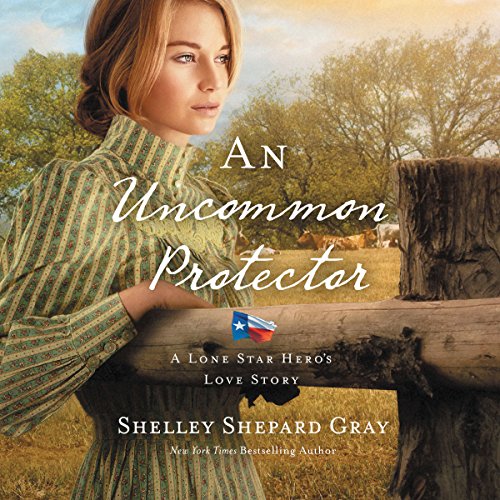 By: Shelley Shepard Gray
Narrated by: Nan Gurley
Try for £0.00

Overwhelmed by the responsibilities of running a ranch on her own, Laurel Tracey decides to hire a convict - a man who's just scary enough to take care of squatters and just desperate enough to agree to a one-year post.

The years following the war have been hard on Laurel Tracey. Both her brother and her father died in battle, and her mother passed away shortly after receiving word of their demise. Laurel has been trying to run her 200-acre ranch as best she can.

When she discovers that squatters have settled in her north pasture and have no intention of leaving, Laurel decides to use the last of her money to free a prisoner from the local jail. If she agrees to offer him room and board for one year, he will have to work for her to pay off his debt.

Former soldier Thomas Baker knows he's in trouble when he finds himself jailed because he couldn't pay a few fines. Laurel's offer might be his only ticket out. Though she's everything he ever dreamed of in a woman - sweet and tender-hearted, yet strong - he's determined to remain detached, work hard on her behalf, and count the days until he's free again.

What listeners say about Uncommon Protector

Enjoyed the storyline, no swearing, which is appreciated. The story could have been a little longer, developing the characters a bit more.

I own the book and enjoy it. It’s the story of a young woman,Laurel, trying to save her ranch with the help of a “convict” she has employed while she is being harassed from both family members and an unknown source.

The narrator does not capture accents or written out clues describing the voices. The book takes place in Texas with Texans and the author mentions the “drawl” and tone of voice, etc. However, the narrator fails to use Texas accents. If she had and if she put mood into the conversations, it would have improved the performance greatly.

The book is a Christian historical fiction with a happy ending. It is the second in the series but, a stand alone read.

This is my new favorite book! It’s the best one in the series! It has an awesome storyline and great character development!

You really can't go wrong with this kind of idea so I liked it a lot :D
So in this book we follow Thomas who is a prisoner because he didn't pay his taxes, then Miss Laurel buys him to work in her land and then the romance between them when there are people who are threatening Laurel to sell her land .. what will happen to them ?
the romance was so sweet and I smiled a lot through out the story and I really needed that .. I'm so excited about the third book because it will feature my favorite character, Captain Devin .. let's see

Laurel is struggling to maintain the ranch which she voted as the legacy for her mother and stepfather. Her stepbrother and stepsister aren't helping with the work but they keep encouraging her to sell.
Laurel is attracted to Thomas when he works on the ranch as a prisoner from the jail. She decides to hire him which will give him freedom and give her needed help.
No sooner than Thomas arrives when bad things begin to happen. A dead calf is left on her porch and then they find a group of dead cattle and are shot at.
Thomas decides to call in help as he is afraid he can't protect Laurel by himself. His friends arrive to help and more danger arises.
I liked the primary and secondary characters. Laurel and Thomas are strong minded but gave insecurities. Will they be brave enough to choose a new future?
Audio Notes: Nan Gurley does a fine job with the narration. She provides distinct voices and appreciate emotions. the narration helped he story to read quickly and smoothly.

An Uncommon Protector is one of those books that make the heart stir and the characters to stay with you way after you quit listening. Even though I thought the difficulty in the book was taken care of somewhat anticlimatically, and I wondered what became of the step-siblings after all the trouble they caused, for me that wasn't enough to take even a star off.

This book is filled with emotion, and there are few narrators that can make you feel every emotion as this narrator. I didn't realize this is the second book in this series about a group of soldiers that were together in a Civil War pow camp on an island in Lake Erie. I'm desperately hoping I will find Nan Gurley narrates that one also!

No, very slow and tiresome. I was looking forward to this book because I love the author's other books. It is too bad that Nan Gurley was the narrator. I think someone else would have made the difference.

Too be honest, I never finished listening to it. I tried several times, but could not handle the long drawn out tedious descriptions.

Who would you have cast as narrator instead of Nan Gurley?

A faster pace and more tension between the two main characters.

narration was amateurish! story was unrealistic.

story was too predictable and narration was hard to listen to. wont be purchasing any more books by this author.

It's ok, just not very exciting. You hear the character's thought analysis of every little move that they could make before they make it- all the rights and the wrongs that go with, and it is too much detail about things that need less detail. In my opinion the story doesn't have enough going on between just the two main characters to only focus on their relationship developing- there needs to be some other events happening, and more characters involved.