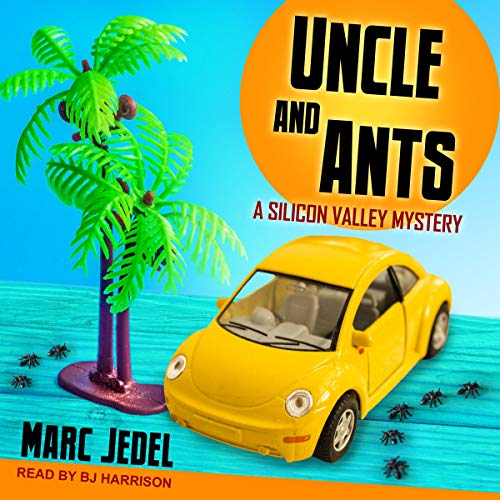 Mysterious attacks. Mischievous nieces. Can a clueless uncle catch a tech-savvy killer...and be home before bedtime?

When a freak accident hospitalizes Marty Golden's sister and condemns him to babysitter duty, he thinks it's just another case of hardwired bad luck in Silicon Valley. Until a suspicious murder suggests the mishap was no mere coincidence. Something must be done.

Convinced his sister is in mortal danger, this amateur sleuth follows clues to an oddball array of suspects. Armed with nothing but an eye for detail and powers of self-delusion, Marty tangles with gangsters, a cantankerous school secretary, and a perplexing woman he can't help but fall for. Glitches in his investigation seem like a piece of cake compared to dinner-prep and bedtime stories with his two precocious, pre-teen nieces.

Can Marty catch the culprit, save his sister, and get his life back in order before he gets unplugged?

What listeners say about Uncle and Ants

O.K. There is a murder, but it is incidental to the subplots. There are a couple of mysteries, some non-gagable romance and likeable, if snarky, characters. Altogether a light, very cute, well-written confection. Oh, with a slight future-oriented backdrop.

One of my favorites ever!

Loveable hero with funny sidekicks. A unquie mystery holds together in an unusual and interesting setting. The story hold lots of twists and surprises with true-to-life relationships. It will have you laughing out loud, at least I did as it had me thinking about my own family relations and my favorite uncle. I do wish I had as super cool an uncle as Uncle Marty, but at least I can have my fun listening about him, his quirky family and his adventures.

This is better than I thought it would be. The story is funny and entertaining, with an interesting and well developed mystery. The characters are engaging and I love the group texts between John and his kids. The dialogue is funny and witty, without being too silly. I haven't finished the book yet, but I'm already looking forward to the next book.

Silicon Valley in a new and family "punny" way

I'm always searching for my next Audible book series. I hardly ever see male leads in a cozy mystery, so this is a new perspective. I enjoyed listening to the fresh storyline, and lots of quirky characters brought to life by an outstanding audio performer. You get a chance to see Silicon Valley in a whole new and family "punny" way. If you read to relax and enjoy an insider view of a new location and culture without actually having to relocate, give this a listen. I've gifted this to several family members and have my pre-order in for Book 2. Thank you, Audible, for making my holiday shopping easy!