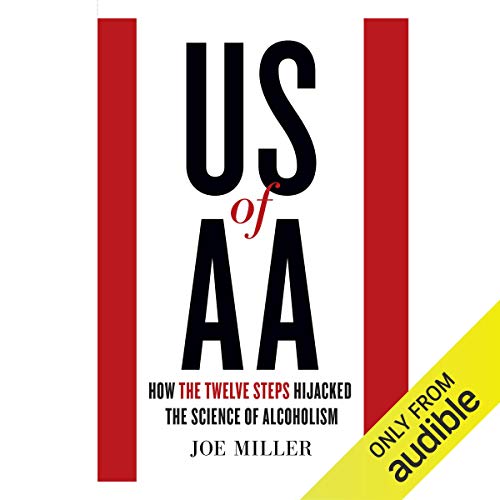 In US of AA, Miller shares the never-before-told story of how in the aftermath of prohibition America's top scientists helped launch a movement that would give rise to a multi-million-dollar treatment industry and a new government agency devoted to alcoholism that has made available millions of dollars for research. Despite the fact that this research showed that alcoholism is a complex disease requiring an array of treatment strategies, among which Alcoholics Anonymous (AA) is one of the least effective, money continued to flow to treatment facilities using approaches similar to AA. Five years in the making, his brilliant, in-depth investigative reporting into the history, politics, and science of alcoholism will show how AA became our nation's de facto treatment policy, even as evidence for more effective remedies accumulated.

US of AA is a character-driven, beautifully written exposé, full of secrecy, irony, liquor industry money, the shrillest of scare tactics and, at its center, a grand deception. In the tradition of Crazy by Pete Earley, and David Goldhill's Catastrophic Care, US of AA shines a much-needed spotlight on the addiction treatment industry. It will forever change the way we think about the entire enterprise.

What listeners say about US of AA

A Detailed History of Alcoholism

Hmmm. While this is an interesting ad well researched history lesson, I am disappointed that there isn’t more time in the book spent on current functional treatments for addiction to drugs and alcohol. Even the “little yellow pill” is to be taken with therapeutic counseling. In the end, oddly, the book left me with the belief, that, as of today, the strongest and biggest organization to provide daily support for alcoholics worldwide is actually Alcoholics Anonymous.

Nice info on AA history and involvement with government and scientific approaches to alcoholism. The author couldn't avoid putting some spin on AA and its members by interpreting motivations and putting personal interpretations on "The Big Book". However, he overall provides valuable information and perspective on the need for quality science-based work and advances in the field of addiction, free from AA bias and influence.

The book I’ve been waiting for ...

I’ve been waiting for this book for over a decade. It’s well-researched & well-written. I’m going to social media to recommend it, now. I will recommend it, often.

I finished on Audible US OF AA: THE HISTORY OF HOW THE TWELVE STEPS HIJACKED SCIENCE by Joe Miller. Definitely recommended and worth one of your credits though the price of 16.99 to read the fine print on Amazon Kindle is a bit steep, informative as it is but not as wide ranging or as interesting as Johann Hari's CHASING THE SCREAM. The subtitle says it all, a history of the disease model for recovery from alcohol abuse and addiction spearheaded by Marty Mann that has taken hold and still with us, a triumph of public relations, politicking, pseudo-science and pseudo spirituality, wrongheaded dogma and willful ignorance over science, research, sanity, genuine empathy. The book does end on a somewhat hopeful note with the NCEA steered more towards research than when Mann was alive and far more open to other avenues of recovery beside AA with Mann's legacy a faded memory. On the other hand the last doctor to be interviewed seems to have all his eggs in the basket of alcohol abuse being a brain disease, something the author, a naltrexone success story, doesn't challenge. I don't have to wonder what Stanton Peele and Carl Hart would say about that and too bad Miller didn't interview them. From the outset Miller sets his book apart from Lance Dodes' THE SOBER TRUTH as being history as opposed to a polemic but I say why can't we have both and I wish we had had both. That said, still a must read or listen for those pro AA or contempt post investigation AA and an eye opener for someone like me new to the particulars and machinations of this backstory. Miller at the end opines that what the secular, non 12 Step recovery movement needs lest it be underfunded into oblivion which is what is happening especially under the current slash and burn administration is its own tireless advocate like Marty Mann.

Miller provides a well-researched analysis of the history of Alcoholics Anonymous and its influence on treatment policy and options in the US. Public health advocates, addiction recovery professionals and policy makers could all benefit from a better understanding of this complex history.

Great book on the cult of AA

After listening to a free Audible story about chile peppers which ended up being a big advertisement for AA, I have a new appreciation for books that expose the truth about this sick cult.

AA not the only way!!

Excellent history of AA and exposes why we need more! Joe Miller, we have our next Ms. Mann, her name is Annie Grace author of This Naked Mind!! I suggest you and anyone interested in learning more about cutting back or quitting drinking look into her and TNM!!