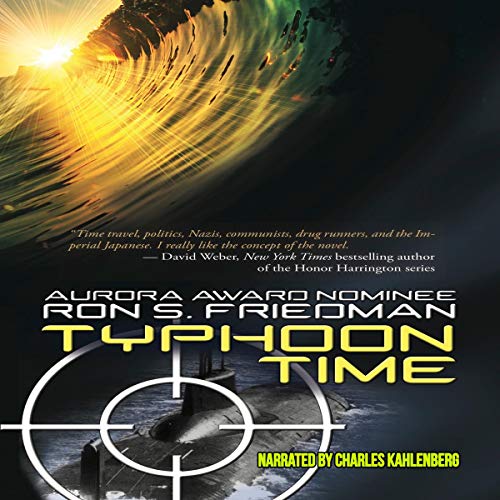 Eric Sobol, a terminally ill Holocaust survivor billionaire, learns of a wormhole that leads back in time to 1938, and he decides to do everything within his power to change the past.

Thanks to their efforts, a modernized Russian Typhoon-class nuclear submarine jumps the time barrier and appears in 1938, manned by 21st-century multinational experts and equipped with the best technology money can buy. But when a saboteur steals a nuclear warhead and delivers it to the German navy, all of history is at stake.

As the crippled Typhoon is ambushed by a U-boat wolf pack, Hitler contemplates how to use his newly acquired weapon to make all of Europe fall to the Third Reich....

What listeners say about Typhoon Time

I have to admit i listened to the entire book. Looking back I honestly don't know why; guess I was just bored. The worst of the experience was the narration by Mr Kahlenberg. He overacted, overemphasised, over-everything-ed from start to finish. Totally distracting.

I downloaded the book because I was interested in the concept. Not so much the time travel part, but the idea of taking a ulitmately superior weapon back in time. I still love the premise......just hated this execution.