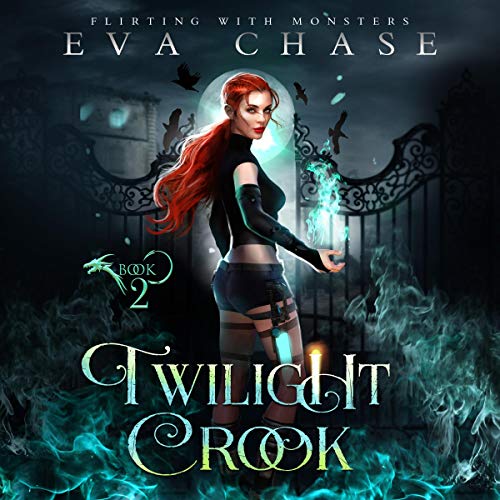 What’s better than three monstrous hotties? How about four....

While helping the trio of sexy-as-sin monsters who followed me home, I lost my apartment, my sense of security, and more blood than was really healthy. Somehow my new lovers make me feel like I’ve gotten the better part of the bargain.

Unfortunately, their newly-rescued boss isn’t so keen on humans. I get the feeling he’d rather rend me limb from limb than give me the time of day. Too bad for him my mortal skills are just too useful to toss aside. After all, we’ve still got a conspiracy of monster-torturing psychos to destroy.

But between crushing Bossypants’s tests and tracking down dirt on our enemies, the most unsettling thing I’ve encountered might be what’s lurking under my skin. I contain powers no human is meant to wield. What does that make me?

I have no idea, but figuring out how to tap into my supernatural side may be my only chance to avenge the woman who raised me and so many who’ve been murdered since. And the one thing I am sure of?

This crook doesn’t back down.

Twilight Crook is the second book in a new urban fantasy series from best-selling author Eva Chase. If you love kickass heroines with sass to spare, drool-worthy monsters who have their own sense of morality, and steamy romances where there'll be no choosing required, dive in now!

What listeners say about Twilight Crook

Another amazing listen from Eva Chase. I love the narrators, they have done such a great job to keep me interested. I could happily listen to them all day . can't wait for more from Eva Chase, this series is amazing.

Another great listen from Eva Chase . i can’t wait for book 3. Vanessa Moyer and Aidan Snow narrate the book perfectly.

Book 2 gives us more action, more mystery and more sexy time!! I enjoyed the adventure and I am looking forward to book 3!

This book was even better than the first. I absolute love Saorsa's character and really enjoyed how the relationship between her and the original three males grew into something more than just physically attraction and repaying a life debt. I'm looking forward to seeing how her relationship with Omen progresses.    This story is full of action as more is discovered about the group responsible for kidnapping and torturing the Shadowkind. Saorsa discovers powers of her own and I can't wait to see how this all plays out in the next book.

Yet another amazing Eva Chase book

I received a free audio copy of this book directly from the author for an honest review. This is yet another great book from Eva Chase, book 2 of flirting with monsters. Loving it!! Introducing Omen who is a very interesting character to the group and the dynamics. I’ve loved seeing how this has played out. I’ve also enjoyed seeing exactly who is the strong fiesty Sorshas friends actually are! The shadow kind is an incredible world which draws you in, the characters make you fall in love with them and the plot makes you stay along for the ride. Definitely a winning combo for an amazing book!

Sorsha's Secret and her monsters

If you like action packed, paranormal, fantasy thrillers with a touch of romance, This audiobook is for you. I requested this audiobook in exchange for a honest review. I loved this reverse harem audiobook about a smart mouth heroine with bigger b***s and smarts than the average man takes a leading role in freeing Shadow kind. In her adventures she begins to question who she really is and how she can offer more to her monsters. In book 2 we catch a glimpse of her bergeoning relationship with Thorrin ,the winged, her deep affection for Snap, the devourer, her changing relationship with Ruse, the Incubus and a possibility with Omen, the hellhound that pushes her to her limit. I chuckled, was outraged, and felt so many emotions along the way and thoroughly enjoyed hearing what would happen next. The narrator Vanessa Moyen did an excellent job with her parts and Aiden Snow's voice is so deep and sexy, he will melt your panties off. Excellent story, plot, and the right amount of humor and romance. 5 Stars

Book 2 in this reverse harem audio. Eva Chase knows how to write a story full of mystery, twists and turns . The details are well written parts. The charade strong , full of purpose, loyalty to each other the action is non stop. The love scean Are scorching hot . This story picks up where book 1 ended Sorcha And her heros find the humans that want to experiment with the shadow kind. The humans want to experiment with the unknown Shadowkind. Why are the humans wanting to find out . The experiments are somewhere else in hiding . Vanessa Moyen, Aiden Snow Performance was perfect. They did all the characters great. With Aiden voice you were able to know who each character was

The narration was great. This is the second book in the series, and the suspense kept me listening. There were a few steamy scenes but it didn't run the book. The MC was badass and didn't take crap from anyone. Her men, while still trying to figure out their feelings, stuck by her side. Definitely worth the read! Onto the next!

Even better then the first book I really enjoyed this book very interesting story fun and entertaining, full of action and steamy i can't wait to hear the rest of the series

I adore the story! The narrartors are some of my favorite! Eva chase does it again with a great story and great character building. when you aren't sure of what you are and you are a little afraid of what that might mean what do you do? well find out what the main character does by reading/ listening to this book.

I love this series. It is amazing. I love the characters and storyline. Narration was amazing as well!!

Even better than book 1!

I enjoyed book 2 of Eva's Flirting with Monsters even more than book 1! I loved how the relationships developed for Sorsha and her other monsters. So many swoonworthy moments, I can't pick my favorite!! I couldn't stop giggling and smiling with a lot of this book. But the action and kickbutt moments were phenomenal as well. We get another twist I didn't see coming, another monster who I think will eventually become part of Sorsha's harem who is totally an arrogant, stubborn d-bag. We see some vulnerable moments from all the main characters, and I cannot wait to see how much more they open up in Book 3! I felt so bad for one of the characters, I just wanted to hug him and tell him it was going to be ok. I hope things get resolved early on in book 3, I need the group to be back in sync (at least for a little bit haha). I think Sorsha definitely rose up my rankings of favorite MCs. I love her snark and her quirks, but we got to see her really come into her own in this book. I also really enjoyed the side characters in this book. Omen's acquaintances (I loved how Sorsha's dragon really liked one of the big, lumbering guys haha, made me laugh every time). I loved the equines as well and glad things worked out for them in the end. Great job again with this series, I am dying for book 3 on audio ❤️❤️❤️ For the narration, Vanessa and Aiden are top notch as always. I really enjoyed the vulnerable scenes that Aiden really made my heart ache and want these characters to be real so I could console them haha. I also loved Vanessa's take on the male voices, did a great job with the details, made it super easy to figure out who was who. I think my only small/minor complaint was I had a tough time figuring out if the new character was Omen or Owen haha (since I haven't read the books). I think it was hard to tell sometimes. Also Rue vs. Ruse haha. But like I said, super minor, would 1000% still give them both 5 stars!

I was given this free review copy audiobook at my request and have voluntarily left this review. I need the next book right now! This book had lots of action and steam! Sorsha just keeps being a bad a$$ and I love her! Im hoping to get to know more about boss man Omen as I continue this series!

Great continuation of the series. The characters continue to be delightful and the storyline stays fresh and interesting.

I love an author that knows how to keep my attention. Generally by the second book I'm bored with it, but I will be buying the third book as SOON as it comes out on Audible.

Lots of action in the second book of the series. Grab book one first so you know what's going on. Sorcha is sticking with her shadowkind lovers, even if she has to put up with their newly-liberated boss's attitude. Omen is not at all convinced that she can be trusted to stick with the so-called "monsters" that many humans shun. Not that all humans even know of their existence. He also doesn't believe that her puny human body equips her to fight with them. He seems to love devising little "tests" to try to make her admit that she can't hang. Yeah, not gonna happen. It appears that Sorcha may have talents even she is unaware of. As things start to heat up in the conflict of human vs shadowkind, Sorcha does a little heating up of her own. When her human allies start to turn against her, she becomes even more determined to prove her worth. Then one of "her" shadowkind disappears, now she is really mad... I was given an advanced copy of this book by the author. My review is voluntary.

I think I loved this audiobook better than the last! The characters are really coming together and becoming an amazing team. The narrators continue to be fabulous. If anyone is looking for a listen that just keeps getting better this is the book for you! 💙