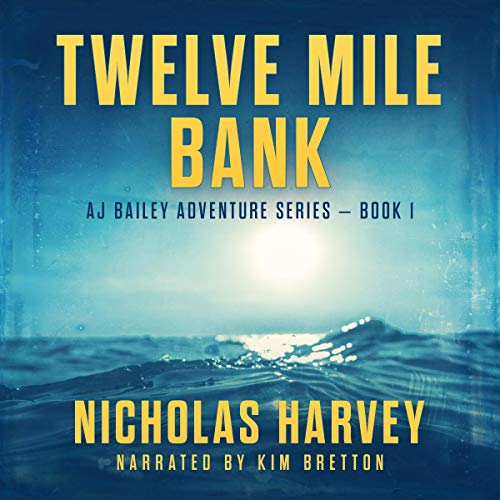 By: Nicholas Harvey
Narrated by: Kim Bretton
Try for £0.00

AJ Bailey was destined to run a dive boat on the beautiful island of Grand Cayman, the Mecca of Caribbean SCUBA diving.

As a young girl in England she was captivated by a story her Navy veteran grandfather told. Now, as she's closer than ever to discovering the long-lost submarine from the story, a wealthy Argentinian arrives; a treasure hunter who’ll stop at nothing to steal the prize.

Can AJ find the wreck in time?

Or will the Argentinian hunter and his ruthless crew beat her to it?

It's a race against time at treacherous depths to uncover the real secret of the lost submarine.

My daughter told me I might enjoy this book so I had a listen. I LOVED it. I recommend it and Ill be listening to the whole series.

Twelve Mile Bank is the first book in the AJ Bailey adventure series.
And it has it all.
Gripping suspense, memorable characters, action, adventure, fascinating back stories and all set in an idyllic paradise.
The narration was spot on. Kim Bretton skillfully breathes life into a vast array of characters from a young girl, to an Argentinian mobster to an aging grandfather and everything in between. I loved the back story chapters with the Grandfather - both the writing and the narration were stunning and genuinely touching.
Great series start!
I'm really looking forward to following this series. Highly recommended.

Twelve Mile Bank was a fun adventure story. AJ is an easy to like character and it was a joy to follow her around on this action-packed tale. Her friend and diving mentor, Reg, enjoy their job of taking tourists out diving among the coral reefs. AJ is really good at her job and several tourists return yearly just to dive with her. I liked that the story showed her working with a variety of clients, from kids to the retired.

There’s flashes of past events sprinkled throughout the story. These reveal a German submarine and how she came to rest among the reefs of the Cayman islands. I felt these bits were really well written and I kinda wanted a whole companion story focusing on these (mostly) young lads who are caught up in a war they didn’t want.

AJ and Reg come across a wreck and they are very anxious to get it registered. There are some unsavory characters around known for swooping in and stealing wrecks from other treasure hunters. Now AJ battles the clock to get the wreck registered properly. This added a delicious tension to the story.

The story ramps up the suspense as AJ heads off on her own. Yet there is betrayal, Mother Nature, curious sharks, and more for her to contend with. It was all very exciting! But then the story oddly ends in a non-climax. Yes, we get resolution on everything but there was no real confrontation with the unscrupulous characters nor the exhilaration of bringing the wreck (or it’s contents) to the light of day. 4/5 stars.

The Narration: Kim Bretton was a great pick for this story. I loved her various accents for the characters, keeping them all unique. Her male characters sound like men and her little kid voices are spot on. Bretton did a great job of capturing AJ’s feelings and her performance really added to the action and suspense. There were no tech issues with this recording. 5/5 stars.

I received this audiobook as part of my participation in a blog tour with Audiobookworm Promotions. The tour is being sponsored by Nicholas Harvey. The gifting of this audiobook did not affect my opinion of it.

fun and makes you want to visit

the story line was great and good historical facts and story.
the narrator we very enjoyable and will search her out

I really liked this book and the story. The narration is really good too. The story is well written and moves at a good pace. It has interesting history aspect too. I also like all the scuba activity in the book. I'll be following his AJ series.

This is an adventurous, action packed aquatic novel!

As a somewhat rebellious youth, AJ was always a little mischievous and never really knew what truly interested her. It certainly wasn’t anything indoor or reserved. Then, one day her family was invited to go diving. From then on, she knew what her life’s occupation would be!

AJ and her paternal grandpa were very close. She loved to hear his wartime stories over and over. She especially liked the one when they discovered three men in a raft. They were Germans and only one was barely alive. They tried to save him. He told her grandfather about a sunken submarine with valuables on it .

Years later, now an adult with her own business on the Cayman Island, she endlessly searches for the missing submarine. As always, adversity strikes.

The story is very interesting. It’s apparent the author put a lot of thought and research into his story. The story seems authentic, the characters are very realistic and the circumstances are portrayed realistically. It has an unexpected ending. The Title and Book Cover are simple but fitting. However, the story ending was weak. I fails to entice the reader to be anxious for the next book of the series.

Narrator, Kim Bretton, started out sounding very annoying and boring, with many phrases murmured and not understandable. As the story progressed with more conversation and less background information, she greatly improved.

*This audio book was gifted to me with no pressure for a positive review. This is my honest review.