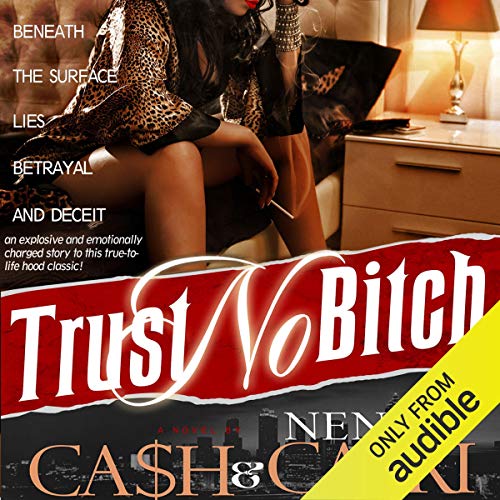 They say loyalty is everything, but beneath the surface of a promise lies betrayal and deceit. Taught by the best and given the keys to an empire, Kiam's loyalty is tested at every turn, as he strives to enforce his rule over those who ultimately can't be trusted. A deadly warning directs his course as he strives to carry out his orders. Complications set in when his mentor's beautiful, sexy, and rebellious daughter Lissha - who is as comfortable carrying a gun as she is carrying a Gucci bag - forces Kiam to decide between his sizzling desire for her and his immense loyalty to big Zo. Amidst the torrid-but-unspoken passion that builds between Kiam and Lissha like a blazing inferno, lie hidden alliances and deceit that threatens to explode at every turn. With sex, money, murder, and dark secrets lurking around every corner, and a team of beautiful yet dangerous women he is forced to work with, who will ultimately be the bitch he can't trust?

What listeners say about Trust No Bitch

This is my first book by this author and the narrator. Loved the story and the performance. I've already purchased the other two books in the series and will start book 2 today. Must listen!!!!

couldn't finish because of how the narrator read it. makes it so uninteresting. boring narration.

I would have preferred a woman narrating the lady parts, but overall, it was a damn good read! Raunchy, hood and gangsta! I loved it!

I Am So Ready To Hear Book 2! Great Book! I Love Me Some Ne Ne Capri.. The Narrator Did Alright, But It Could Have Been Better! This Man Sounded Like A Damn News Reporter! It's More Of A Savage Type Of Read, So I Was Waiting On Different Types Of Personality.. Alot Of Time's He Was Too Dry, Or Kinda Like He Was Reading A Fairytale To A Bunch Of Babies!! Smh.. I Think Cary Hite, Nicole Small Or Mr. Gates Could Have Did It Better! Overall, I Loved It Tho! It Was Well Worth The Coins.. ❤

Would you consider the audio edition of Trust No Bitch to be better than the print version?

No because the narrator stumbled over the words too much. I only finished because I liked the story.

None of them really. They were backstabbing each left and right. They all made decisions I didn't agree with.

The process of Kiam taking over the streets.

If you could take any character from Trust No Bitch out to dinner, who would it be and why?

I wish the author had selected better names for the main characters. I kept getting confused. There were some that I could keep in straight. But come one. He could have done better with the names . Other then that The book was good.

please tell me
How do I get my money back? not a good read bc of narrator!!!

The man reading this story makes this audio book laughable. He has no idea how to phrase the sentences and make it sound like dialogue. I guess I got spoiled after listening to Cary Hite That I though all narrators were that good. The sex scenes made me laugh out loud . He reads them in a loud crazy voice that I just can't enjoy. I can visualize him standing in a booth or bathroom reading from a script. I don't visualize the characters. I'm only on Chapter 7 but I'm returning this one to Audible. I'm not sticking around to see if the story is any good.

Kiam is a beast. A bad boy you want to hate but can’t. He has nothing but pretty deadly women and envy around him. His gangster is deadly

I did recommend to my friends, we listen at work lol.

Kiam because I love how he demands his respect and how he handles business.

He's just ok, not very good in changing his voice for each character.

Who was the most memorable character of Trust No Bitch and why?

All of them really because they all were very interesting.

It took me a minute to get into the book but once I did I couldn't stop listening. I am looking forward to part 2 and 3.