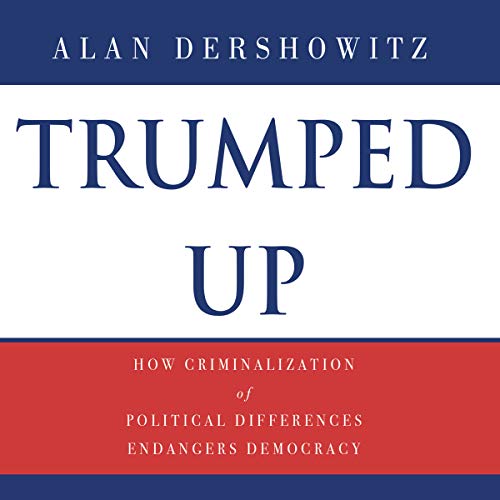 By: Alan M. Dershowitz
Narrated by: John Pruden
Try for £0.00

In our current age of hyper-partisan politics, nearly everyone takes sides. This is especially true with regard to the Trump presidency, which did not cause this profound division but has drawn it to the surface, making it the dominant paradigm of political debate. Both sides scream lock 'em up, criminalizing political difference instead of making substantive criticisms of opposing views. This deeply undemocratic fallacy - that political sins must be investigated and prosecuted as criminal - is an exceedingly dangerous trend.

The underlying problem, Alan Dershowitz argues, is that we have weakened our national commitment to civil liberties. The vibrant center is weakening, with traditional liberalism and conservatism becoming further apart - not just in approach but also in their respect for Constitutional norms. And unless we as a nation begin to focus again on what unites us rather than on what divides us, America might not survive the next decade.

What listeners say about Trumped Up

The book describes how we can disagree without disrespecting the other side. The arguments are made on sound principles without name calling.
I wish our politicians acted in a similar manner.
We should require all politicians to read the book.

I usually find work by Professor Dershowitz to be informative, concise, logical, fair-minded, well-written, and based on solid legal reasoning. This book follows his general pattern...with some notable exceptions. It seems to be a collection of previously-published (or previously-posted) articles/essays. As such, it contains many of the same facts and rationales, repeated over and over and over with each subsequent article. I do not regret listening to this book - I gained valuable understanding of and insight into politically-motivated criminal investigations and their lack of related constitutional underpinnings - but I feel these points could have been expressed in many fewer hours. Included, as well, was much discussion of the 2016 presidential election candidates and their platforms, with little content linking these discussions to the book’s main thesis. I’ve often admired Professor Dershowitz’s objectivity, ability to express his personal views separately from his arguments, and his courage in making sometimes unpopular and/or politically-isolating points. However, in this book, his party and policy preferences were on full display, especially in the early chapters dealing with the election. Further, he regularly addresses anti-Semitism, particularly among political figures, a subject worthy of attention and condemnation but unrelated to the topic at hand (he deals with anti-Semitism beautifully in “The Case for Israel”). John Pruden provides excellent narration here; it’s a great “listen” in that regard. Thank You!

This book was so boring. In fact, it barely qualifies as a book. It’s just a compilation or newspaper articles and interviews. Lots of redundancy and repeat statements/ideas. I expected better...

I applaud Alan Dershowitz for his interpretation and support of the law. However, the book is highly highly repetitive using the same citations over and over again making it tedious to listen to.

I have read or listened to many of Mr. Dershowitz’s books and have liked all of them and usually provide a five star rating. I found this book to be very good and I agree on most points, but I think it could have more directly made the point with fewer pages.

Throughout the book Mr. Dershowitz repeated many topics and conclusions with similar use of examples. When I taught and a student asked how long the paper had to be I would say as long as it takes to provide a cogent argument on each subject. I didn’t want too much BS nor did I want incomplete thoughts.

I think Mr Dershowitz or an editor should cut out the repetitive content. Otherwise the book was thought provoking and entertaining. Thank you.