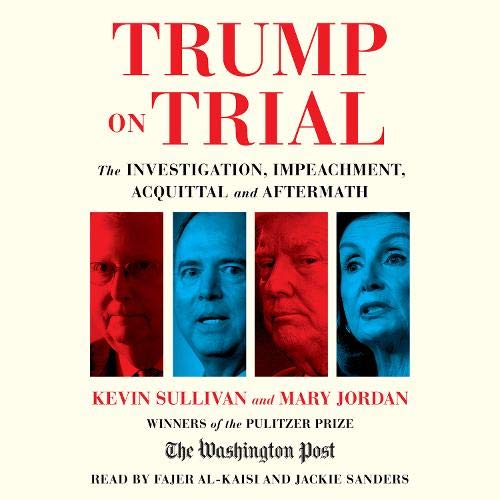 “Page-turning…riveting…colorful and detailed…a barometer of the health of our democracy.” (Barbara McQuade, The Washington Post)

A year apart, two ferocious political dramas challenged American democracy. As Pulitzer Prize - winning Washington Post reporters Kevin Sullivan and Mary Jordan show in this gripping account, the two Trump impeachments and acquittals shared common threads: An American president, relentless in his drive to win re-election, willing to disregard the laws that limit his powers, no matter the cost. A divided Congress, split along party lines, unable to agree on whether Trump’s actions met the Constitutional standard for removal from office. The Constitution itself, tested in ways that its framers had not anticipated.

Trump’s Trials is an expanded version of Trump on Trial, Sullivan and Jordan’s compelling and masterful 2020 account of the first impeachment. That narrative, a crisp page-turner with exquisite detail and vivid scenes, deftly conveyed the calculations of the central ﬁgures, in particular Speaker of the House Nancy Pelosi and Republican Senate leader Mitch McConnell. The authors have added three new chapters, and revised others, to carry the narrative through the 2020 presidential election of Joe Biden; Trump’s feverish attempts to overturn Biden’s victory; his supporters’ deadly attack on the Capitol as Congress was certifying the electoral votes; Trump’s second impeachment and acquittal - but this time, with seven Republican senators voting against him.

Sullivan and Jordan, aided by editor Steve Luxenberg, have written a fast-paced, authoritative account of the historic events that rocked America - an invaluable examination of what happened and why.

What listeners say about Trump on Trial

Tremendous detail of our time

This book is deliciously detailed and researched. It is definitely the All the Presidents Men of our time.

Frustration and incompetence on trial that ended with no answers and ample looses. it's was a window into government as we hope it wouldn't be