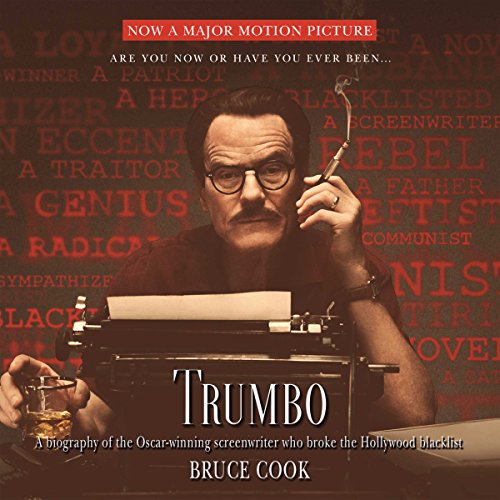 A Biography of the Oscar-Winning Screenwriter Who Broke the Hollywood Blacklist
By: Bruce Cook
Narrated by: Luke Daniels
Length: 14 hrs and 18 mins
Categories: Biographies & Memoirs, Artists, Writers & Musicians
4 out of 5 stars 3.9 (7 ratings)

A central figure in the Hollywood Ten and one of the most successful screenwriters in Hollywood history, two of Trumbo's screenplays earned Oscars (Roman Holiday and The Brave Ones) while he was blacklisted and unable to receive public credit for his work. Trumbo was also the author of Johnny Got His Gun, winner of the National Book Award and one of the most powerful antiwar novels ever published. He epitomized the spirit of American capitalism, yet he went to jail refusing to talk about his membership in the Communist party.

As a result of his relentless fight for political freedom and the right to work for those blacklisted by the House Un-American Activities Committee beginning in 1947, he ended the blacklist era in 1960 by earning proper screen credit for his work on the blockbuster films Exodus and Spartacus. An extraordinarily complex character, he was, as author Bruce Cook states, "an exemplar of a certain set of American virtues: toughness, independence and persistence". Dalton Trumbo was the central figure in the Hollywood Ten, the blacklisted and jailed screenwriters. One of several hundred writers, directors, producers and actors who were deprived of the opportunity to work in the motion picture industry from 1947 to 1960, he was the first to see his name on the screen again. When that happened, it was Exodus, one of the year's biggest movies.

I had high hopes for this but have decided I'll stop at the end of part 1 and not bother (for now) downloading the second part.

As others have said, the voice the narrator has chosen for Trumbo may well be accurate, but it's no great pleasure to listen to.

More of a problem though is how the book is written. It's quite an old biography (late 70s?) and maybe this was more the style back then, but Bruce Cook puts himself very much centre stage in this. It reads almost like a collection of magazine interviews and there is so much padding around these encounters it becomes very frustrating - Bruce describes the person he's interviewing, he asks a question, the person thinks about their answer, gives their answer (usually saying what an amazing person DT was), Bruce confirms that's in line with what he's heard from other people, etc etc

The result is the actual thread of the narrative - which I'm sure is fascinating - gets lost behind this flood of unwanted detail. Let's hope somebody else does a better biography of Dalton Trumbo, I'm sure he deserves one.

interesting biography of the screenplay writer who broke the hollywood blacklist of the 1950s. well worth a listen.

It's hard to believe this book was the basis for the movie Trumbo. The movie is very good and covers the exciting part of his life.
This book starts with Trumbo 's youth and plods along.
But even when it gets to the blacklist it is dull.
Worse the narrator has chosen a very grating accent for Trumbo as well as many other characters. And the narrator's normal voice is just as bad.
If you want to hear a better book, get Kurt Douglases book "I am Spartacus. "
It covers how Douglas broke the blacklist by hiring Trumbo. And is narrated by Michael Douglas.

Would've been able to listen to it all but..

Where does Trumbo rank among all the audiobooks you’ve listened to so far?

The actual story was great. It was wonderfully written, and an awesome read.

Who would you have cast as narrator instead of Luke Daniels?

I found the book interesting but not nearly as engaging as I had hoped. It's a bit dry in spots, the reader is good and does a good job distinguishing the characters. The most interesting parts are at the midway point once we get into the red scare part, but even then something is missing. Overall still happy listening, not sure if there's rereading value. IMHO

Would you listen to Trumbo again? Why?

I really enjoyed Trumbo and the history of the black listed writers, actors, directors, etc in a time of history that made Trumbo and broke other artists. I heard about the recent movie and wanted to know more about the Dalton Trumbo. The historical context and political influences that wreaked havoc with people's lives and creativity was told in compelling and honest narrative. Great read.

Dalton Trumbo's resolve to support his family and his willingness to do all kinds of work to write and support his family was impressive. The extent to which the governrment hearings that resulted in the blacklisting of many people is tragic

What does Luke Daniels bring to the story that you wouldn’t experience if you just read the book?

Luke Daniel's reading of the book was stellar. He was able to consistently create characters that I felt and felt for throughout the story.

Creativity (writing genius) lives even in the darkest of times.

If You Enjoyed the Movie You Will Enjoy the Book

His acceptance speech which if I remember correctly was given to the Writer's Guild of America, West when they gave him credit for his work on the movie “Roman Holiday”.

The book covers Trumbo's life from childhood until his death which helps one to better understand the man. The movie which I thoroughly enjoyed covers his life primarily during the period of the Hollywood Blacklist.

a work of film history

I learned so much about The Blacklist and the people are some of the people that it affected the most.
Very interesting book very well written.