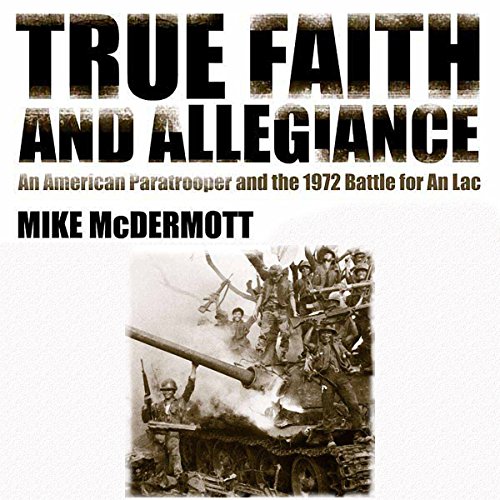 True Faith and Allegiance: An American Paratrooper and the 1972 Battle for An Loc

By: Mike McDermott
Narrated by: Brian Smith
Try for £0.00

True Faith and Allegiance: An American Paratrooper and the 1972 Battle for An Loc is an intimate and compelling account of the most brutal infantry warfare. It is also a critique of the mishandling of America's departure from Indochina. An unintended consequence of Washington's stampede to get out of Indochina was an upsurge in combat on a scale not seen before in Vietnam, peaking with the Easter Offensive of 1972.

The battle for An Loc, a key component in the North Vietnamese attempt to overwhelm the South, swept Mike McDermott, then the senior advisor to an elite South Vietnamese paratrooper battalion, into some of the most horrific close-quarters fighting of the war. His in-the-trenches account is augmented by detailed descriptions of a user's perspective on the parachute resupply, tactical airpower, and B-52 strikes that allowed the An Loc garrison to survive.

True Faith and Allegiance is a riveting recounting of the prism through which a Vietnam veteran views the war as he continues to live with the aftereffects of life-altering experiences in the service of his country.

The book is published by The University of Alabama Press.

"I cannot recommend this book strongly enough." (James H. Willbanks, author of The Battle of An Loc, Abandoning Vietnam)
"McDermott thinks and writes clearly, and deals with significant issues. He describes the nature of the fighting at An Loc with great clarity." (Edwin E. Moïse, author of The A to Z of the Vietnam War and Modern China: A History)

What listeners say about True Faith and Allegiance: An American Paratrooper and the 1972 Battle for An Loc

After reading The Battle of An Loc by James Willibanks, this author gives more details of one part of the battle from his experience in that battle.

Vietnamise Battle of An Loc.

It was an interesting book and history but not as good as I had expected it to be. I would still recommend it if interested in Viet Nam War.