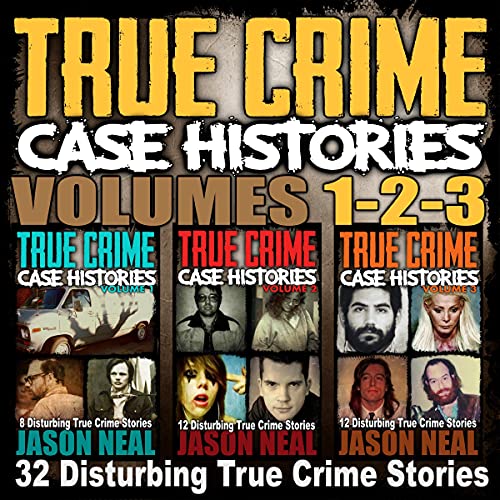 I start all of my true crime books with a quick word of warning. Most news articles and television true crime shows skim over the vile details of truly horrible crimes. In my books, I don’t gloss over the facts, regardless of how disgusting they may be. I try to give my listeners a clear and accurate description on just how demented the killers really were. I do my best not to leave anything out. The stories included in these books are not for the squeamish.

What you are about to hear are my first three books. The stories in this collection will make you realize just how fragile the human mind can be.

A sampling of the stories include:

The Canal Killer - A violent psychopath cuts off the head, hands, and feet of his girlfriends and dumps them in the canals of London and Rotterdam.

The Head in the Bucket - A drug kingpin chops off the head of one of his dealers and carries it around in a Home Depot bucket.

The Coffee Killer - A young woman, jealous of her rich socialite friend, poisons her by lacing her coffee with cyanide in a public coffee shop.

The Arizona Torso Killer - A petite trophy wife shoots her husband, freezes his body, hacks him up with a jigsaw, and dumps his torso in a dumpster behind a grocery store.

The Oxford Murder - A young college student strangles his girlfriend and crams her body into an eight-inch crawlspace beneath the stairs.

The Girl in the Barrel - A homeowner finds a 55-gallon barrel in the crawl space beneath his home. What they find inside the barrel unlocks a murder mystery dating back 30 years.

The Dexter Wannabe - A young man obsessed with the TV show Dexter lures unsuspecting victims to his "kill room" and keeps a detailed diary of the dismemberment of his prey.

The Murder of Elizabeth Olten - A 15-year-old girl wants to know what it feels like to kill a person.

The Girl in the Box - An unbelievable story of a psychopath who kidnaps a young girl and keeps her as a slave locked beneath his bed for seven years.

The Green Chain Rapist - A beautiful young mother is butchered in broad daylight in a London park and the only witness is her two-year-old son. Police then waste three years chasing the wrong man while the real killer slaughters another woman.

Paige’s Secret Life - A young single-mother of three goes missing and police realize she's been living a secret life that her friends and family didn't know about.

A Walking Shadow - A suicidal teenager, frustrated with the bank threatening to foreclose on the family home, kidnaps the bank manager's 10-year-old son and holds him for ransom.

Superficial, badly done and monotonous despite the horrible subject matter

Being given the full details which the author claims are usually kept from the public, is this series’ claim to being different from other accounts. The people who normally hear these details (jury) are given counselling! However, it’s actually all just a monotonous litany of curiously boring facts devoid of any psychological depth. The narrator’s hick American accent does nothing to help matters. This leads one to wonder why anyone would want to listen since it treats the horrors in such a pedestrian way. I’ve heard countless true crime accounts which are able to give a psychological perspective which helps in understanding why these terrible things happen. This is a voyeuristic set of accounts posing as being informational. Telling the listener that the toolbox killers’ victims’ screams are like nothing you’ve ever heard is just tawdry and lacking in empathy or balance for the victim’s side of the story.

For those people just getting into true crime, this book offers several fascinating cases....

For us seasoned vets of the genre, this book offers very little to keep us interested. Many of these cases have already been featured in various true crime series and documentaries. There are at least four or five cases that I remember being showcased on Forensic Files, and the similarities between the two media are.....unsettling, but I won't go any further than that.

If you're new to the genre, get it. If you're a diehard true crime fan, skip it. You MIGHT learn about one or two new cases, past that theres no replay value.

By the way, I gave the narrator an extra star for effort. He made the stories listenable, despite many of them having been narrated before by the great Peter Thomas on Forensic Files.

Why am I bored?

Maybe I have too much knowledge of the subject matter. I knew most of these cases. I was hoping for fresh material but it’s non fiction so these crimes get retold and retold. Very boring

Unbelievable, and not in a good way.

If these stories are true, they are written like fiction. And Undoubtedly have been altered by the writer (in what I'm assuming was an attempt to make them more interesting). I've never met a four year old who can tie their shoes, much less engage in auto erotic asphyxiation. That was the moment that I knew that all of these stories have either been partially or completely fabricated. The way it's told almost makes you root for the killers too. Jason Neal needs to find a real job and stop trying to beat nickels out of long dead horses. If these stories are based on real people, he's done them zero justice in making them out to look like assholes. And if he thinks that any of these stories are believable, then he should also check to see if they are interesting because there was not one account referenced herein that was both.

If you are into true crime, these collections are great for the ride to and from work

love it.. kept me listening thats for sure! thank you very much ! !