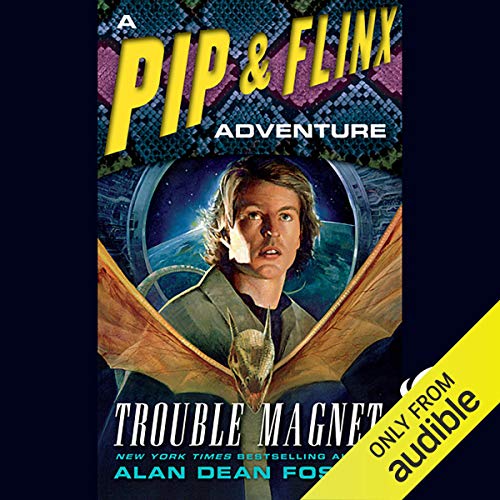 In this dazzling new novel, Flinx confirms his status as the galaxy's greatest magnet for big trouble. Wandering out there in some remote region of the galaxy is a gargantuan sentient Tar-Aiym weapons' system. All Flinx has to do - while his pals look after his injured love Clarity Heldï¿¿ï¿¿is find the hefty object and persuade it to knock out the monstrous evil that is hurtling through space to waste the entire Commonwealth. A no-brainer, really, especially for Flinx, who is never without his loyal entourage of official snoops, crazed zealots, assorted goons, and the occasional assassin. Indeed, the boy wonder and his mini-drag, Pip, are eager to commence their heroic task...just as soon as Flinx visits Visaria - a dangerously depraved planet - to convince himself that humans are indeed worth saving.The chances of stumbling across high moral values and utopian ideals don't look promising - what with Flinx playing a lawless Pied Piper to a gang of lying, thieving juvenile delinquents. But prospects really go south when Flinx runs afoul of the corrupt planet's ruthless crime king.

Still, life is full of surprises, and Flinx is about to get smacked by a passel of them - by turns devastating, heartening, and positively jaw-dropping. For although Flinx came to Visaria to plumb the enigma of humankind, there's another mystery waiting here, a shocking clue about his own shadowy past.

What listeners say about Trouble Magnet

A great read and continuation of a series. Love how both this and running from a deity fit bloodhype in the middle neatly.

... and in the end and thankfully, an apparent return to the main plot. Certainly one of the better books of the Flinx and Pip series.

Love is always the answer!

Loved the book as I have loved the entire series. Why hasn't this series been made a film or TV Program such as ROOTs?

Flinx reflection on his youth, and makes friends

I love Alan Dean Foster's writing style. Its hard to go wrong with his stories.

Flinx is in less than half the book.

What would have made Trouble Magnet better?

This is the second book in a row that Flinx plays a minor roll in. This appears to be the author's attempt a a gritty, urban teen novel. Closer in tone to The Outsiders than previous Flinx books, and other than a short scene at the end of the story does nothing to progress Flinx's overall story. Save your money and skip this one.

Have you listened to any of Stefan Rudnicki’s other performances before? How does this one compare?

I really like Stefan, he does a really good job with some poor material here.

What character would you cut from Trouble Magnet?

I'd cut more than half the book if I could

These stories start off well then Descend
Into the authors phobic concept of a future
Where Flinx must forever run for his life out of fear someone might find out his dna was modified before birth resulting in his now legal execution for being "abnormal"
Dumb.