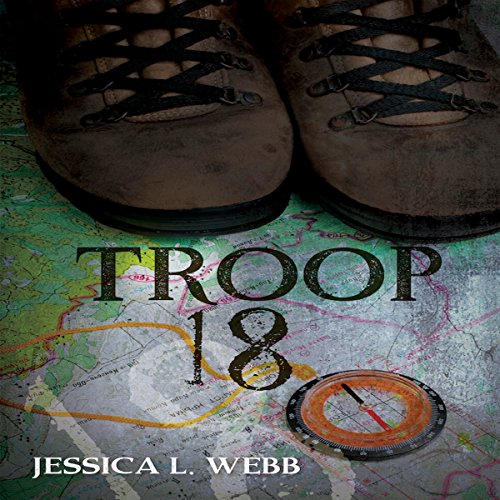 By: Jessica Webb
Narrated by: Ruby Rivers
Try for £0.00

Andy can't seem to stop worrying about Kate. Instead of obsessing over things she can't control, Andy takes on a unique case involving a troubled troop of cadets from the RCMP training academy. The troop is tightly bonded, especially since the recent death of a fellow cadet. They are also hiding a secret, and Andy has been tasked with uncovering it.

When Kate unexpectedly shows up as part of the team supporting the troop, Andy has to find a way to balance her job and her heart. As the conspiracy is exposed, a medical emergency brings Kate and Andy closer together even as the troop begins to fall apart.

What listeners say about Troop 18

Great book. Would most definitely recommend to any person who enjoys thriller / crime fiction.

This book kept me entertained and intrigued. Was looking for just a romance and got a whole lot more.

I do admit I was a little glazed over following the story. It was a nice sequel to book one but could've been better.

I have to be honest, when I went into this book and saw that the perspective had shifted from Dr. Kate Morrison to Sergeant Andy Wyles, I was a bit worried. I love Dr. Kate Morrison. I love her point of view, I love her lack of self-preservation, and I loved watching her navigate her way through the daunting realization of a first love with a woman.

I shouldn't have worried.

In my love for Dr. Kate Morrison, I'd not considered how much I adored Andy—the no-nonsense way she handles her life, the way she lives by a strict code, and the way Kate completely got to her and made her re-examine so many of her "rules." So, stepping into Andy's point of view was a blessing, especially given how we left the pair in the previous book, Pathogen.

Much like Trigger, the first book in the series, the main narrative is the mystery to this thriller, and in this case it strikes close to home for Andy, who is tasked with uncovering what's going on with a troop of RCMP cadets who are in danger of washing out if they don't come clean about what it is that's going on amongst them.

Andy sets up a remote setting: a camp of small cabins she borrows from a retired friend, and alongside some of the troop's instructors, she tries to uncover the mystery. When the medic of the bunch is replaced after a couple of days with Dr. Kate Morrison, her love life and the mystery she's facing threaten to split her attention.

Webb delivers what I now know is her typical snarl of characters with complex motivations, and the mystery is a tough nut to crack. The clues are there in retrospect (and I felt rather clever for catching one of them, though I had no idea what it meant at the time). The journey is satisfying, and for those who have wondered about Dr. Kate and Sergeant Andy from the get-go, the resolution of their relationship status is within this book.

I should mention I listened to this one on audiobook, and it was performed, like the other two, by Ruby Rivers. Unfortunately, this book, like the second, contained a lot of Canadian references, and Ruby Rivers sort of mangles the language. For example, Regina, the capital of Saskatchewan, is pronounced as "Ruh-gene-uh." French Canadian names get the same cringeworthy treatment. It's unfortunate, but I imagine non-Canucks won't find it quite so troublesome.

Once again Kate and Andy do not disappoint I love them working together being together and enjoying their life together. Hope there is a book 4 in the works.