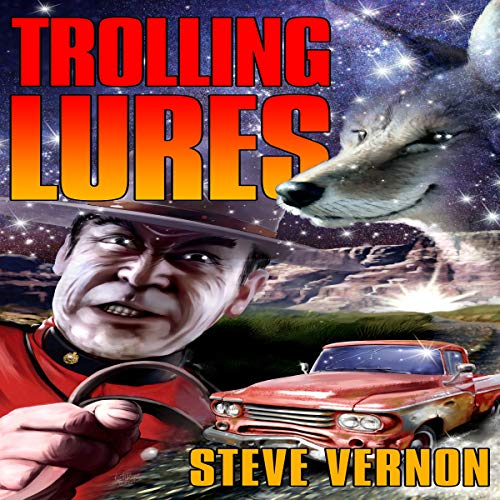 It started out as a simple drive down a country road. Oh sure, Hillman was thinking about suicide. Oh sure, the dead woman is in his back seat was goading him on. What was the point? Why bother living? Who am I?

It turns out Coyote has something to say about that. Coyote...and a troll.

"Trolling Lures is a campfire tale on speed, a heady cocktail of remorse, discovery and the quest for redemption, couched in equal parts bedtime story and fever dream. It is surrealism personified, and if you're into that sort of thing, Vernon has a treat for you." (Dark Scribe Magazine)

"If Harlan Ellison, Richard Matheson and Robert Bloch had a three-way sex romp in a hot tub, and then a team of scientists came in and filtered out the water and mixed the leftover DNA into a test tube, the resulting genetic experiment would most likely grow up into Steve Vernon." (Bookgasm)

What listeners say about Trolling Lures

Much like others of Vernon's work the writing is pretty full on with dead people, bodily functions and graphic detail. It's all a bit surreal in many ways but if you stick with it then it's an ok short-ish tale.

The narrator read well and did some good voices and some less so good, but generally I couldn't complain at all as it was easy to listen to.

Well one thing I can say is "that was different". When I started the book I had no idea what it would be about. now that it's over I question whether I truly know what it was about. but I did enjoy the book. The only negative I have to say about the book, well not really negative more like so so. I really didn't care for the narrator. not saying he was bad it just not my style. but other than that I give this book a 4/5

This was my first time listening to a book by Steve Vernon. Probably going to add a few more of his books to my reading list.

I was voluntarily provided this free review copy audiobook by the author, narrator or publisher

This is a very imaginative short story and absolutely worth the time to listen to, it's less than four hours long but holds a lot of adventure and interesting concepts. I'm planning on re-listening to it again in a week or two. The author Steve Vernon does a good job fleshing out intriguing characters and a neat world to place them in, and Brock Hatton does a decent job bringing them to life with his narration.

A funny thing happened on the way to my suicide...

As someone not really into short stories, I found this one refreshing and quite funny. If you like American Gods, consider this a nice tangent with a depressed,acerbic protagonist who is having the worst day of his life. The one liners make the story. I giggled upon learning that, in the spirit world, possession is 9/10's of the law and why cancer cells deserve Star Wars references.. At times I felt like I was pulled into a Naked Lunch hallucination only to be kicked through the front door of Valhalla. There are so many gems and memorable lines that I feel the need to incorporate a few of them in my list of insults. I would love to see the reluctant hero in a longer novel, as his story leaves plenty of room to be fleshed out. All in all, made for a good listen and I look forward to listening to other works by this author.

This was definitely a change of pace. I really enjoyed the characters and the interesting mix of mythology and modern religion. I would recommend this book to anyone who is looking for something a little off the beaten path. While the narrator wasn’t my favorite, I still think he gave a great performance.