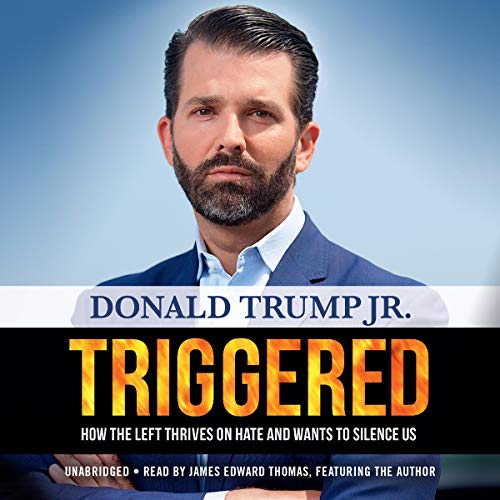 How the Left Thrives on Hate and Wants to Silence Us
By: Donald Trump Jr.
Narrated by: James Edward Thomas, Donald Trump Jr.
Length: 9 hrs and 41 mins
Categories: Non-fiction, Politics
4.5 out of 5 stars 4.7 (41 ratings)

In Triggered, Donald Trump, Jr., will expose all the tricks that the left uses to smear conservatives and push them out of the public square, from online "shadow banning" to fake accusations of "hate speech." No topic is spared from political correctness. This is the book that the leftist elites don't want you to listen to!

Trump, Jr., writes about the importance of fighting back and standing up for what you believe in. From his childhood summers in Communist Czechoslovakia that began his political thought process, to working on construction sites with his father, to the major achievements of President Trump's administration, Donald Trump, Jr., spares no details and delivers a book that focuses on success and perseverance, and proves offense is the best defense.

I love the logic-filled chapters of this book! It's refreshing to find out there are people thinking about country's well-being. KAG!

Donald has written a very personable, informative, and humorous narrative about his personal life and his experiences with his father's campaign. I can identify with him completely. I too am a Junior and the eldest child. My Dad was also a businessman and a hard charger like Donald's dad. His life and advice also made a big impact upon me and my brothers and sisters. Donald's insights concerning where the country is and is going provide great information and 'food for thought.' Plus it was enjoyable reading about someone else who likes the outdoors and fly fishing! It is a real man's account. But I would STRONGLY recommend it to anyone.

It’s just propaganda for the right

I wanted this to be a balanced and evidence based critique but it’s just an attack on the left in response to their attack on the right. It’s disappointing for its tabloid style and exaggerated tone.

Tells it as it is, the truth, ignore the left lies

I enjoyed the humorous writing style of DJT Jr. He holds nothing back, sharing stories from his earliest years that include a summer long visit to Czechoslovakia with his hard working grandparents, working heavy equipment in the Trump construction company, and being cut absolutely no slack while he learned the business.

All of this prepared him for and gave credence to his recounting of the time on the campaign trail, election night and the fiasco that has ensued for the last 3 years. You will find this info and more in “Triggered”. Trump Jr. provides some code crackers for buzz words that permeate the media today.. Additionally, there’s a chapter on the social media that’s just enlightening;
Is this book a fine piece of literature? Nope. It wasn’t meant to be. It’s a heartfelt accounting of events from a son who loves his father. It’s the truth, as he experienced it and much of what is said in this volume has been reported across many channels and pages.. An accounting of events, (albeit with an edge that might upset some), from a son who has temporarily given up his own path to support his father, who just happens to be POTUS📚

I have read ten books on President Donald Trump. This book is by far the best. It brings together biography, politics, and family history of the Trump family. If you only have time to read one book on the Trump political phenomenon, this is the one to read.

What most sensible people think

Well probably ALL sensible people....Just some are now too afraid to stand up for their opinions and beliefs through fear of attack from the Thought Police.
Hopefully most adults and students will start to wake up.

Go on Trump 2020 Keep America Great. Enjoyed this book which allows a little peak into the man that is Donald Trump Jnr and his dad DJT. Roll on 2020.

loved it well wrote informative and filled with humour, can't recommend enough, and I'm from the uk...you might want to give it a miss if your the snowflake type!, he has opinions, and you'll more than likely not agree...just go back to hugging trees

Absolutely Brilliant!! Well done..
Trump 2020
Much Love from the uk.
( A great insight)
Thank you

Exactly what I expected!

Don Jr lays out the facts in a very direct and to the point fashion. He discussed alot of details that I was already familiar but he had a different perspective as he has watched his father and family being attacked 24/7 by the Dems and MSM. Glad I purchased it.

PS- Even Audible is BIASED. I started reading Reviews as the book has a 4.9 Rating. I sorted the Reviews by "Most Helpful" and they were all negative comments even though there are just a handful out of 2500+ Reviews. PATHETIC!

If I could edit the foul language I'd give it a 5! Funny and informative.

What does Semper Fidelis mean? It means, “Always Faithful”, the Marine Corps Motto. I believe the entire DJT family has finally shown what this motto can mean when actually followed and adhered to. Thank you for giving the American people hope! Keep it up. As I know you all will. There are millions of us who are not on the “stage” with you but are surely roaring with admiration and thankfulness behind and beside you.

Thank you for fighting the fight no other politician I can remember has.

One of the best reads!

This was so real and revealing. Now I know who the TRUMP’S really are! God bless the Trump family and God bless America!
Larry S Johnson BCP!

This book is awesome!!

There is so much poignant information in this book delivered in an entertaining way! I thoroughly enjoyed the book!!

I loved the way this book flowed from history and details about the Trump family.

Most people will not take the time to listen to this if they are liberal but that is completely their loss.

Excellent narration and I’m looking forward to the next book from Junior.

I enjoyed Don Jr's take on poiticis in Washington nowadays. It's an outsider looking in point of view. it was very funny in parts. I enjoyed this book.

Good audiobook. if you like trump, good insight on trump family. I would recommend to friends

Absolutely the best book I have read this year. Thank you for the facts, and for making sure that your accomplishments are documented. It is very hard to compete with success. Keep up the great work. DJT rules!!

good read, too much of it was just ranting

wish he would have told more stories from out on the campaign trail and his childhood. those were my favorite parts. everything else is just ranting about how much Democrats suck