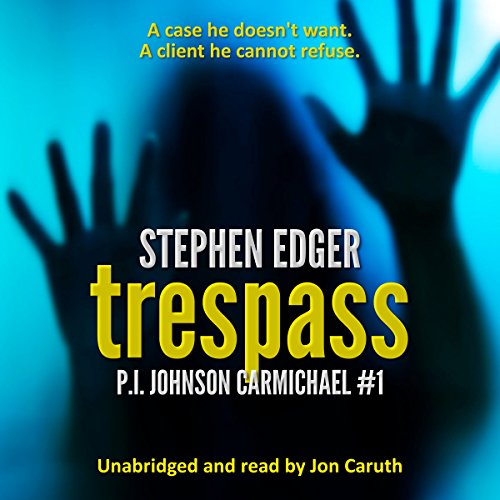 By: Stephen Edger
Narrated by: Jon Caruth
Try for £0.00

September 1989. Single mother Beth Roper is followed home and assaulted in her home while her four-year-old daughter, Lauren, sleeps.

May 1993. Known offender Nathan Green is tried and sentenced for the brutal assault of two women and the murder of a third.

November 2013. Lauren Roper hires Private Investigator Johnson Carmichael to prove that Nathan Green also assaulted her mother. With no evidence, no witnesses, and only the fragile memory of the client to work with, this is a case Carmichael doesn't want. When he begins to ask questions and his life is threatened, he realizes there is more to Lauren's claims than first thought.

Fear, murder, revenge, and unanswered questions. Trespass is another Southampton-based mystery from the pen of Stephen Edger.

What listeners say about Trespass

I finished Trespass a while back and have been pondering my review. I'd really like to give it 3 and a half stars, 4 is too generous and 3 is too mean. On the whole I enjoyed the story. I was most taken with Johnson Carmichael and his sidekick. I just found there were elements that stretched my credulity a tad too much. Although I went with it, those little niggles kept nagging at me. Saying that I thought Stephen Edger's writing was good and this particular private investigator is an interesting character with a fascinating back story. I shall invest in book 2, (Fragments), and see how I get on with that.

Would you try another book written by Stephen Edger or narrated by Jon Caruth?

Possibly a book by Stephen Edger. Not narrated by Jon Caruth

Would you ever listen to anything by Stephen Edger again?

A completely different narrator with more authority during the actual narration would be much better.

If you could play editor, what scene or scenes would you have cut from Trespass?

A new star is born