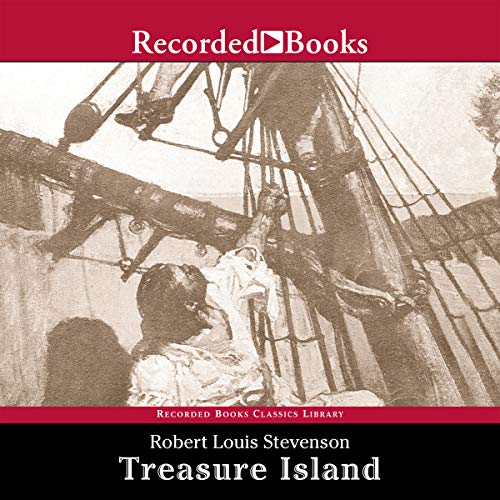 By: Robert Louis Stevenson
Narrated by: Neil Hunt
Try for £0.00

"Yo ho ho and a bottle of rum!" "X marks the spot!" Long John Silver with his parrot on his arm! Treasure Island, the 1883 masterpiece by the great Scot Robert Louis Stevenson, set the course for all-things-pirate to come. Its influence is inestimable.

This story of buccaneers seeking buried treasure on an island off the coast of Mexico is told through the eyes of Jim Hawkins, a teenager who gets mixed up in the pirate crowd. Hawkins is brought to life in this audiobook by the expert Neil Hunt, whose British tenor playfully rises and falls with the churn of the waves and the mayhem wrought by Billy Bones, Ben Gunn, and other immortal characters of this swashbuckling epic.

If you happen to find a map in a dead buccaneer's sea trunk, you can't very well ignore it, not if you are Jim Hawkins and his friends Dr. Livesey, Captain Smollett, and Squire Trelawney! But even with a map, buried treasures are not easy things to come by. At the start of his grand adventure, setting sail on the good ship Hispaniola, the young Hawkins is a hesitant, querulous boy, too easily beguiled by his own fancy.

By journey's end he will have faced murder, mutiny, and mayhem - and in the process, become a man. Narrator Neil Hunt brings to life the characters Robert Louis Stevenson made so memorable: Black Dog, Blind Pew, Billy Bones, George Merry, Israel Hands, and Ben Gunn.

What listeners say about Treasure Island

You won't be disappointed with this classic

I always wanted to read this. I thought I knew the story but realistically I hardly knew any of it and found it fascinating

Highly captivating tale that still manages to be fresh in 2017, even though it's been copied and parodied in countless forms since it first came to the public's awareness.

It has dated a little bit, however. Sometimes the 19th century rendition of 18th century pirate speak is a little hard to grasp whilst driving, and would be much easier in print. (Thankfully Treasure Island is public domain and copies of it are available online in various forms)

The narrator did a great job in bringing all of the characters to life and making each one distinct and recognisable. His Long John Silver is a very classic rendition.

This edition is ABRIDGED

This is not the original 'as published' edition of Treasure Island and nowhere in the publisher's information or description of the book on Audible does it tell you that this is an expurgated version meant for children.

Audible describes this book as "Unabridged" because in the audio version there are no changes from the paper edition BUT it never tells you that the paper edition itself is an abridgement of the original work. If you compare this audio edition with other audio versions offered on Audible, you will note that this recording is two hours shorter than other versions.

If you are looking for the "as published" edition, this is not it. If I had known it wasn't, I would not have bought the book--and I have learned that when it comes to classics on Audible, that "unabridged" doesn't necessarily mean "as published." (Audible, do you think you can do something about making this more clear in the future?)

An excellent job on a classic tale.

I was first introduced to this classic tale of pirates and adventure in preschool, where they had one of those dramatized abridgements that little kids often listen to before they read the full story. It wasn't until many years later that my brother began devoting some time each day to reading me the story, which he had received as a gift from an old teacher of mine in the hope that he might read it to me at some point. Due to my brother's moving out to go to college, however, we never finished it.
Three years ago now I found the unabridged version on CD, narrated by Neil Hunt. This being a copy obtained from my local public library however, some disks were damaged. So I was elated when I found that self same version here on Audible. Neil Hunt's narration is excellently done. All his portrayals, from Jim Hawkins to Israel Hands to Livesy to Long John Silver, are excellent. Needless to say I couldn't stop listening for more than a few minutes. Of course I've noticed that Recorded Books Incorporated, the company responsible for this unabridged recording, seems to have a nack for picking excellent narrators for their books, and Treasure Island is no exception. As I said in the title, an excellent production of an excellent, classic adventure story
.

Neil Hunt does an outstanding job with the characters' voices in his reading of Treasure Island. Before purchasing this particular unabridged reading, I sampled perhaps a dozen of the options available at Audible. Most of them I was able to rule out because of poor audio quality. I only hesitated about Hunt's reading because the narrative sections in the sample he seemed to read a trifle faster than was necessary, as though in a great haste to tell the story. But having come to the end of the book, I was so delighted with his handling of the dialogue between the characters that I can see I made the right choice in buying this recording. The story is a classic, of course, and while nothing profound, it is a great deal of fun. I highly recommend this audio book.

A fun classic which has aged fairly well

I wasn't exactly captivated by the story. In fact, it took me a few tries before I was able to really get into the book, and even then, it nearly lost me in the middle.

That being said, I got a huge kick out of finally meeting the character of Long John Silver, who Neil Hunt brought to life masterfully.

The tale was pretty interesting, and there were parts that were quite thrilling and engaging. I can see how it would have been an absolute gem in its time. Today's audience has been raised on movies full of epic adventures, so we're a little numb to a simple story like this. That being said, the narration helped to make it very relatable.

A great one -- both the story and the reading

What a fun trip into Pirate World! The reader of course makes or breaks any audio book, and Recorded Books consistently uses excellent readers. No exception here -- I enjoyed this from start to finish. Might even listen to it again.

While I enjoyed the book and my kids were entertained, like a lot of 19th century adventure stories I am more impressed by its staying power and influence than the story or writing itself.

The strength of 'Treasure Island' is its characters. Even minor players in this pirate/treasure/tropical adventure story are fascinating. The plot had enough ups and downs and twists to entertain, but like Jules Verne's and H.G. Wells' minor novels, Stevenson's writing just wasn't interesting enough to draw me back for a second draft.

Neil Hunt's narration was varied enough for the characters without being overly distracting from the story.

I have toured the Stevenson House in Monterey, California where it is said Stevenson conceived the idea for “Kidnapped”. Stevenson said he got the basis for the story of “Treasure Island” after drawing a map of an imaginary island for his stepson but when he lived in Monterey the scenery triggered the story. I had read the book, years and years ago when in elementary school. I reread it in 1959 after first touring the Stevenson house. When Audible displayed the book I thought I would reread the classic even though it is a children’s story.

The story takes place in the mid 1700s, on the west coast of England. Our protagonist is Jim Hawkins, the son of an inn keeper. An old sailor “the Captain” Billy Bones is a logger at the inn and pays Jim to keep an eye out for a one legged seafaring man. Billy has a stroke and dies, and then Jim’s father dies. Jim and his mother open Billy’s sea chest and discover money, a journal and a map. The district Squire Trelawney obtains a ship and hires the local physician Dr. Livesy as the ship’s doctor and Jim as cabin boy. He hires a crew including Long John Silver as the cook along with his talking parrot. They sail off to find the pirate Captain Flint’s Treasure Island.

The story was published as seventeen weekly installments in the “Young Folks Magazine” from 1 October 1881 to 28 January 1882. It was later published as a book. Stevenson wrote “The “Amateur Emigrant,” “The Pavilion on the Links,” and “A Vendetta in the West” while living in Monterey. Stevenson said his time in Monterey influenced his writing in many ways, the scenery; the people of many nations living together gave him many ideas for stories. Needless to say the book is well written and Neil Hunt did a good job narrating the book.

The first pirate story and a good one. Neil Hunt does a great job in the narration.

The story that has become the reference book for all things Piratey.
Whether fiction or fact, the expressions used by the pirates in this story have become well known by a new generation via the Pirates of the Caribbean movies.
Robert Louis Stevenson is a master story teller and Neil Hunt is a delight to listen to.
A skilful, sensitive and talented performance.

I needed a break from some longer, more intense audiobooks, and this was perfect! The story is quick-paced and interesting, set in a time long ago surrounding pirates, treasures, mutinies and betrayals, doctors and young men... All great elements for a thrilling book. The reader is very expressive and carries the pirate dialogue so well it's like you're listening to real pirates. Highly recommended, arrr! :)