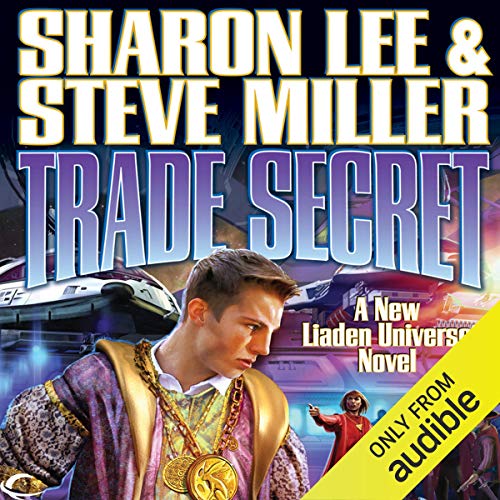 In a universe full of interstellar intrigue and burgeoning commerce novice Terran trader Jethri Gobelyn, adopted by a Liaden clan after an ill-directed bow of honor insulted the scion of a major Liaden house, is alive and whole to tell the tale. Convinced that the adoption has saved his life and made his future he settles into a comfortable and even elite routine, a Trader's Ring his goal.

Even as Jethri's initiation into the mysteries and joys of Liaden Festival bring him to manhood, he's forced to face Necessity and the facts of life: his adoption has also invigorated a net of unfinished Balance far more complex and potentially deadly than a simple Terran blood feud. He must embrace his Terran birthright as well as his Liaden connections while leaving behind the safety of the great Liaden trade ship Elthoria to defend his honor and that of shipmates past and present.

Forced to sit Second Board as a back-up pilot on a Liaden Scout ship, Jethri's convinced he's already at wit's end - when several familiar faces threaten all that he knows of himself, and all that he wishes to do.

What listeners say about Trade Secret

More fun I think if it's not your first Liaden tm book, but can stand on its own. Has some frank talk about sex so you might not want to listen to it with your kids, but the sex is consensual and mostly left to the imagination of the reader.

Trade Secret is a worthy sequel to Balance of Trade. My only complaint is that it will be a long time until we hear any more from Jethri Gobelyn, since any further adventures for him will need to wait until the authors complete a current round of 5 books already under contract that are timed later in the Liaden Universe.

Trade Secret tells the ongoing story of Jethri Gobelyn, now adopted of Clan Ixen and associate trader on Ixen's trade ship Elthoria. I very much enjoyed the continuing story of Jethri, and wish we could have more. My only real complaint, and it's quite minor, is that I'm finding the reading of Kevin T. Collins less satisfying this time around. The pace feels just a trifle rushed, with the need for a bit more emphasis of the spacing in the story. But still well worth the listen.

Another great tale from the Liaden Universe.

Looking over Jethri's shoulder as he assimilates into Liaden culture opens a window for readers.

The story is gripping and the performance pulls the listener right into the middle of the action.

What would have made Trade Secret better?

I have liked and enjoyed many of the previous books in this series. Normally they are action-packed, character driven, great books with a wonderful dry humor running through them. This one however, drags to an unbearable level. The authors kept going off into detailed tangents that made no sense or had no purpose. I'm half way though this book and can barely force myself to try to finish it. I will only because it may affect the overall story arc.

What could Sharon Lee and Steve Miller have done to make this a more enjoyable book for you?

It is like this book is a series of unrelated scenes that should be related to one another but you can't clear away all the trivia to understand what the point is. It starts with the main character reading an incredibly boring book while thinking about the salient points in the authors' previous book about this character. Then his mother tells him he has to have sex for the first time and he complies. Then he is riding around in a scout's spaceship on a matter of honor because the scout lost a notebook. In the background the "enemy" is having sex and compiling complaints against people who have wronged him. Meanwhile he learns some things about his deceased father and that the woman he grew up thinking as his mother who was really horrible to him. After more than 7 hours you expect a bit more from a book.

I have not listened to this actor's performance before. Maybe it was the lackluster matter that made this so hard to listen to.

What character would you cut from Trade Secret?

I normally love to read these authors' books, but this one missed the mark. I read the other reviews with a bit of disbelief wondering if we are reading the same book. Maybe the 2nd half of the book will be so good I will have to edit this review...but I am not holding my breath.

Jethri Gobelyn is now an adopted son of Clan Ixin, and he's back on his new mother's trade ship, Elthoria after his time on Irikwae learning Liaden ways and getting his certification as a junior trader. He still has a lot to learn, though, and when Scout ter'Astin arrives with word that the book and other items Jethri entrusted to the Scouts for study have been stolen by someone inside the Scout, it sets in motion a much riskier "learning experience." He's soon off with ter'Astin, pursuing his stolen property and representing Clan Ixin as a trader without the backup of his new mother and his friend s on Elthoria.

Meanwhile, his old ship, Gobelyn's Market, is going through its own complex challenges, and adjuting to the absence of Jethri, who was the least important crew member as long as he was with them. And their secrets, long-buried secrets involving Jethri's father Arin. Those secrets are going to have repercussions on both sides of the Terran-Liaden divide.

Oh, should I mention that Uncle makes another appearance?

There's action, politics, and even, as Jethri starts to move in Liaden society as an adult, romance.

The only real question is whether he can survive his adventures.

This is a lot of fun, a really enjoyable addition to the Liaden universe. Recommended.

I bought this book.

A great follow-up to Balance of Trade, and I certainly hope there will be more in this series.