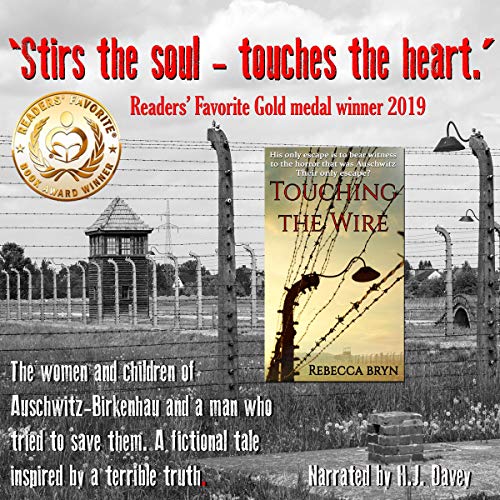 This title has been awarded a Gold Medal in the Historical Fiction event/era genre in the Readers’ Favorite 2019 Book Awards.

A fictional tale of love and darkness in Auschwitz-Birkenau, and of every man and woman who bore the Auschwitz tattoo or was interred in Nazi death camps throughout World War Two, this Holocaust love story is inspired by real events. It is a tribute to the courage of victims of Nazi war crime during the Holocaust, sadly a part of Jewish history. The horror of Holocaust experiments carried out under the auspices of war and Hitler's obsession with a master race, are hard to understand, impossible to condone, and difficult to imagine forgiving. The human spirit that can find love in such a place must be rare indeed, but a person in dire circumstances will grab at a kindness where it is offered. Such is the premise of this story, and it asks the question, "Could you forgive?"

Part One transitions between 1944-45 and the 1970s and continues in Part Two in the present day.

Part One - In the Shadow of the Wolf

In a death camp hospital in 1940s Poland, a young doctor and nurse struggle to save lives and relieve the suffering of their women patients. As their relationship blossoms, amid the death and deprivation, they join the camp resistance, and despite the danger of betrayal, he steals damning evidence of war crimes. Afraid of repercussions and for the sake of his post-war family, he hides the evidence, but hard truths and terrible choices haunt him, as does an unkept promise to his lost love.

Part Two - Though the Heavens Should Fall

In present-day England, his granddaughter seeks to answer the questions posed by her grandfather's enigmatic carving. Her own relationship in tatters, she meets a modern historian who, intrigued by the carving, agrees to help her discover its purpose. As her grandfather's past seeps into the present and more carvings are discovered, she betrays the man she loves and is forced to confront her own guilt in order to contemplate forgiving the unforgivable and keep her grandfather's promise.

What listeners say about Touching the Wire

This is powerful story, expertly developed and told by a master storyteller. I became engrossed in the sometimes harrowing storyline but was so invested that I couldn't do anything other than continue. A lighter, more agreeable theme then takes over and balances out the story which then develops and intrigues as a mystery requires investigation. The moving conclusion left me with mixed emotions in regard to several of the leading characters but in a good way and in no way detrimental to the story.

A beautiful sad an tragic story

Absolutely love this story. It has it all. The tragedy torture and torment of The poor souls who found themselves in Hitler’s death camps, and what people had to go threw just to survive, and how this would tear families apart in the future to uncover the trueth an lies of days long ago. Of course you couldn’t have a story filled with pain and unhappiness without a love story. I’m so glad I made the time to listen. The Author manage to keep me enthralled from beginning to end, loved every minute. It’s a real page turner 😎. While the narrater wasn’t brilliant I Believe that he is a great choice to tell Rebecca’s story. His voice was smooth as silk, an his English accent is real easy on the ears. My only hope is that you dear listener enjoy this as much as I did. Many thanks to mrs Rebecca Bryn for sharing her story with us. Howard J. Davey for his narration. An to every One else who made this an awesome listening experience