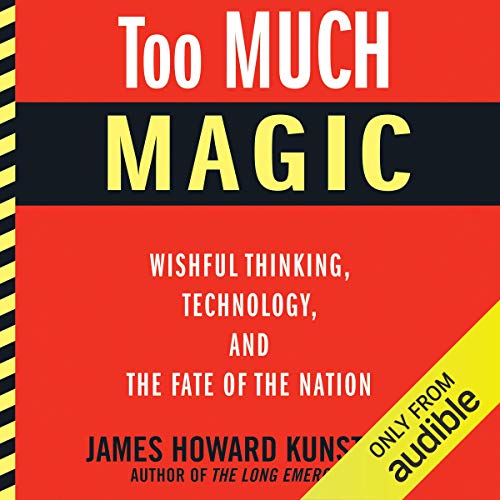 Wishful Thinking, Technology, and the Fate of the Nation
By: James Howard Kunstler
Narrated by: Eric Jason Martin
Length: 10 hrs and 13 mins
Categories: Business, Commerce & Economy
4.5 out of 5 stars 4.5 (4 ratings)

James Howard Kunstler's critically acclaimed and best-selling The Long Emergency, originally published in 2005, quickly became a grassroots hit, going into nine printings in hardcover. Kunstler's shocking vision of our post-oil future caught the attention of environmentalists and business leaders alike, and stimulated widespread discussion about our dependence on fossil fuels and our dysfunctional financial and government institutions. Kunstler has since been profiled in the New Yorker and invited to speak at TED. In Too Much Magic, Kunstler evaluates what has changed in the last seven years and shows us that, in a post-financial-crisis world, his ideas are more relevant than ever.

"Too Much Magic" is what Kunstler sees in the bright visions of a future world dreamed up by optimistic souls who believe technology will solve all our problems. Their visions remind him of the flying cars and robot maids that were the dominant images of the future in the 1950s. Kunstler's image of the future is much more sober.

With vision, clarity of thought, and a pragmatic worldview, Kunstler argues that the time for magical thinking and hoping for miracles is over, and the time to begin preparing for the long emergency has begun.

©2012 James Howard Kunstler. Parts of this book appeared in a different form in Orion Magazine, July 2011,and Salmagundi, a Quarterly of the Humanities and Social Sciences Nos. 168-9 Fall 2010–Winter 2011. Recorded by arrangement with Grove Atlantic, Inc. (P)2014 Audible Inc.

well worth you time to think and consider the future which may await us all.

I believe that what this book says is true, but how does the song go? "I'd love to change the world, but I don't know what to do... so I leave it up to you." He does not tell you what to do about it, not at all. He lays blame to all of the people and decisions he feels are responsible for this. Basically, our society is enjoying itself, with no thought for the future. As for myself, if I was going to heed what he says, I would plan on solar cells for my house, wood heat for the winter, steam engine technology for electricity run off of the wood heat. If you haven't already, I would start by getting out of the city, go to an agricultural town where food is plenty, and have a hand pump well available. You can hook a wind mill up to it later. In short, this is a prequel to any prepper book that you might read on the market. Actually, speaking of markets, you might think about shorting the markets that will fail when petroleum runs out. Invest in the ones that will make a big one the panic sets in. All in all, it is a thought-provoking book.

The End Is Coming, No Really, It Is

Being an environmental science school teacher and a hobby economist, I easily followed along. Mr. Kuntsler is logical, not fanatical. Some of his premises are arguable, but not insane. Even if I don't agree with everything he proposes, his most weighty point hangs on me: How is it that Americans are intoxicated with the elixir of technology? And why are dissonant voices ridiculed? For myself, I'd rather we all at least hedge against knowable, potentially disastrous outcomes. I'm not taking about an asteroid collision. But the more probables like climate alterations, populations crashing, and core resource shortages, especially for peoples living in megacities! Heck, I have a safety net for my family today, but what about my children tomorrow, or my grandchildren further out? Our government certainly isn't preparing for our childrens' future. So, who is? Or who will?