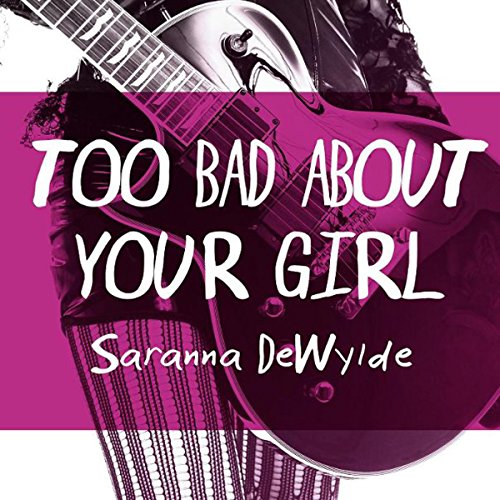 Too Bad About Your Girl

Too Bad About Your Girl

Kerrigan Black is the hard drinking, hard partying, and even harder working frontwoman for the riot grrrl band Sugar and Cyanide. She keeps her relationships simple - she doesn't have them. But she has sex and a lot of it. For Kerrigan, it's not about the orgasm; it's about the power she wields over her partners. Kerrigan doesn't do love. At least, she didn't until her bandmate and best friend - the one woman she can never have.

Dia Miller is good at revenge, so when she finds her boyfriend in bed with another woman, she decides to return the favor. She asks Kerrigan to pretend she and Dia are lovers to punish him. The show goes a little too far and feels a little too good. Dia, ever the hedonist, can't resist exploring new sensation.

Will fulfilling Kerrigan's secret fantasy and satisfying Dia's curiosity shatter the bond between them or give them something more, like Happily Ever After?

This title is an F/F romance.

It's only Rock N Roll But I Like It

If you could sum up Too Bad About Your Girl in three words, what would they be?

I liked the characters. They were believable and the relationship between the female leads was sweet.

She was good. She put the different personalities and emotions across well.

Yes - though I couldn't. I listened to it on two journeys in the car.

It's a short story and I notice that it's the only F/F romance this author has written. If she wrote more lesbian romance I'd read it.

I wish the story was longer. All in all, the story was complete from start to finish. The main characters seemed well rounded, but I wish there was more to this.

Kerrigan, in particular, was a great character and I wanted more!

Hollie Jackson did a great job with the narration. The story was a good quick listen that I finished in a day.

Most Brilliant short story about how two wrong heart fall for each other in love.

Your Best Friend Can Make Music

Dis and Kerrigan are Sugar and Cyanide, a music duo. They have always been best friends. Dis plans revenge on her cheating boyfriend by asking Kerrigan to pretend to be her lover. What can possibly go wrong? Fun, fast listen and story. Recommend.

This isn't typically my genre of book to read/listen to but I liked it. It was supper cute.

Great story, but way too short.

Wish there was more or perhaps a sequel to look forward to. Write more - please!

Another Forbidden Fruit story With Rock-N-Rock

If you could sum up Too Bad About Your Girl in three words, what would they be?

The Lead for a All Girls Rock Band goes through woman like she is swimming in water, because she can't have the one girl she is in love with but won't admit even to herself, the other lead voice in the band who has worthless boyfriend. One day the worthless boyfriend comes up with a idea to have a three some with the Lead and it's one step too far for the voice comes with an idea of her own to pay the boyfriend back, she and the Lead will pretend to be lovers and twist his knickers into to knocks. Only the voice find she really is in love with the Lead who this game is about to kill her and she is ready to walk away and just about does that, until the voice dump the boy friend and chases after her in the night for a happy end? Maybe It is full of drama and twist for two people examining way and how of their love.

The basic Girl falls for Girl Hard story and you have to feel sorry for some who has carried a torch so long and some so blind to the one person who has been there for the whole time.

The voice of the reader was perfect, she made you feel both the old rock and roll woman who been around, and the young existed girl who fill got her head if not straight at least moving forward.

It;s an old story but if they made a film I would love for them to have Melissa Etheridge play the Lead singer Part, and some like Katy Perry for the voice part, or some one like Michelle From Glee (Sorry her last name is gone from my MS infected brain) But it needs to be someone with a voice that can match Etheridge but is high strung, Pink would be good too. Just someone younger.