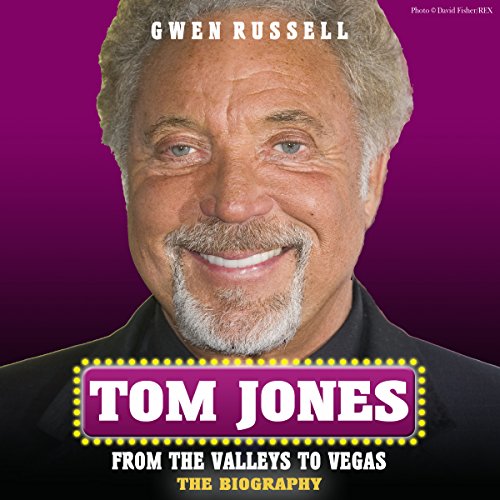 By: Gwen Russell
Narrated by: Geoff Barham
Try for £0.00

Celebrity biographer Gwen Russell traces Tom's phenomenal journey from his first South Wales gigs as an unsigned frontman, to his breakthrough hit 'It's Not Unusual' and beyond to his superstardom as the voice behind 'What's New Pussycat', 'Delilah' and 'She's a Lady'.

But it has not all been plain sailing for the legendary Grammy- and Brit Award-winning entertainer whose shows are renowned for knicker-hurling frenzies. Tom was struck down by tuberculosis and bed-ridden for almost a year; he has had affairs; lost his long-time manager to cancer; and ridden the quiet times in his career to come out on top.

His collaborations reads like a who's who of pop and rock histoy and includes Johnny Cash, The Bee Gees, Robbie Wlliams, Pavarotti, Jools Holland and The Cardigans - not forgettong, of course, his recent Comic Relief rendition of 'Islands in the Stream,' with Gavin and Stacey characters Bryn and Nessa. This informative and affectionate account includes recollections from famous friends, relatives and contemporaries. It paints a complete portrait of one of Britain's most talented men; a true national treasure.

What listeners say about Tom Jones: The Biography

It was long winded and repetitious. I persevered but it didn't improve. The author was telling the story in her words not Tom's. It kept referring to Tom and his wifes relationship and comments from his family members and very few of Toms own words.

The book would have been a little better if an actor with a Welsh accent had been used. It was not Geoff Barham's fault but the words themselves.

Could you see Tom Jones: The Biography being made into a movie or a TV series? Who would the stars be?

Not his particular book. If a book was actually written by Tom Jones or in his own words that would definitely make a good movie/TV series. I can't think of anyone who could fill Sir Toms boots!

Sir Tom has had a fantastic rags to riches life. Keeping his feet firmly in his Welsh roots although there was all the temptations of Hollywood and Las Vegas. There must be a wealth of content to be recorded and I hope Sir Tom has a go at doing it in his own words. He sure has had an incredible life so far and this book skirted over most of it and surmises a lot of it.

Fantastic well read would listen to it again , would defiantly recommend to everyone that is a fan of Tom Jones t

I guess when I purchased this book I was looking to find out the truth. Maybe someone who's done good things with all his good fortune, maybe someone totally different than his public persona or maybe just a great story. It just turned out to be a rehash of old news. His public persona is exactly who he is. The private person that leads a life of excess and personal gratification. A man that's morally bankrupt I bought the audio version so I was able to jump past the cheating after the first few. I thought, at first, he would graduate from his ways with maturity, but it doesn't happen. He excused his behavior by qualifying his love for his wife and solid marriage. Love without respect, a joke! This man says he's a great dad, but his son isn't like him. Probably because he saw how it hurt his mother. I could go on and on, but I'll just say, if you heard and read all the reports of his public romps, you'll waste your money on this book.