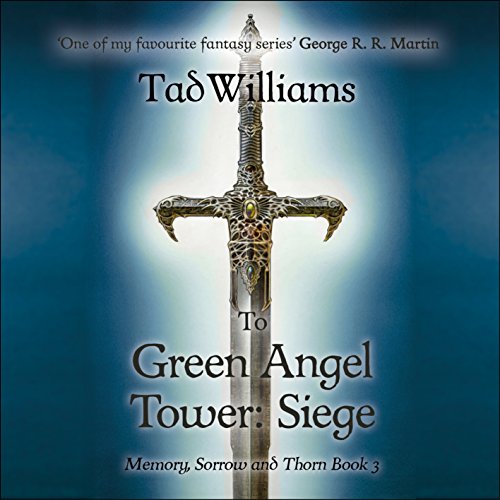 By: Tad Williams
Narrated by: Andrew Wincott
Try for £0.00

Part one of the epic conclusion to Tad Williams' classic fantasy series Memory, Sorrow and Thorn, set in the fantasy world of Osten Ard.

In order for the Storm King to cement his power over Osten Ard, he must find and defeat the rebel forces massing against him. But the rebels, led by the exiled Prince Josua, have rallied at the Stone of Farewell and are ready to fight the Storm King with every power they can muster.

The key to their victory lies in finding the third sword of legend, Memory - but the sword has been lost for ages. Lost, that is, until Simon Snowlock realises that he knows exactly where the sword is and how to recover it. The only problem: an undead army, bolstered by powerful magic, lies between him and his destination.

What listeners say about To Green Angel Tower, Part 1

The quality of story and performance continues in this penultimate part - keen to hear the final book but sorry it has to end!

Another great reading of a wonderful story

I am completely caught up in this world now!
The story is epic, many-layered, full of great characters.
The performance is truly excellent, I don't know how Andrew Wincott manages to make each person, mortal or Sidhe sound so different.

Classic fantasy, you can't beat it!

This 'trilogy in four parts' is superb, well written, gripping - and completely ripped-off by. George R R Martin. It preceded 'Game of Thrones' by four-five years, and GRRM has acknowledged he had read it. Just a couple of examples:? 1. Throne - only of dragon bones. 2. Mysterious evil undead creatures invading from the frozen north. 3. Dysfunctional royal family, etc etc. However, the women are strong feminist characters, not merely there to be stripped and raped, and although there's plenty of horror and nastiness there's also humour and beauty. The mystery to me is why it's out of print and - shame on you Audible!- volume 4 has still not been recorded and isn't due until May 2016!

The story is still compelling, the plot is slowing down slightly but am excited to see where Tad goes with it. Andy needs to have a serious word with himself about his female/mystical voices though, far too Breathy and sharp (can be uncomfortable to listen for the longer stretches of dialogue) and all the same which breaks emersion.

As with all things Tad Williams it is extremely detailed and you sometimes feel limke you want to explode with the urge to yell" get to the point!!!" But intheendit makezs for an amazing story. You want to know how it is going to continue and whether the winter king is going to be defeated before the main characters die or not.

Great read once again looking forward to book 4 of the series. Would highly recommend this series

I fell in love with these books when I first read them probably 20 years ago. A huge fantasy story in what I would call low fantasy setting. Characters are fragile and you worry for them and root for them. Listening to the audiobooks has been fantastic. the narrator does a brilliant job of delivering the story. I tell a great narrator when I forget it is being read and simply live the story and hear the characters whilst listening. Wincott achieves this with 5 stars.

moves along a bit swifter than the first few books. enjoyable to listen to though wish the narrator had a few more variations in accents and left bigger gaps between changes in story location as sometimes i missed the gap and wondered what in earth was going on as the characters changed....

enjoyed this book a lot, it resolved much of what has happened, and sets things up well for the next book!

Great story but felt that this dragged

I am glad that I got through this book however out of all of them it was the hardest to get through it felt like large parts of it dragged.

What other book might you compare To Green Angel Tower, Part 1 to, and why?

This is very good and I would say that if you enjoy the mageborn series, dawn of wonder, and the cycle of Arran that this would be a series for you

Have you listened to any of Andrew Wincott’s other performances? How does this one compare?

Could you see To Green Angel Tower, Part 1 being made into a movie or a TV series? Who would the stars be?

I could see the series being made into a series. It would need a good budget although.

Great series, in my opinion this is the weakest book just because I felt it could of been a lot shorter.

Fabulously imaginative and inventive. Superb narrative. I was sorry to hear the unexpected end. Must buy the next!