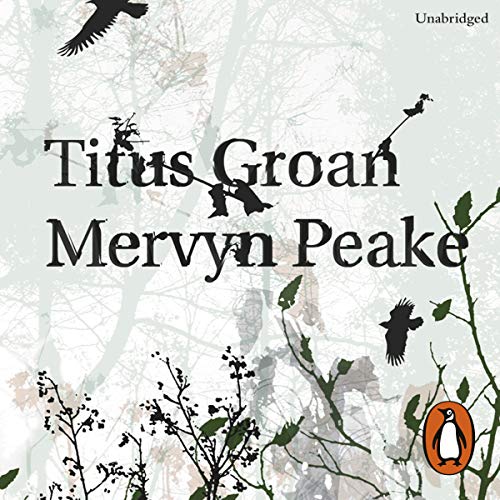 As the first novel opens, Titus, heir to Lord Sepulchrave, has just been born: he stands to inherit the miles of rambling stone and mortar that stand for Gormenghast Castle. Inside, all events are predetermined by a complex ritual, lost in history, understood only by Sourdust, Lord of the Library. There are tears and strange laughter; fierce births and deaths beneath umbrageous ceilings; dreams and violence and disenchantment contained within a labyrinth of stone.

It is a masterpiece, a work of art, full of grotesques and plot machinations that you could simply not predict. A work of delightful eccentricity.

What other book might you compare Titus Groan to, and why?

The fact that I have come across nothing like it before is another mark of its calibre - a true original.

The novel is crammed full with elaborate and delicately wrought vignettes - to call any a 'scene' seems like sacrilege. I will say that most of the characters seem like mere caricatures at first but are crafted in such a subtle way that as you read on they become thoroughly three dimensional.

I would compare it to a box of jewels: each character and episode so diverse yet so captivating.

It's about thirty years since I first read the Gormenghast trilogy. It certainly hasn't lost any of its power. This is a great reading and the characters are captured really well. I really enjoyed this revisit from an old friend.

Would you consider the audio edition of Titus Groan to be better than the print version?

I've read some of the Amazon comments relating to book/kindle version - their reviews are better written than I can, echoing having read it as a child many times and being absorbed by this world created by Peake that can not be compared directly to anything else written.

Having listened to the Millenium Trilogy also read by Saul Reichlin I knew I could trust listening to him throughout this Trilogy - and I was more than impressed. He has brought the characters and particularly the language to life in a way that I don't remember from reading it myself. He has been able to add more to it for me.

I have found it one of the ultimate experiences that a novel can give - to be lost in another world, be transported somewhere else in time and place, to visually see, to emotionally feel, and I can not imagine a better spoken performance than that given to us by Saul Reichlin.

Brilliant and hard to categorise

Where does Titus Groan rank among all the audiobooks you’ve listened to so far?

Terriffic audio performance, bringing a wide range of characters to life. It's an absorbing world that the audiobook transports you into - beautiful stuff!

What other book might you compare Titus Groan to, and why?

Well, you can't really - I'd always assumed the GG trilogy was a fantasy, LOTR type thing, but it's not. It's a poetic family saga that seems to be a link between Dickens, Stoker & Carroll and Monty Python, Harry Potter and just about every 80's Goth album. Astonishing that it was written in 1946.

What does Saul Reichlin bring to the story that you wouldn’t experience if you had only read the book?

The characterisation of the grotesque dramatis personnae is fantastic - his Prunesqualor is hilarious, Nanny Slag pathetic and twins dumb. ('Scuse the spellings)

It would be "Prepare to be bored" it just wouldn't work (as the BBC found out) as, well tbh, given that it's 22hrs long, not much actually happens. It's the poetic beauty of the writing that really makes this stand out.

To be critical, this is a cruel book, it could be accused of being mysoginistic (hope that's spelt right!) and I found the passages with Cada (sic) desparately dull but it really is a dark gem. Dive in!

This is my favourite book, I've read and listened to Gormenghast repeatedly. The performance is great but a few of the voices put me off and broke the magic for me in places.

I have never read (or listened to) a more emmersive book as this, and I can imagine the author had great delight in writing it. Alas, for us mere readers it is painfully slow with no story or characters that entice you to know what happens next. But as the introduction says, it is a book from another time that would very likely never be published in todays literary world.

That said, I did enjoy hearing how the language was used, which is amazing. The performance, especially of Dr Prune, is outstanding and the only thing that carried me onto the end.

Years ago I read Titus Groan trilogy's . I love them , not only the story's but the description of characters, and the place and surroundings. The atmosphere it created in the descriptions , were exceptional .
So eager to listen to this in the comfort of home , to absorb the story No No No!!!
Instead I got an narration, that was so sterile he could have being reading a railway time table . How to destroy a excellent story then listen to this. I was mortified.

A very good reading of this

I really enjoyed this reading. Saul Reichlin very easily depicts this world and had a real appreciation for this story.

The style of writing is self indulgent, although charming: It has a poetic quality. The pace is slow and the plot, which is character driven, is meandering and weak. The characters are vividly portrayed and engaging. The setting is eerily fantastical. There is a dreamlike quality to every aspect of this modern classic.

Saul Reichlin’s performance is faultless. He brings the characters to life and enhances the poetic rhythm of the script with his unhurried pace.

A troll miror image of the human condition

I laughed a lot. This is one of the strangest styles of writing I have experienced. The narration in it self, makes the story worth listening to.

Some of the most incredible use of English I have ever experienced. Excellent reader. Highly recommend.