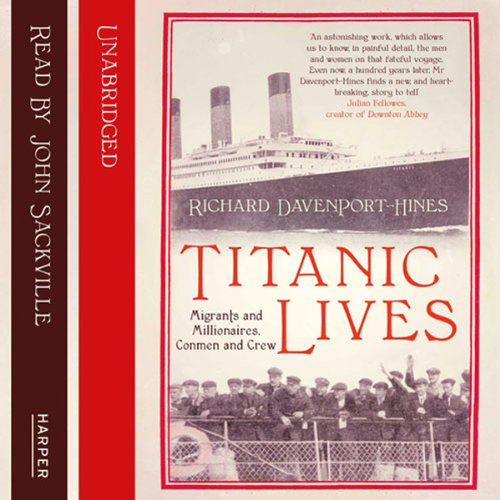 By: Richard Davenport-Hines
Narrated by: John Sackville
Try for £0.00

Marking the centenary of the Titanic, A Shape of Ice is an utterly compelling exploration of the lives on board the most famous ship in history. The RMS Titanic was built as one of the world's largest and most luxurious liners. A marine Ritz, it was a 45,000 ton hotel of thin steel plates, travelling at a speed of 21 knots across the unforgiving ocean.On the night of 14 April 1912, the seemingly unsinkable ship hit an iceberg. It sustained a 300 feet gash and six compartments were wrenched open to the sea. In little over two hours, the palatial Titanic nose-dived to the bottom of the North Atlantic. Terribly mismanaged, there were not enough lifeboats to carry passengers to safety; over 1,500 people died that night.Who were the Titanic's passengers? In this original and timely book, Richard Davenport-Hines examines the great liner as a social portrait of the Edwardian age; above the squalor of steerage, filled with emigrants moving to the New World, were hundreds of second-class passengers buoyed up by their prosperous respectability. Higher up were the hereditary rich and at the pinnacle stood those of inconceivable wealth - Americans like John Jacob Astor IV, who was found with £2000 and $4000 in sodden notes in his pockets.Bringing together over 2,000 passengers and crew from every class and five continents, A Shape of Ice tells their stories, re-creating the complexities, disparities and tensions of life one hundred years ago.

‘An astonishing work, of meticulous research, which allows us to know, in painful detail, the men and women on that fateful voyage. Even now, a hundred years later, Mr Davenport-Hines finds a new, and heart-breaking, story to tell." (Julian Fellowes)

What listeners say about Titanic Lives

Too many people to keep track of, and too much minutiae of their lives (with no way of keeping track of what happened to whom, which would have made these stories much more poignant. Narration is good, and when dealing with the disaster and aftermath for those who were saved and who survived those who died, the book really starts to come alive.

This was a good, book but it wasn't what it said it would be~I would say a good 60% of it had little or nothing to do with Titanic. The book jumped around a lot one minute they're talking about embarkation on Titanic, and the next moment they are at the trials after it sank. It needed to be organized a bit better but there was a lot of information.
One good point he mentioned what the breakfast menus were on the ships, in all three classes, (though it was in very different points in the book) that was very interesting and was something I hadn't known before.
This book veered off to tangents very often, and too often in my opinion. It talked about a lot of things that had nothing to do with Titanic and I feel that it could've been shorter and there could've been more stories about Titanic. There're a lot of stories I know, as someone who has been a Titanic buff for years, that were not mentioned in this book at all.
He never mentioned Morgan Robertson's book "Futility" which was a foreshadow of the whole disaster written in 1898 I thought that would've been a fascinating thing to explore but it wasn't mentioned. The whole story about the Allison family was really gripping, and it was barely mentioned not really mentioned at all actually and yet they went on and on and on about immigrants from different ships in different time periods for what felt like hours, it was interesting, and I learned a lot, but it wasn't about Titanic which was why bought this book.