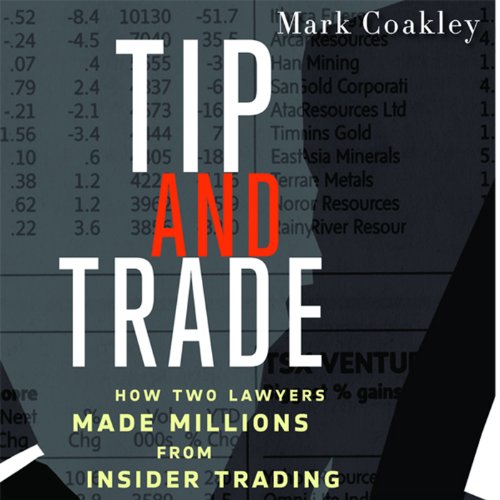 How Two Lawyers Made Millions from Inside Trading
By: Mark Coakley
Narrated by: Christopher Prince
Length: 10 hrs and 40 mins
Categories: Crime & Thrillers, True Crime
3 out of 5 stars 3.0 (1 rating)

What could lead one successful lawyer to suicide and another to a 39-month prison sentence? Perhaps filching over $10 million dollars from Wall Street and the Canadian equivalent, Bay Street. The calm and assured voice of veteran performer Christopher Prince details all the ins and outs of the high stakes schemes Gil Cornblum and Stan Grmovsek conducted that made them first wildly rich, then ultimately the notorious poster boys for insider-trading. From Canadian author Mark Coakley, Tip and Trade: How Two Lawyers Made Millions from Insider Trading is a thorough examination of the largest insider-trading scandal in Canadian history.

The story of a friendship that started in law school and ended with the largest insider trading scandal in Canadian history, this eye-opening chronicle reveals for the first time how Gil Cornblum and Stan Grmovsek worked together to rip off Wall Street and Bay Street - the Canadian Wall Street equivalent - for over $10 million. Cornblum would scout around his law offices in the middle of the night, looking for confidential information on mergers or takeovers. When he found something, he would tip off Grmovsek, who would make the stock market trades that would gain them illegal profits.

From the joint internal investigation by the Ontario Securities Commission, the U.S. Securities and Exchange Commission, and the Royal Canadian Mounted Police Integrated Market Enforcement Team, to Cornblum’s resultant suicide and Grmovsek’s 39-month prison sentence, Tip and Trade covers the discovery of the double lives of the twosome and their inevitable downfall. First-person interviews, conducted with Grmovsek from prison, give insight into what case prosecutors called a classic "Hollywood” insider-trading history.

A book about not much

The author says it himself. Not much happens to write about. Guy finds inside information at work, calls friend, friend invests, they make or loose some money, repeat, repeat. The story is important and and well told but insider trading is not the most exciting crimes to read and write about. I recommend Den of thieves if you want to read about insider trading.