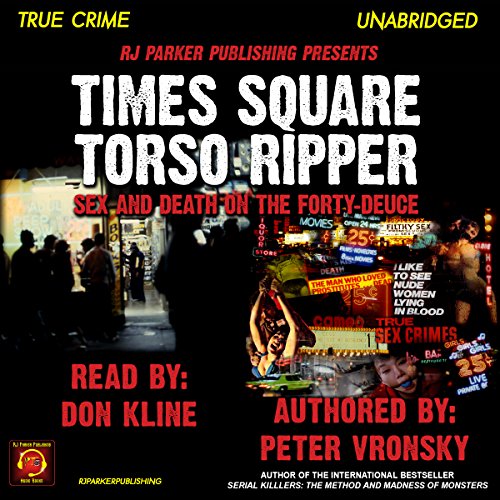 Warning: Contains explicit language and graphic descriptions of extreme sexual violence and depravity that some may find highly disturbing.

The story of Richard Cottingham, the "Times Square Ripper" or "Times Square Torso Killer", one of America's most sadistically depraved serial killers.

Historian Peter Vronsky describes his brief encounter with serial killer Cottingham in a seedy New York hotel in 1979 that later inspired him to write his best-seller history Serial Killers: The Method and Madness of Monsters. In Times Square Torso Ripper, Vronsky explores the history of the notorious Forty-Deuce strip on 42nd Street near Times Square and how it spawned the sadistic monster Richard Cottingham in an era before the term "serial killer" had been coined in popular culture.

Renowned serial homicide expert Dr. Robert D. Keppel said of Richard Cottingham, "I kept asking myself what it was that ultimately intrigued me about the Cottingham case. Partly it was the level of sadistic torture that Cottingham acted out on his victims. He didn't kill them and desecrate their bodies; he forced them to experience pain and humiliation before he killed them. Then he desecrated their bodies."

I want my credit back

This narration was awful. Please give my credit back. It's very bizarre, I do not recommend it.

While the story was of interest to me, I didn't even finish 1/3 of the book due to the performance of the narrator. There were pauses where there shouldn't have been, emphasis on the wrong words and very slow reading. I even adjusted the speed of playback and it was still so annoying, that I just stopped listening and went to the next book in my library. I will not purchase another book that uses this narrator.

It wasn't a great listen. I am fascinated by the gory details and what thought patterns drive a killer to do what they do. No real insight into the why, what, or the how. Not a total flop though. I was kept interested and finished the book. Not worth the 10 bucks though