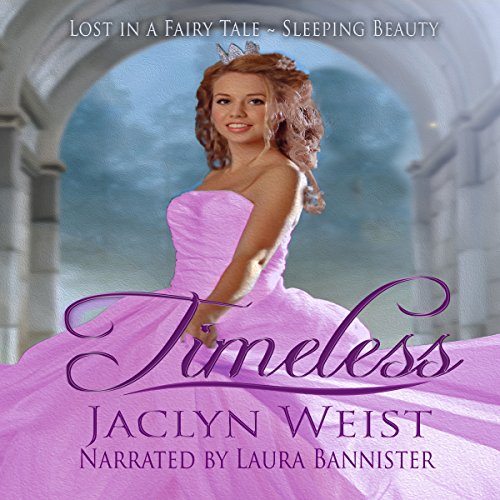 By: Jaclyn Weist
Narrated by: Laura Bannister
Try for £0.00

When Jenny suddenly wakes to find herself being kissed by a strange - but very handsome - prince, she knows that her boring life of folding laundry could be gone forever. Stuck in a medieval land of castles and royalty, Jenny learns that she is being forced to marry the prince, and she is definitely okay with that. She escapes to find out how to return home while trying to keep from falling love with either of the boys vying for her attention.

Princess Genevieve has only known life under her mother's rule. She wants to do more than go to battle or deal with suitors. She wakes to find herself in a new world filled with gadgets, electricity, and moving carriages. She finally has the freedom to be who she wants to be with the family who cares deeply for her and a boy worth any sacrifice. It's more than everything she always wanted.

As Jenny and Genevieve settle into their new lives, they face an unknown evil which threatens everything they care about and makes them face tough questions - like who they are and what they really want their lives to become.

What listeners say about Timeless

The narrator had a nice voice but I would have liked it more if she put more feeling when she voiced the characters. I did not hear the characters anger, confusion, happiness, etc. But other then this she has a good voice.

As for the story, I noticed others liked it more then I did. For me I think this is due to the characters themselves then the plot (which is good) or the world building (which is interesting).

I couldn't relate to Jenny and I found her annoying at times. I didn't feel like she acted mature at times but this could be due to her age.
The other characters (the servants) I found acted in a way that I did not expect. They know that the princess is cruel and when Jenny takes her place they are more then happy to tell her so after knowing her for a few hours. If I was in their shoes I would not say anything in fear that I would get punished. I would think that she was acting odd maybe to the curse or she is testing/playing a game with them. I would have to get to know her for at least a few days before I contimplated telling her that she was a cruel princess.

I would still recommend this book to all since it is a clean read and I wouldn't mind reading/listening to other books by this author.

The story is a Sleeping Beauty story but paranormal. The characters, Jenny and Genevieve, switches places. Jenny is a 21st century teen and Genevieve is a princess in 13th century. They both find their ways in the world they are thrown into. The story is told by each one of the main characters. A good up to date Sleeping Beauty fairy tale. The narrator did an excellent job with the story. I was given this free review copy audiobook at my request and have voluntarily left this review.

And then I woke up!

This is one of the most interesting retelling of Sleeping Beauty that I have come across. In a fascinating twist, there are 2 young ladies involved, Jenny and Genevieve - one a modern teen, the other, a medieval princess. Imagine waking up in a castle, being kissed by a gorgeous guy. He calls you “Highness”; introduces himself as a Prince. What the ...? Now, flip that scene. You are from the 13 Century. You are a princess and wake in a modern day house in Idaho. There are several children running around and they all laugh when you “order” them to serve you. But, it’s the magic that captures your attention. There is a cold box to store food, torches come on with a wave, and carriages that move without horses. All these wonderments aside, what happened?

That’s the story. Find out what happened. It is told from the alternate points of view of Jenny and Genevieve. Lara Bannister does a fantastic job of telling the story, giving unique voice to each character and portraying the movement of the story. One thing that stands out, to me, is Bannister can’t seem to shed her own diction when speaking one word, “thang”!

I wish there was an epilogue. Perhaps Ms. Wrist plans another instalment. It would be nice to know what happens to the girls after the ending and what happened to various other characters. What made the Queen react so strongly to her dreams? The more I think of all the threads left open, the more I believe there must be more! I hope so.

If you enjoy Fantasy, Fairy Tales with a twist, adventure with a touch of romance, this book is for you. In exchange for an honest review, I was given this book at my request.

I absolutely loved this new Sleeping Beauty with an extra twist! I’m young at heart and love Teen/YA fantasy books! This story sucked me in from the beginning and kept me hooked all the way to an unexpected unique conclusion.

Narration was good and brought the story to life.

The story is told in Jenny’s & Princess Genevieve’s POV. They wake up in each other’s shoes and they are from a totally different time! There are castles, knights, carriages, swords, magic, fairies, etc...

Jenny wakes up in a fairy tale and soon realizes that everything looks too real to be a dream. Princess Genevieve wakes up in our modern world trying to boss everyone around and very confused about her surroundings.

It was a delightful tale and one of my favorite variations of Sleeping Beauty! I’m looking forward to reading more books by this talented author!

I really loved this story. The characters were so engaging and witty. The narrator was great also.

Why would a 16-year-old girl wake up call or little siblings presents, tell her twin brother to get a breakfast you’ll be eating it in her room that morning and wear a prom dress to high school? That only happens when a medieval princess wakes up in the place of modern day Jennifer who happens to wake up and yes a medieval castle. When I say the fun and Sue’s it really and Sue’s this book made me laugh I am laughing while writing my review. It was funny and funny and funny did I mention it was funny. For those who remember this is like freaky Friday in big headed baby only the baby was much funnier than its parents. I love Geneva and Jennifer they were both likable they both adapted well Jennifer more than Geneva to the new surroundings I just loved it and you will too if you like time travel books stories or movies you would love this book. Also, I can’t express how awesome the freaking narrator was she was freaking awesome I loved her.

This is book 1 in the Lost In a Fairytale series. If you like fairy tales and time travel stories, I recommend this series. When Jenny and Princess Genevieve are forced to exchange each other’s lives, there is a lot of adjusting to do. This story is action-packed with a healthy dose of romance and intrigue. I thoroughly enjoyed it.

I listened to the audio version and narrator, Laura Bannister, did a wonderful job

GREAT STORY I ABSOLUTELY LOVED IT.
WISH THERE WAS A SAGA LIKE THIS BY THE AUTHOR. WELL WRITTEN AND ACCEPTABLE FOR PEOPLE OF ALL AGES.
I ALREADY WAS GREAT AND EASY TO FOLLOW. PASS IT ALONG TO FRIENDS.

In fairness, it’s slightly above a “Not for me” Rating because it was well written/edited.

I really didn’t care for Genevieve nor Jenny. The time swap didn’t effect nor warp them - their transition to their new realities were too smooth.
It wasn’t climatic and the ending was to be expected from two in love girls for a HEA.

Laura Bannister is an excellent narrator and I would listen to more from her - in a different genre.

Apologies for the delayed review - it’s another audio I’ve had on my shelf for over a year ....

Great book that beautifully blends a classic fairy tale with the story of two very different girls who switch places and eras and have to learn to fit in while avoiding the evil who switched them and finding out why they were switched. The characters are very well written and the storyline is great. The narrator does a very good job with the story.

A WONDERFUL SLEEPY BEAUTY TWIST!
I REALLY ENJOYED HOW A PRINCESS FROM LONG AGO ADJUSTED TO THE CONTEMPORARY WORLD THAT WE.LOVE IN TODAY!
LAURA BANNISTER IS A VERY GOOD NARRATOR! AND BRINGS THE STORY TO LIFE THROUGH HER NARRATION!