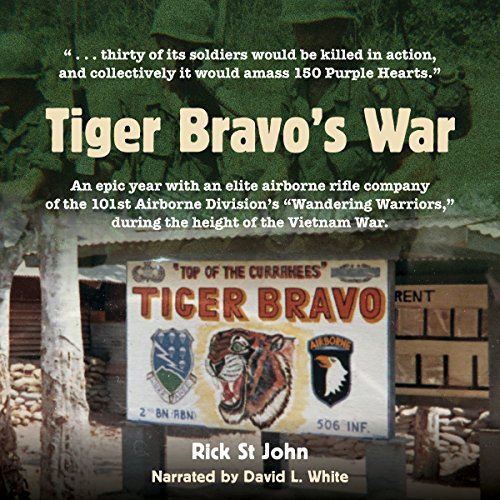 Tiger Bravo’s War follows a band of young paratroopers, from the same battalion in the elite 101st Airborne Division portrayed in Stephen Ambrose’s World War II best seller Band of Brothers, during their first year in combat in the Vietnam War - from a bayonet charge in War Zone D and street fighting during the 1968 Tet Offensive, to a rescue mission of a surrounded platoon and rock and roll in the company mess hall, and much more. 30 of their number would be killed in action, and collectively they would amass a staggering 150 Purple Hearts. It is also about everyday life in a war zone and the strange, often harsh, sometimes beautiful, tropical environment in which the war was fought.

Lastly, it is a soldier’s tale of the young men of Tiger Bravo - the son of a World War II Japanese fighter pilot, who wins a Silver Star fighting as an American infantryman; the tough kid from rural Texas, who leaves a job cleaning astronaut offices in Houston to volunteer to be a paratrooper; the medic, abandoned by his mother, who would find in Tiger Bravo the family he never had; and over a dozen more with their own unique stories.

Vietnam from an Officer's Perspective...

Story: This is what Vietnam looked like to Rick St. John an officer with the 506th Infantry Regiment of the 101st Airborne Division. A hard working line officer during this period of the Vietnam War, he describes what that experience was like for him. He does so from an officer's perspective so you get to learn a little more about the decision making and the bigger picture as they saw it at the time which is quite helpful in understanding this period in American & Vietnamese history.

Performance: A fine performance by David White. A good steady voice with no distractions, except for when he tries to impersonate other people. I really wish all narrators would stop this practice. Unless you are a woman, do not try to impersonate one. Likewise if you are not from the Hill Country of Tennessee, please stop trying to sound like it. He has a fine voice and we can grasp from the context , or more usually, directly from the words spoken, who is speaking; just be yourself. Only highly trained character actors should be attempting multiple personas in one take. But those spots were few and far between and he does an admirable job.

Summary & Overall Score: His accounts give a very detailed and less often seen command perspective of a rifle company, but I still give it a C. The biggest reason for that rating is that there is a little too much "rah rah the Army made the best decisions it could at the time" which we clearly know to be false. I do appreciate that I am better able to understand the decisions, but there is no point in trying to justify some tactical blunders and complete strategic backfires that the Army and Washington made during this period.

This audio book was provided by the author, narrator, or publisher at no cost in exchange for an unbiased review.

Best I have read, or, heard about our time there. Being a member of that unit at that time and place, I can attest to it's accuracy. A must purchase for those that want to know the real story.

This is a captivating memoir of a commander's battlefield experience told by someone who knows how to spin a story. The storyline is clear and concise, as is the voice actor's recitation, his goofy character accents notwithstanding. The author is factual yet modest in recounting the exploits of is company. Excellent "read", highly recommended.

I was provided this free review copy audio book by the author or narrator at my request and have voluntarily left this review. This review is for the audio copy of: Tiger Bravo's War by Rick St. John and narrated by David L. White. This was a very well told history lesson on the Vietnam War. It was told by a person who experienced it and about the unit he served in. I enjoyed it very much because this described an elite unit and how they endured a very different type of warfare and the subsequent aftermath of that war. This was my generation’s Band of Brothers. The narration was perfect for the story. I recommend this book for anyone interested in Vietnam War history.

I was enthralled by this history of one year of the Vietnam War. I was born in August 1968, so I have no first-hand knowledge of the Vietnam War, my parents never spoke of it, and it was never covered in school. My knowledge came from movies like Platoon that I watched when I was in college. So, I was interested to hear more about the war and personal accounts of people who fought in it. I was completely horrified by the tale, by the death and the high toll the war cost in lives, but I was proud of the bravery and persistence of the, mostly young, American soldiers. I think everyone should listen to. this story, especially younger, more entitled generations, so they can learn about the efforts and sacrifices of these brave men. I was at once proud of the soldiers and at the same time ashamed of the way they were treated upon their return home. Whether we agree with wars or not, we should never focus our personal opinions on the soldiers doing their jobs.

The narration was excellent. The variety of voices provided was great. Personally, I feel the very stoic, unemotional presentation highlighted the horrors of the war, especially one particular passage that describes a number of deaths in very graphic detail. It made it more real because it was not sensationalized and overly emotive.

That said, if you are overly emotional regarding death and the stark realism of war (for instance if you can't bear the opening scene of the movie Saving Private Ryan), this is probably not the book/audiobook for you.