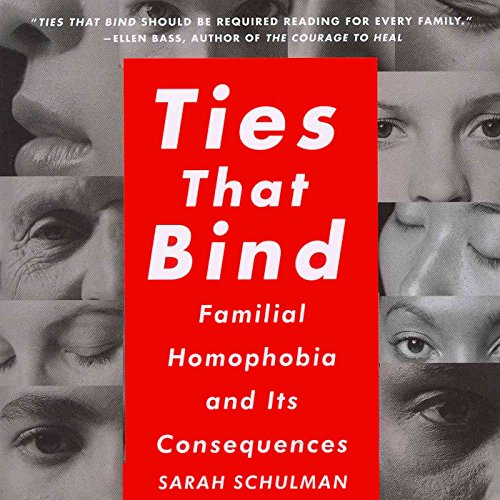 Although acceptance of difference is on the rise in America, it's the rare gay or lesbian person who has not been demeaned because of his or her sexual orientation, and this experience usually starts at home, among family members.

Whether they are excluded from family love and approval, expected to accept second-class status for life, ignored by mainstream arts and entertainment, or abandoned when intervention would make all the difference, gay people are routinely subjected to forms of psychological and physical abuse unknown to many straight Americans.

"Familial homophobia," as prizewinning writer and professor Sarah Schulman calls it, is a phenomenon that until now has not had a name but that is very much a part of life for the LGBT community. In the same way that Susan Brownmiller's Against Our Will transformed our understanding of rape by moving the stigma from the victim to the perpetrator, Schulman's Ties That Bind calls on us to recognize familial homophobia. She invites us to understand it not as a personal problem but a widespread cultural crisis. She challenges us to take up our responsibilities to intervene without violating families, community, and the state. With devastating examples, Schulman clarifies how abusive treatment of homosexuals at home enables abusive treatment of homosexuals in other relationships as well as in society at large.

Ambitious, original, and deeply important, Schulman's book draws on her own experiences, her research, and her activism to probe this complex issue - still very much with us at the start of the twenty-first century - and to articulate a vision for a more accepting world.

What listeners say about Ties That Bind

I enjoyed this book. The author makes some excellent points and invites you to think it through with her. However, the author uses plenty examples from her life, which confused me at times: do I choose to agree with the author out of compassion or was a logical well-formed argument?

very to the point and understandable.

this was informative and the elephant in a gay persons room. intuitive for those who chose not to study life.

An amazing book and worth several readings. I would recommend to anyone whether gay or straight.