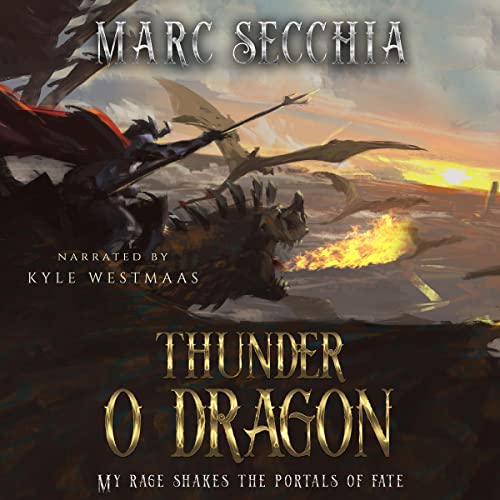 By: Marc Secchia
Narrated by: Kyle Westmaas
Try for £0.00

Thunder o Dragon. My rage shakes the portals of fate!

From flying to war to becoming a living playground for 30 children, a dragon called Dragon is growing in all sorts of unexpected ways these days. Never mind. With his signature wit and inimitable style, and the expedient of occasionally throwing his beautiful black Princess, Dragon Rider and best friend straight at his troubles, this Dragon is prepared to seize his war-torn world by the scruff of the neck and shake it into shape. It's not as if the world has a choice in the matter.

The third hilarious, climactic volume in Dragon Fires Rising sees an unlikely Dragon-Rider team take on the full might of the invading Skartunese army.

Final book in a massively entertaining series. Full of laughs and love. Highly recommend this for any lovers of dragon literature.

Great Finish, if A Little Hasty

Like the two that came before it, Thunder O Dragon is witty, emotional, full of excellent world building and real life relationships, and more shenanigans from the Princess and her Dragon. My only issue with it is the end to the big climax is weirdly hasty and no one explains how Dragon knows to call someone's bluff (leading to the immediate resolution of a plotline). Other than that, phenomenal story.