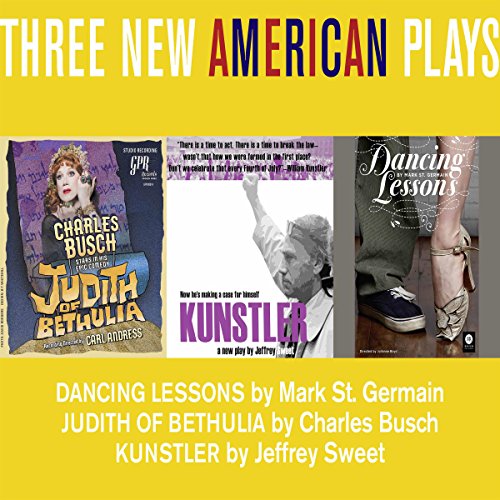 Here are three new American plays written by the brightest names working in the theater today.

Dancing Lessons centers on Ever, a young man with Asperger's syndrome who seeks the instruction of a Broadway dancer to learn enough dancing to survive an awards dinner. The dancer, Senga, however, is recovering from an injury that may stop her dancing career permanently. As their relationship unfolds, they're both caught off-guard by the discoveries - both hilarious and heartwarming - that they make about each other and about themselves.

Judith of Bethulia, written by and starring Broadway legend Charles Busch, is the world premiere of his new play which is an outrageous and bawdy celebration of the Hollywood biblical epic genre! Lepers, whores, eunuchs, centurions, evil generals, youthful poets, and a beautiful redheaded widow make Charles Busch's comedy a story worth praying for.

The world premiere recording of Jeffrey Sweet's Kunstler brings to life William Moses Kunstler who journeyed from comfortable suburban lawyer to America's most revered and reviled attorney for the civil rights and radical movements of the last half of the 20th century.