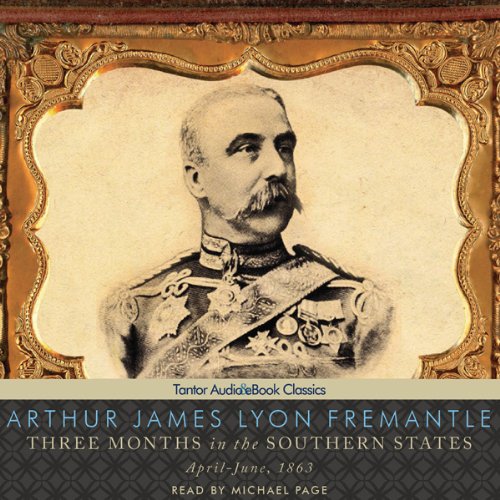 Three Months in the Southern States

The author of this book, Arthur James Lyon Fremantle, has, perhaps, achieved more renown in recent years than at any time since the publication of his literary efforts. Those familiar with the film Gettysburg will recall the unusual figure of a British Guards officer attired (inaccurately) in his full dress Guardsman's scarlet uniform among the ranks of the Virginians at the famous and pivotal battle. The cinema may have taken its usual liberties, but the character was firmly based in fact and was none other than the Fremantle himself. The British Empire felt no need to come down strongly on either side of the conflict between the States, but its support for the Confederacy was both implicit and occasionally obvious. Fremantle wanted to see the war at first hand and so he traveled to America and accompanied the Confederate forces-actually unglamorously in mufti-in the field. His experiences brought him to the collision of Gettysburg, and history is indebted to Fremantle for the observations of a comparatively impartial military man on these monumental times and events.

What listeners say about Three Months in the Southern States

A well narrated account of a British Officers experiences during a turbulent time in American history.Of the dangers he faced,the friendships he made and his conversations and descriptions of some very important figures in American history at that time culminating in a battle that probably decided the entire war.

If you could sum up Three Months in the Southern States in three words, what would they be?

What was one of the most memorable moments of Three Months in the Southern States?

The memorable characters in Texas.

I have long been familiar with the memoirs of Arthur Fremantle of his time observing the Confederate army in 1863. I have used various parts for research, but had not read the whole thing, so when I ran across this audio version, I jumped on it and wasn’t disappointed.

The narration by Michael Page is smooth and clean; British accent, but quite easily understood by American listeners.
The Fremantle diary is most commonly referenced for the Gettysburg portion, but that is only a scant part of the narrative. I many ways the most interesting and vivid parts come earlier in the book. Fremantle’s entry into the Confederate States of America through Texas and his observations of matters with its border with Mexico are fascinating. The author’s talent for understatement provides a great amount of amusement along with the detailed description of the state of affairs in that remote corner of the newly founded country.

To have just shown up unannounced with little more to speak for him than his pedigree in the British army, Fremantle manages to witness several events of great historical significance and meet many notables in both the South and the north. Like most British, Fremantle was avidly anti-slavery, but like many Europeans who found themselves in the South, he quickly decided that the situation was not nearly as two-dimensional as he was led to believe. His observations are startling.

“Three Months in the Southern States” is a valuable resource and an eye-opening read. Page’s wonderful narration makes the visualization all the more powerful.

fantastic 1st hand account of the state of dixie and het people during their war for independence! I recommend it!