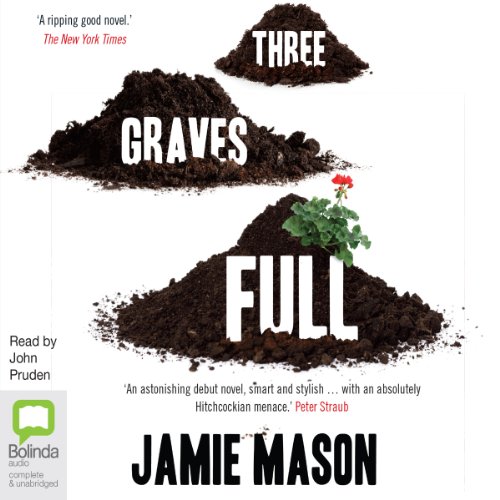 For fans of the Coen brothers' films or for those who just love their thrillers with a dash of sharp humor? An engaging and offbeat story about a man driven to murder, who then buries the body in his backyard only to discover that there are two other shallow graves on his property.

There is very little peace for a man with a body buried in his backyard.

But it could always be worse...

More than a year ago, mild-mannered Jason Getty killed a man he wished he’d never met. Then he planted the problem a little too close to home. But just as he’s learning to live with the undeniable reality of what he’s done, police unearth two bodies on his property - neither of which is the one Jason buried.

Jason races to stay ahead of the consequences of his crime, and while chaos reigns on his lawn, his sanity unravels, snagged on the agendas of a colorful cast of strangers. A jilted woman searches for her lost fiancé, a fringe dweller runs from a past that’s quickly gaining on him, and a couple of earnest local detectives piece clues together with the help of a volunteer police dog - all in the shadow of a dead man who had it coming. As the action unfolds, each character discovers that knowing more than one side of the story doesn't necessarily rule out a deadly margin of error.

Jamie Mason’s irrepressible debut is a macabre, darkly humorous tale with the thoughtful beauty of a literary novel, the tense pacing of a thriller, and a clever twist of suspense.

"Mason strides confidently into Coen brothers territory with her highly entertaining, solidly plotted debut about loneliness and the need for companionship... With sly wit Mason tweaks genre cliches while respecting crime fiction tenets." ( Publishers Weekly)
"Racheting up suspense is one thing, and Mason manages it masterfully, particularly as it concerns Getty's fate. But portraying characters so well and so thoroughly, examining and explaining their motives even for murder, requires a level of skill that is rare, marking this as an astonishingly accomplished debut and Mason as a writer to watch very closely." ( Booklist)
"Mason's quirky debut novel deftly weaves dark humor into a plot that's as complicated as a jigsaw puzzle but more fun to put together... Mason's written a dandy of a first outing with not a single boring moment." ( Kirkus Reviews)

A Farce of Unforeseen Circumstances

This really is a quirky book. If you’re looking for something just a bit different this might well be it. It develops as a crime thriller with many of the characteristics of a theatrical farce. In fact you can throw in a little bit of Lassie while you are at it. There is a lead character who is utterly unimpressive apart from the straits he lands himself in. A humorous pair of cliché cops on his tail and a good old redneck semi-villain on a collision course with just about everyone. They all think they are right in their own ways, but probably aren’t of course.

I have to say well done to the publisher for not trying to make out that a book with some elements of humour in it is “hilarious” or “laugh a minute”, I’m very tired of that! “Darkly humorous” as they have it is just about right. Scenes such as the night when Jason comes up with his new plan are funny as you picture them in your mind. The story does resort from then on to pretty much theatrical farce with characters getting drawn into the melee in ways that are totally unexpected to them. Even the police dog is a character in her own right and from that point on I think the book gathers momentum towards its highly satisfying conclusion. The narration by John Pruden is very good and helps maintain the pace of the tale.

So this will be a hit for some and a miss for others but if you can imagine the action as it unfurls you may well just laugh at how the characters end up in some of the macabre situations that they contrive between them. I can’t recommend this with huge confidence. Amazon reviews plainly state that some people really did not get on with it and maybe a little editing here and there would have improved its overall reception.

That said, given the “Good Read Guarantee” you can always give it a try and return it if you aren’t keen. This is one of the huge benefits of Audible. For those of us that take to it and are happy to work with it there is a genuine story here with enough dark humour and suspense to make it more than satisfying.