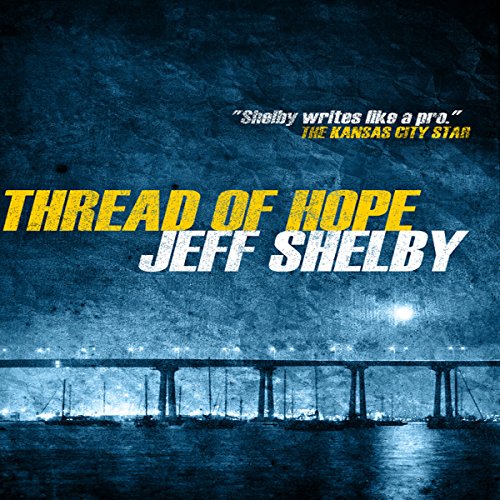 By: Jeff Shelby
Narrated by: Chris Andrew Ciulla
Try for £0.00

Seven years after Joe Tyler's daughter Elizabeth was abducted, he hasn't stopped looking for answers, and he hasn't forgotten the friend who stood by him as he lost his wife, his home, and his career in his search. Now he's been brought back to San Diego by the news that this friend has been arrested for beating up a teenage girl - a girl not much older than Elizabeth would be now.

Joe is convinced Chuck Winslow is innocent, but Chuck is in a coma and can't explain what happened. And the more Joe hears about what Chuck's been up to in the years he's been gone, the less Joe recognizes his old friend. To find out the truth, he will have to face his ex-wife, his former bosses, and a hometown full of wealth, lies, and illicit privilege. When Chuck's accuser goes missing, Joe must decide where his loyalties truly lie.

What listeners say about Thread of Hope

Good story and great narration. Really wish the other books in this series were available on audible.

This book begins with Joe Tyler returning to a San Diego, a place he never wanted to see again. He's an ex police officer who is now a private investigator who specializes in finding missing children. He chose to quit the police force when his own daughter was abducted eight years ago. At first he drank himself in to a stupor and finally realized that wasn't going to get his daughter back.
Now his best fried is in the hospital, in a coma and accused of beating up a girl in high school, that girl is missing. Did she leave on her own or was she abducted? The conflicting stories about her home life aren't helping either.
The secrets and scandals (like teenage prostitution) he uncovers could ruin the lives of many, mostly wealthy members in the community.
And in the background Joe is still looking for his own daughter. She would be 16 years old now...
Chris Andrew Ciulla does an excellent job narrating.
I HIGHLY RECOMMEND this book.
If you found this review helpful please indicate so.

Book 1 in the Joe Tyler series by Jeff Shelby

Joe Tyler was a police detective on Coronado Island (just off the San Diego, CA coast) when his 6 year old daughter who he was supposed to be watching was kidnapped from their front yard. He blames himself although his attorney wife does not blame him. He searched for her unsuccessfully for several years as his marriage fell apart. Now, eight years after the kidnapping, he is a private investigator who searches for lost children. He has never failed to find a child except for his daughter Elizabeth. He continues to search. 40 year old Joe learns from his wife who continues to live in their old house on Coronado that Chuck Winslow his best friend since high school has been beaten up and left for dead and is now in the hospital in a coma. Chuck also stands accused by an eighteen year old high school senior of beating her up. Joe Tyler does not believe his friend would ever do such a thing. Then the girl who accused Chuck is missing. This paragraph merely sets up the novel and gives away none of the plot.

Thread of Hope is a solid 5 star suspense mystery. This is only the second audio book I have heard Chris Andrew Ciulla narrate (the other is Illegal a legal thriller by Paul Levine). His narration is first rate.

Now for the bad news: The Joe Tyler series now includes eight novels with Books 2 through 8 being available only in ebook (Kindle) format. I hope the author or Audible will make the most recent 7 novels in the series available in audio. I could tell you if/when Joe finds his daughter Elizabeth and whether she is dead or alive, but I will not.

Joe Tyler, a private investigator is on a mission, a mission to find missing and abducted children. Something this former police officer couldn’t do for his own daughter, who went missing 7 years ago. Unable to move past the tragedy, it ultimately destroyed his marriage and law enforcement career.

The brutal beating of his best friend brings him back to his hometown, on a quest to find out what happened. The subsequent disappearance of the teenage girl at the center of the investigation dredges up the emotional memories from the still open wounds surrounding his own daughter's disappearance.

All I can say is wow! I’m a happy camper right now, I just finished listening to a wonderful mystery, I kept adding suspects to my list, then cross them off, only to add them back on again! And I was left guessing to the very end.

Thread of Hope is also the emotional story of a broken man, a natural protector, who, in the end, couldn’t protect the one person that meant the most to him. This story was absolutely heartbreaking in some passages and the author conveyed the emotions eloquently.

This book has plenty of action, adventure, and drama. And the story moves at a pretty quick pace.

Chris Andrew Ciulla narrates this 8-hour audiobook and does a fantastic job on this fully voiced production. I’m always happy when a narrator nails voicing characters of the opposite sex and Chris does it better than most, all his characters sound natural and the emotion he added to the reading was moving. Thread of Hope was an enjoyable listen and ended much too soon.

Jeff Shelby has written several books in the Joe Tyler series and I hope more of his books make it to audio and that Chris Ciulla narrates each one. Count me in!

This audiobook was gifted to me exchange for an unbiased review!

I, personally, love series books. It allows me to get to know the characters and learn what makes them tick. This is one such type of book. It ends on a good note, but left me wanting to know a little more about his search for his daughter. This first book of the series, Jeff Shelby drew me in from the very first sentence and held me there. The story is fast-paced and exciting and the characters are believable. Throughout this story, he took me right along with him as he worked out the whys and why nots on who was responsible for the issues at hand. Before the story ended, I was already searching to see if there was a book 2, and I will definitely be getting it.
I listened to the audio book and Chris Ciulla does a fantastic job in the narration. His ability to keep the story moving is not one that every audio book narrator has. I enjoyed the timber of his voice, and the pace of his reading. He does a very good job of keeping character's voices separate and recognizable.
All in all, I would recommend this book to my friends.

Joe Tyler is an ex San Diego detective who specializes in finding missing children. He quit the police force and his marriage 7 years earlier when his young daughter was abducted. When his best friend is accused of beating up a teenage girl, he is drawn back to his hometown where he lost his daughter.

Somewhat like a Jack Reacher, Tyler wanders around the country doing what he failed to do for his own family, helping parents find their lost children. And like Reacher he is deadly with his hands, doesn’t mince words and is the best at what he does.

I enjoyed this listen. Characters are developed enough to capture the listener’s interest .... and sympathy where needed. The story has lots of action, drama and suspense/mystery, which move the storyline at a fairly fast pace. The publisher’s summary gives a good synopsis.

When Joe learns his best friend, Chuck, is in a coma after a brutal beating, Joe returns to his hometown. Even though Chuck is in a coma, he is under arrest. He is accused of beating up a high school girl. Joe doesn’t believe it. As the story unwinds, Joe uncovers secrets and lies that could ruin the lives of town’s wealthiest members.

I am not at all sure why it is receiving five stars from a few other reviewer’s. It is most assuredly not a five star book but it’s certainly worth a credit and I gave it four stars across-the-board which I believe is an more accurate reflection of the book.

This book was written in 2011 so even though it says it is a series , you won’t find anything since then on Audible. The follow up books are available on Amazon. Just a warning because I find this kind of frustrating. Anyway ... Give it a try!

This book kept me on the edge of my chair and couldn't put it down. Teenage prostitution? Omg I couldn't believe it and the end open for book two I am so ready for it. Do not pass this one up worth every minute of your time. I received this free for an honest review from the author or narrator.

This book was well written I felt as I was right there with the detectives, searching for the murderer. Very captivating.

not hard to finish, clearly written. will read the rat of his books in best order.