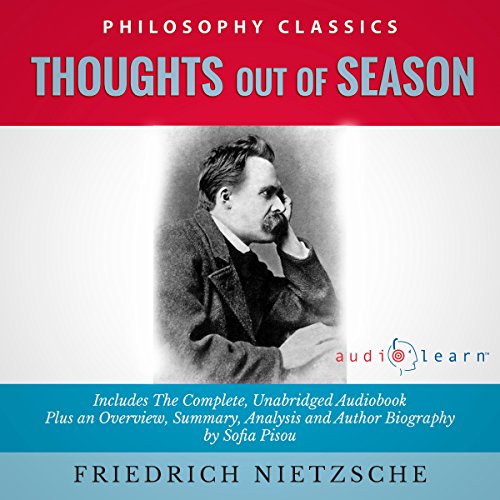 Thoughts Out of Season by Friedrich Nietzsche - The Complete Work Plus an Overview, Summary, Analysis and Author Biography

By: Sofia Pisou,Friedrich Nietzsche
Narrated by: Doug James
Try for £0.00

Thoughts Out of Season is a collection of paramount importance consisting of four notable essays written between 1873 and 1876. All four essays review 19th-century German culture in an incisive and acute manner. It is a work of acerbic criticism toward contemporary pseudoscholars who Nietzsche calls Philistines and towards the blatant abuse of history. At the same time it constitutes an encomium to Wagner's ingenious artistic and creative nature and to Schopenhauer's unique perspective of the cosmos. A fifth essay was also written as a meditation to the discipline of philology, yet it was not published.

This summary includes a biography, a review of every chapter of each essay, and ample explanation of the social and historical background. It is a must-hear synopsis and analysis of this substantial work of Nietzsche, imperative for all students of philosophy or all those who want to familiarize themselves with the magnificent spirit of that great philosopher of the 19th century.
©2015 AudioLearn (P)2015 AudioLearn
Philosophy
Show More Show Less

What listeners say about Thoughts Out of Season by Friedrich Nietzsche - The Complete Work Plus an Overview, Summary, Analysis and Author Biography