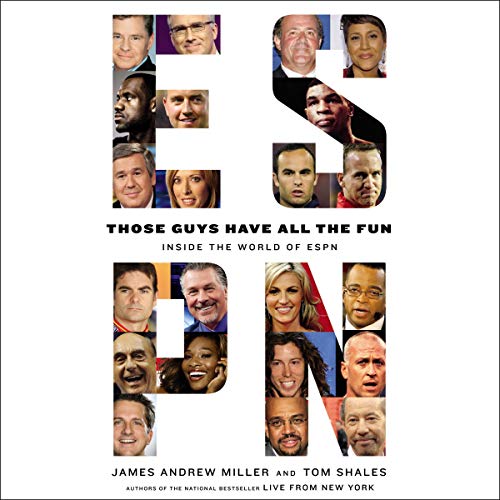 Those Guys Have All the Fun

Chris Berman, Robin Roberts, Keith Olbermann, Hannah Storm, Bill Simmons, Tony Kornheiser, Stuart Scott, Erin Andrews, Mike Ditka, Bob Knight, and scores of others speak openly about the games, shows, scandals, gambling addictions, bitter rivalries, and sudden suspensions that make up the network's soaring and stormy history. The result is a wild, smart, effervescent story of triumph, genius, ego, and the rise of an empire unlike any television had ever seen.

What listeners say about Those Guys Have All the Fun

Great story - on business and entertainment

A no holds barred view of life in ESPN. Great for understanding the birth of a business and learning about strategy.

As a bonus you learn about the fascinating personalities behind the scenes of the worldwide leader.

All well told with beautiful on the ears narration. Highly recommended.

A Compelling Story Made Less So by the Narration

While the narrator who covered the male contributors did a fine job, the gentleman who framed the segments sounded mush-mouthed and hurried. More, the female narrator was far too dramatic in relation to the content of the book. Her breathless and over-emotional reading seemed cut from a different book.

Overall, I really liked this listen and found it to be very insightful. Loved hearing about the behind the scenes stuff but then again, I thought the book jumped around too much and I didn't care for the narrators either. At the very least, they could have just gotten the ESPN personalities to read their own quotes. That would have made this book much much better.

The female narrator almost ruined all the parts of the book she performed, as she was WAY too emotional and made some amazing women sound like complete ditzes with her deep sighs and ridiculous emphasis. In fact, it seemed like she changed the meaning of some statements you can't imagine meaning what they sounded like with her performance. I have no idea if she was directed to be that way or if she's that terrible, but either way, it was a fail that negatively impacts the listening experience greatly.

Not a lot of information

As "inside stories" go, this is trailing the pack. I suppose it is a nice thing to have all of one's suspicions about the disfunctionality of the world wide leader affirmed with out of context quotes and anecdotes, but this book could have been ten times the "expose" it claims to be. Disappointing.

You wish this was SportsCenter!

I love reading/listening to books which present real points of view from the people who lived the events. However, there are two MAJOR issues with this audiobook.
The first is the editing of the actual book. There are almost no introductions to the change of topics! One minute it's women sideline reporters, then it's about the drama of sportscenter with Olberman and Patrcik with no warning. I had to listen to the book twice in most sections just because I thought I missed something, I didn't. There are times when quotes are just thrown in because the author didn't want to waste material. It made NO sense.
The second major issue is Joan Baker. This reader sucks. I am blind I've listened to more audiobooks than they have on audible. This is the second worst reader I've ever forced myself to endure. Her breathy, over empathetic and miss-timed voice representations make the women who were quoted in this book seem like...like....the producer should have said stop trying to be a oral porn star and read the f'n book.
Buy the written version if you can read print. If you can't, pray another version of this audiobook comes out soon. Otherwise try not choke on your own vomit when Joan gets to read (it's not personal, it's business) it really sucked.

The narration suffered from stiff timing and over pronunciation. The female narrator was the most trying of the bunch but they were all poor.

If you could play editor, what scene or scenes would you have cut from Those Guys Have All the Fun?

Too much time spent on the business side and not enough on the on-air or even production staff. I really was looking forward to this and the whole execution of the idea left me more glad to be done with it. Several times I wanted to abandon it but plowed ahead anyways in some masochistic stupor

Good story. Tough to listen to.

Interesting story horribly narrated. Two of the narrators should never do audiobooks. Can't even get the pronunciation of ESPN employees' names (Golic and Bilas) correct. Note to authors: Hire professional narrators. It's worth the extra money.

An American success story warts and all

Yes, very detailed and certainly some parts (the NBA section for me) were a bit too much detail but...'growing up' with ESPN since it's inception (watching on TVs at college!) it brought back memories and thoughts about this 'wild idea' that took hold all those years ago.
It might have been nice to have different voices for the different 'characters' but it didn't detract too much from the experience.
Highly recommended for any fan of sports and/or for folks wanting to study business trials and tribulations of making an idea into a reality and then a dominant force.

Was hoping for drama, sex , corruption and lies. You get nothing but bullshit, gossip and pats on the back about how great we are at ESPN. Not worth it at all unless you are a total fan boy of everything ESPN.

Many great stories - possibly too many

This book excels at providing the early history of ESPN. The early part is a fantastic business book with great stories of the people, events, and circumstances that laid the groundwork for what is the modern day ESPN.

The remainder of the book is a set of hit & miss stories that I wish had been edited down to just the hits.

Overall, if you are an American sports fan of the last 40 years, you will no doubt enjoy the book. There will just be moments you enjoys less than others.