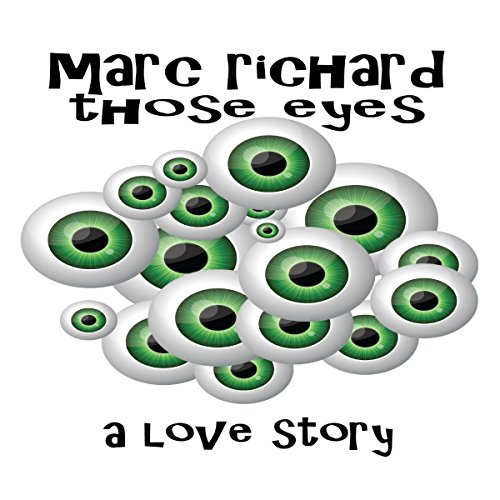 Those Eyes: A Metaphysical Comedy

Reincarnation. It ain't for dummies.

Ronnie and Helen. Two teenagers in love with marriage on the horizon. Till an accident cuts his life short.

The Archangels make sure his soul gets into a new body.

But they screw up.

Those Eyes is a surrealist romantic comedy originally penned by a group of Benedictine monks in a trailer at a maple syrup protest rally. The manuscript went through several revisions, and even one book burning demonstration, and is now nothing like the original text. It has been translated into one language: This one. It’s packed with extra comedy, a whole lot of love, a splash of the ghastly, and more than a touch of the bizarre.

Give it a listen and discover just how weird love can be.

What listeners say about Those Eyes: A Metaphysical Comedy

Loved the idea of this. Great narration would definitely recommend if you want something light.

Funny, random, engaging, and worth listening to

This book is unique and there are few others I can compare it to. It starts out in a way that forces you to either love it or hate it, so I suggest you listen to a sample to determine which category you will fall into. But since the first five minutes caused me to giggle snort my soda out my nose a few times and laugh out loud other times with its clever and surprising use of appropriate profanity, I fell in love. One line of the first chapter sticks with me, as I paraphrase - This book will have you standing in the middle of your living room with your head in one hand and a head of cabbage in the other hand, saying WTF. And I should mention now that I was given this free review copy audio book at my request and have voluntarily left this review.

Yes, that kind of randomness and unexpected visual cracked me up. But very quickly, that intro passes and we are thrust into a charming story of a boy in love and how his life is altered when his soul is checked around by the powers that be as he searches for his One True Love. It's a finely crafted story by Marc Richard who reminds me of a Gold Medal Olympic figure skater pretending to be drunk on the ice -- in order to seem drunk while ice skating you have to be THAT GOOD not to fall on your face. Make sense? This guy is that good.

Meanwhile, narrator David S. Dear navigates the story in a way that had me forgetting David wasn't the author. In other words, he read with such panache and ease, the words seemed to be his own. Why can't all readers be so smooth an natural?

If you're tired of formula books where this happens, then that happens, then you know what's going to happen next, just stop! Try Those Eyes and hear the difference when a really masterful writer gets inside your head. You'll be laughing and smiling all along the ride.

Highly recommended for a fun, original, unpredictable story of life, love and why we sometimes feel like chess pieces on a giant board the size of planet earth.

What happens if you're true love is no longer there, but a baby is? It is not as bad as it sounds, just another bit of silliness. Enjoy!
All of Marc Richard's books have an oddness to them that, if one is so inclined to the odd, is easy to appreciate, simply for the out there way he comes up with the tales. The narrator, David S. Dear, does a great job in keeping up the tongue-in-cheek absurdity of it all.

Satirical view of God and reincarnation

This book is a satirical view about God and reincarnation. I would not recommend it to diehard believers since they may find it irreverent, but as an atheist I did not mind this at all. It was quite hilarious, in fact. The book is based on the principle that reincarnation is something real, and the only way to create new lives (or to transfer them). The book basically tells the story of a young couple in the 50's, in which he dies but reincarnates on a young boy who all his life feels something missing. It is the sad story of two predestined souls who never meet at the right time, but which are nevertheless still waiting for each other.

Be prepared for a totally different book. The story is told in a funny and quirky way, with lots of cutaways and random comments. It is clear that this book is written by a man, by the gruesome way in which the deliver scene is described. I found it a bit too much.

The characters are well developed and I was able to relate to them, but in a way I felt cheated, since we expect them to meet at some point in life but we have just to conform ourselves with the hope that maybe one day they will meet, despite all the efforts made by Josh and Steve (Richard's version of God). I had the impression of a long build up just to have it deflated at the end.

In a way, this book is like life itself, in which nothing goes according to plan, and we have to make do with what we get; and even if something feels that must happen, there is never the security that it will.

David S. Dear's cheeky narration was the perfect for this book. His compelling tone kept me interested through the cutaways which threatened to get me distracted. His characters' interpretations were quite vivid and voices were distinctive enough to identify them. Dear's voice is clear and the audio production was quite good. There were just some little noises towards the end of the book. For the rest it was a five star narration.

Despite the strangeness of this book, I really enjoyed it, but be aware that it is not a story for everyone. But those who get this book will have a lot of fun.

It really is a bizarre book:)

Would you try another book from Marc Richard and/or David S. Dear?

Yes, I would - as this one had me a little bit confused:) It really is a bizarre story, and I have to admit I would probably like it better if I read it, not listen to it... I think the structure of the book works better on paper, with all those "cut-in scenes" which, when you listen, don't make much sense or feel unconnected to the plot at all... I also think the kind of humour used here works better on paper, at least it does for me - it's a little too crude for my taste, and while I don't mind it so much when written down, I really don't like it said out loud as it comes out too vulgar sometimes... and it did feel a little too forced in the audio version... Still, if you like that "in the face" kind of humor, you'll definitely like the book, but if you prefer something more subtle, you may have confused feelings about the story, just like me:)

I would probably leave out some of the scenes that were put here and there, right in the middle of the main plot, like some of the conversations between Steve and Josh or the scene with Freddie meeting Death... I felt they were completely unnecessary and did not really develop on the whole idea of the "god-administrators" of the souls... The concept had already been established and those scenes just intruded in the hunt for Helen...:) But again, they probably work better when you read the story, not listen to it...:)

Which character – as performed by David S. Dear – was your favorite?

I liked the main character - he felt right, real and deep. Generally I liked the performance by Mr Dear; there was some acting done by him, but generally he did not really try to make much difference between the voices of particular characters, still being able to make it clear who was talking to whom and what emotions they felt.

Was Those Eyes worth the listening time?

On the whole, yes. It was a strange listen, at times even difficult because of the book's structure, hard to be convincingly conveyed into an audio form; but it did finally leave me with a nice feeling of completion and warmth towards Freddie and Kate, so yes, give the book a chance:)

If you are in the mood for different...

I can't tell you how many times I rolled my eyes while listening to this book. I never stopped listening though!

This book started off on a quirky note and I was never quite sure what I was listening to. It was intriguing enough and a couple of times, while I was in the middle of rolling my eyes, I almost did a spittake. There was some mirth and some snark and some dream sequences and some ethereal shenanigans and it all combined to keep me entertained enough to finish the listen.

I suppose it was a love story, like the title says, but, well, it was and it wasn't. It didn't even have an HEA. Well, it sorta did, but it didn't. (I know that doesn't help but this was just that kind of book.)

I loved the narrator. There was a lightness to the listen that was carried through in the narration. David Dear was probably more of the reason I kept listening. It was hard to follow the surreality of the story at times but his vocals were engaging and entertaining.

This is not your run of the mill listen but if you are in the mood for different, this book will deliver.

Odd but ended up being ok

The beginning of this book was so weird I almost stopped listening to it. Not because it comes across as insulting (which it does) but more like it was written by someone who was on drugs at the time. The style in the beginning is odd and some of the writing seemed random and hard to connect to the story. It got better as it progressed.

Was Those Eyes worth the listening time?

It was just so-so. There were some funny parts and some interesting points but it could have been a lot better.