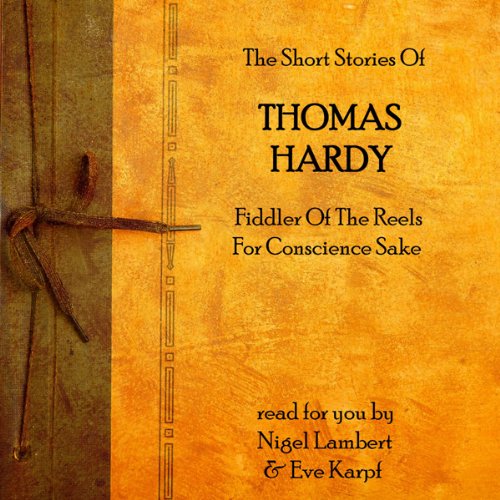 By: Thomas Hardy
Narrated by: Nigel Lambert,Eve Karpf
Try for £0.00

Thomas Hardy is one of the great English novelists, but he also wrote more than 50 short stories, originally published in various periodicals and then assembled into four volumes. He was modest about all his work and particularly about his stories, but his strong sense of imagery is the ideal background for his compelling and sometimes fantastic tales.

We begin with one of Hardy’s best regarded stories, 'The Fiddler of the Reels'. Here Hardy exposes a supernatural and demonic theme, against a realistic and historical background of the Great Exhibition of 1851 and the first trains. A typical Wessex girl is gripped by the power of music and dance when a lone fiddler casts his spell on her, causing her cloying but plain suitor to leave suddenly for London.

Hardy’s recurring theme of loveless marriage is brought up again in our second story, 'For Conscience Sake', with the title relaying his opinion in no uncertain terms. Mr Milborne thinks back to his youth in Wessex with guilt as he remembers his broken promise of marriage. To relive his heavy conscience, he decides to venture back west and honour his 20-year commitment, turning Leonora Frankland’s life upside down once again.

These stories are read for you by RADA trained Nigel Lambert, a member of the National Theatre who has made numerous appearances for the BBC in fields as varied as classic drama and children’s television, and Eve Karpf, who trained at Bristol Old Vic Theatre School. She is widely experienced both as a reader of audiobooks and as a BBC radio actress.

What listeners say about Thomas Hardy

Would you try another book written by Thomas Hardy or narrated by Nigel Lambert and Eve Karpf ?

Written by Thomas Hardy: yes. I've read or listened to most of his prose and poetry, and am happy to read it again - some of it several times!
Narrated by Lambert and/or Karp: yes, but only if it was a book I wanted to read. They are both good narrators but when it comes down to it who reads a book is secondary to the book itself.

The Fiddler of the Reels
Hardy's humour. His ear for dialogue. His love of music. The setting of the story at a crucial time in British history, when the railway is accelerating great social changes.
For Conscience' Sake
Hardy's humanity, displayed here by his showing up the unkindness - and idiocy - of the Victorians' obsession with trying to force people to submit to rigid Christian standards of behaviour heedless of how much misery may result, how many potentially happy and useful lives wasted.

The description in The Fiddler of the Reels of the climactic five-handed reel in the inn, a bewitching, exhausting dance that Hardy must have seen (and accompanied on his fiddle) many times over as a youth..

Do you think Thomas Hardy needs a follow-up book? Why or why not?

No. Hardy has been dead for 90 years, so unless there are any undiscovered sequels among his papers there can be no follow up to these stories. Anyway, they are complete in themselves.