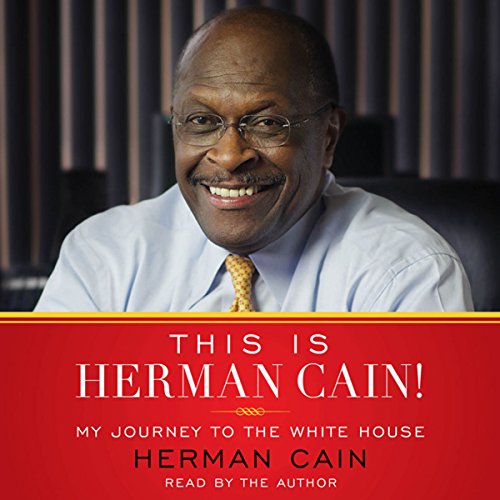 This Is Herman Cain!

Herman Cain’s candidacy is outpacing such high profile candidates as Newt Gingrich, Michele Bachmann, Ron Paul, and Tim Pawlenty in growth and support, registering third in overall popularity among Republican voters in a recent Gallup poll. In this memoir, Cain answers his most often-asked question: Who is Herman Cain?

Growing up poor in the segregated south, Cain describes how he pulled himself out of the depths of poverty and became successful. Through college, a stint as a Navy mathematician, working at Pillsbury and becoming its youngest ever vice president, and eventually serving as CEO of Godfather’s Pizza, Herman Cain relied on self-motivation and determination to get where he is today. His strong beliefs and values have aided him in his career and personal life, and he reveals his self-made secrets in My Name Is Herman Cain! Motivated by his children and grandchildren, and his many supporters, Cain announced his candidacy in May 2011, and the nation watches as he joins the growing number of Republicans duking it out for their party's nomination in 2012.

What listeners say about This Is Herman Cain!

Great story and inspiration hidden behind the political story

The book includes a great deal of politics, particularly towards the end of the book.
However, the first half of the book is excellent and shows how hard work and ambition allowed Herman to rise through the ranks of the business world.
Overall a good book, but if it listen again I'll stop once it gets to the political part.

This is just warmed over self-indulgence. I don't doubt that Cain transported himself from poverty to a captain of industry, but this book does not do his migration justice. I't;'s full of anecdotes that he thinks are funny or worth repeating as lessons. I found them boring. And Cain laughing over his own humor or insights do NOT make them funny or interesting. I had to force myself to listen thnking that someone who aspired to the Presidency would have something worthwhile to say. He doesn't.

He would have had my vote!

Would you consider the audio edition of This Is Herman Cain! to be better than the print version?

I don't know as I did not see the print version. However, I did thoroughly enjoy hearing Herman tell his story in his own voice.

What was one of the most memorable moments of This Is Herman Cain!?

I loved the story about he and his Dad and brother driving somewhere and getting stopped for speeding.

Which character – as performed by Herman Cain – was your favorite?

His love for his family, especially his grandchildren.

Wonderful story, I highly recommend it.

The book covers the author's personal life, with lots of anecdotes about his warm family life and business career, but it provides very little information about what Mr. Cain intends to do to improve our economy and halt the war on the middle class. He does state his intention to enforce our immigration laws and deport illegal aliens, but even there he suggests that he might delegate that task to the states.

I was disappointed because I expected a clear, detailed statement of what Mr. Cain proposes to do if he is elected and the book does not provide that.

The book gives a good insight to "The Man" who is Herman Cain. Narrated by Herman Cain himself, he takes us back to his childhood and his upbringing and sharing with us a lot of the things (and people) that shaped and formed his opinions and viewpoints of what he is all about today.

Actually, I think he's a much better politician than he is an author, but hey, what the heck, you might as well get your story out there!

An average read for an above average guy!

This Is Herman Cain!

I was a faithful Herman Cain Show listener, supporter and now reader. I love Herman Cain. I
think he did a good job in writing this book and no one else could have narrated it better. I wish that most authors would narrate their own books but then, some are not the greatest. He did great. Herman is evidently high energy, I admire that. I admire his work ethic. I hope that he would get an office involving economics in government. It does not have to involve 9-9-9. He would bring some sound economic knowledge and experience to a much needed area. He would be a good asset.

Would you listen to This Is Herman Cain! again? Why?

This book served its purpose, which was to inform me a bit more about the current presidential candidate. The author reads the book himself and does a great job! He puts his own attitude and feeling into the audio book. I can't say that I would read it a second time, once was enough.

What other book might you compare This Is Herman Cain! to and why?

Other biographies are similar to this book

What does Herman Cain bring to the story that you wouldn’t experience if you just read the book?

I really enjoyed his laughter and attitude included with the audio reading. I feel that it added to the book as a whole.

No, it was not particularly compelling.

This is Herman Cain

Knowing the life story of a person who plans to become president of the United States is important. This book seemed to highlight Mr. Cain's life without significant details. For the most part, he captures the "essence" of the trials and times of his emergence to success without too much fanfare. Unlike Mr. Obama's book, Mr. Cain did not disclose information to the reader that would allow him to express a message of full disclosure. Based upon hine sight, he may have avoided the negative media blitz that has recently occurred.

The tenor of the book was positive and Mr. Cain's story could serve as a road map for young people, particularly young black men, to perservere. It may be difficult for some to reflect back to the times of Mr. Cain's success story. If one were to do so, I think that the tone of this book serves all people well.

I don't know how far Mr. Cain will go, but his biography was entertaining and genuine. Hearing Mr. Cain read it is all the better.

I've enjoyed and continue to enjoy this book immensely. I'm hoping that Audible will soon offer Cain's book "They Think You're Stupid".... Maybe there is no audio recording of it yet. Anyway, not only does "This is Herman Cain" give the reader a deep sense of the real Herman Cain (btw, precisely the same Herman Cain we see publicly), but it's also an easy, relaxing and entertaining read. I believe this is his fifth or sixth book. The more I read, the more I like. If you don't agree with his politics, that's fine, but I can't imagine anyone failing to find inspiration in his story of hard work, self-reliance, integrity, leadership, etc... Herman has a great sense of humor as well, and I'm so glad he did the narration of this book. It's wonderful to her him tell his own story.

I have the Herman Cain bumper-sticker on my car. I have supported his run for the presidency long before Rick Perry even made it into the race. However, I must say, the performance on this audio book was awful. I am perfectly fine with the fact that this was probably ghost written. I think we all know about speech writers. Also, I don't expect that a candidate for President has the time to write a novel version of his stump speech.
Herman Cain narrated this book as though he had never read it before, let alone written it. surely he could have taken a few moments before each chapter to skim the reading and plan out his inflection. It was really painful to listen too. That said, the subject matter was great. The background was impressive. I have nothing but respect for this honest and hard working business man. CAIN 2012!