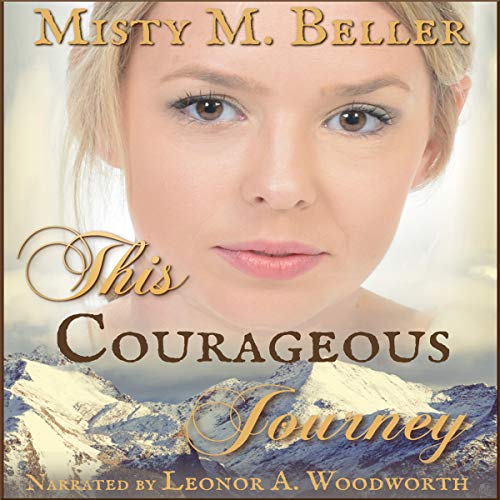 By: Misty M. Beller
Narrated by: Leonor A Woodworth
Try for £0.00

As the fifth daughter in a family of nine, Noelle Grant spent her life striving to be unique. Her love of telling stories helps define her goal - to be known around the country as one of the top news correspondents of her time. And what better way to uncover sensational tales than to travel through the mountain wilderness to visit her brother? The trip comes together perfectly as she journeys with family friends who will be settling in the same area. Her first inkling that things may not be as perfect as she’d imagined shows up in the form of the mountain man hired as their guide for the final leg of the journey.

When Daniel Abrams agrees to guide the small group of easterners along his usual route northward to the Canadian mountains, his gut tells him he’s making a terrible decision. But if he doesn’t take them, who will? The crew’s leader refuses to consider turning back. As they start out, Daniel can’t help but notice the woman traveling under the care of her friends. Though she appears too genteel to last long in these mountains, she soon reveals a strength that draws him more than he should allow.

When the dangers of this wilderness become more than the group bargained for, Noelle must choose to delay her trip northward or proceed alone with the man she’s come to trust against all reason. She never dreams her decision will place her - and the man she loves - in a situation more hazardous than any story her imagination could conjure.

What listeners say about This Courageous Journey

If you are in the mood for a wonderful listen, sure to clear your head and make you feel good, this one is for you! This inspirational series is beautifully written and is full of adventure and love. This installment lets us meet Noelle who is going to her brother Simeon's house. She is being guided through the Canadian Rockies by Daniel. These two have some slow burning chemistry, but given the times and the circumstances, they do not act on it, at least at first! The Rockies hold some danger as they go through, the weather being less than cooperative and unexpected situations that do occur. There are a couple of things I really love about this story. Tit's very graphic in the visuals of the Rockies. I love when you can picture a scene in your head, and Misty M Beller does this perfectly. She also creates very strong female characters. During this time period, I think a lot of women were strong, but to hear a character like Noelle, who weathers the storms, defeats sickness and helps Daniel in his time of need shows the real inner strength of her character. Daniel shows great emotional change during his trip, giving the story real depth too. It's a great journey.

Leonor A Woodworth has a beautiful voice, and I find her narrations melodic and soothing. She always picks great books to narrate, and her voices for the characters are always perfect. She is wonderful to listen to.

This historical fiction has it all, adventure, travel, friendship, and romance....... plus a dog and horses. The listener finds themselves hoping Noelle and Daniel will survive their rugged journey. It grabs hold of the listener and keeps them hanging on for dear life until the very end. An excellent listen!!!

The narration was well done. The characters were well portrayed. Leonor A. Woodworth draws you into this story!!!

She's determined to go on, can he keep her safe?

It's a little hard to believe that this is the fourth book in the Heart Of The Mountains series, I keep thinking I've listened to only a couple but then I realize that I'm actually half done with the series. Needless to say, I've been enjoying them quite a bit and each one more than the one before.

As with its predecessors This Courageous Journey has a small cast of characters, most of the story features just the hero and heroine. This is something that sets it apart from most historical romances and it's something I really like. It gave Noelle and Daniel the chance to interact, for the romance to develop, instead of just “Hi, nice to meet you, let's get married.” It also gives readers the time to really get to know and like Noelle and Daniel, which is how it went for me.

I've been listening to this series in audiobook form and this one was no exception. I've come to expect a quality production in sound and narration, which, is exactly what I have gotten. The narrator is has been the same so far and I appreciate both the continuity and her pleasant reading voice. She's so easy to listen to and has done full justice to Misty M. Beller's tales of wilderness adventure and romance.

All in all, a good story and a good audiobook. One that I would recommend to any lover of historical romance with a faith message.

(I received a copy of this book from the author/publisher. All opinions are entirely my own.)

I almost didn’t choose this book because of the cover. The plot is excellent. Without the excellent plotting the journey would have been unbelievable but Beller did a great job on this book.

Noelle a woman who has a strong faith and courage, especially going into the mountains. The guide Daniel the conditions of blizzard, uneven terrain, animals was definitely not for the faint hearted person. Her book she gave a good detail account of what they endured. Given audio which added to the story for my voluntary review and my honest opinion

This is a beautiful tale of God’s love and man’s love! The journey has only begun!

The narration was again, perfect for this story!!

The continuing series just gets better and better!

I will not rephrase what the plot is, but I do want to say that Misty Beller’s Heart of the Mountains series is getting better and better. This is a stand alone book, but is even richer when read as part of the series. If you like an unconventional “historical westerns” and like to read about how people survive and grow during sometimes difficult journeys through the Rocky Mountains, then you will like this series!

The plot of this book of an inspiring storyteller Noelle Grant and mountain man turned guide Daniel Abrams travel to Noelle’s brother’s homestead in Canada. Some of the events that Misty has our hero and heroine go through are original and I have never read in a story before! It was exciting and the characters were wonderful!

Leonor once again brings her great voice and story telling talent to this series. I am so glad that she is doing this entire series! Looking forward to the next book!

She's a journalist--or wants to be--and he's a part mestis who is acting as a guide to her party traveling to the Canadian territories through the northwest wilderness. Inflicted with many of the travails suffered by pioneers going west, the party eventually splits up; however, the illness that forced a delay has now put the remaining travelers in winter's path. Unless you are an avid outdoorsman you will learn a great deal about wilderness survival as well as some hint of the history and hardships of many of our ancestors. I had the pleasure of listening to Leonor Woodworth's narration, adding extra layers of enjoyment to the story.

A beautifully told tale of a journey to the Canadian mountains. So descriptive, I felt like I was right there in the harsh wilderness.

Leonor A Woodworth gave a beautiful performance. The perfect voice for each of the characters.

What a fantastic audio journey

Even though this is book 4 of the series , it’s my first from both the author and narrator. It didn’t disappoint me . It was great. This story will capture your heart and don’t let it go till the end .

Hero is Daniel. Heroine is Noelle.
Noelle has big dreams , she wants to work for a newspaper and be a journalist. She knows that those dreams will happen in Canada where her brother lives . She’s setting out with another family and their guide , thing is she doesn’t know about Daniel. She’s determined to go at it
Daniel is a wonderful character , his outlook in life . How he doesn’t give up is great . He is struck with lightning and doesn’t feel up to par . Nicole nurses him through. That is where they become fast friends. As the journey continues Noelle and Daniel become real close , they become a couple . Listen to this audio so you can journey with them through life .
Leonor the narrator was great , her voice is strong , clear and smooth . Her voice is very soothing also