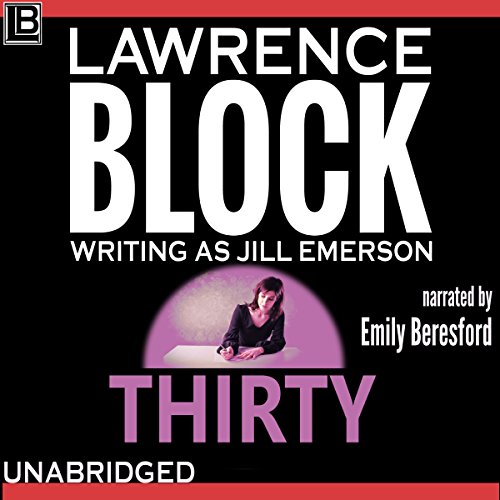 The edgy diary of a 1960s housewife's adventure of self-realization.

Turning 29 years old, Janet Giddings Kurland starts a journal and records her comfortably routine suburban lifestyle. But when she rolls the dice with her friend's husband, she starts down a path that will lead her to the hip streets of Greenwich Village. Amidst the sexually free, Janet blossoms and her housewife's journal turns into a sex diary filled with unexpected encounters, dangerous partners, and drug-fueled sexual escapades.

Will her adventures destroy her? Or will she find, as the poet William Blake proclaimed, that the road of excess leads to the palace of wisdom?

Lawrence Block, award-winning novelist and screenwriter, has written eight novels over the years as Jill Emerson. Thirty is one of them.

What listeners say about Thirty

Another Audible book consumed over the course of a week or so's driving to work and back. My commute is about 20 minutes, sometimes longer each day which allows the opportunity to get about 3-4 hours more "reading" in a week. Happy days.

Here we have a diary of a woman, plotting her journey from slightly dissatisfied housewife to a single sexually liberated free woman. I'm not too sure if she is any happier at the end of her journal than she was at the beginning, but she's had a fair few adventures along the way.

No crime or mystery to this one, which is what you can usually expect from Lawrence Block, but as he explains above it's a different book written for a different audience at a different time in his writing career. This is quite graphic with it's prose and the level of explicitness in its descriptions of our main character's sexual liaisons. It's quite a contrast to a couple of his other early books that I listened to previously - 21 Gay Street and Of Shame and Joy. Between the early 60s and 1970 you can definitely see a relaxation in censorship laws.

In short then..... a 29 year old woman, married and bored, a chance remark from a friend and a different outlook on life, a fumble at a party, a treat for the kid shovelling snow, a packing of the bags and a move to the city - New York, a series of encounters - single men, two men, one woman, a woman and a man, new experiences, a control freak, enjoying it, enduring it, a whole tick list of variations and possibilities from A-Z - probably a few more as well, giving it away, selling it, making new friends and acquaintances, falling pregnant, an abortion, an encounter with an old neighbourhood friend, an encounter with the estranged husband, pick-ups and trysts in bars, hotels, taxis, apartments etc etc.

I was fairly entertained by the shenanigans, without every feeling any great warmth or affection for our main character, Jan. Scrub that probably no affection for her. I did fear for her at one time, in her encounters with the controller Eric. He comes across as sadistic and inhuman, as opposed to some sort of liberator and mentor, freeing Jan from her shackles emotionally, from a personal level and those imposed by respectable society. Maybe around the mid-point he kinds of fades from the scene.

A week or two on from listening to this, I can't exactly remember where we left off with Jan, which is no great source of regret. I enjoyed the time spent in her company, Fifty years on, it would be interesting to have a catch up with her now and see what she's been up to in the last half a century. I'm betting she'll have calmed down a bit. I hope she's happier than at this stage of her life.

Without ever coming close to being the author's most enjoyable book ever, I did have fun with this one.

An enjoyable listen, with a pleasant narration from Emily Beresford.

Early Block is worth a listen

Where does Thirty rank among all the audiobooks you’ve listened to so far?

About mid-way, but I'm choosy what I listen to so don't get many duds.

If you’ve listened to books by Lawrence Block before, how does this one compare?

It's an early work as isn't as crafted as some later pieces but it's fun.

Which character – as performed by Emily Beresford – was your favourite?

The main character takes centre stage and dominates it - her.

Not that kind of book, to be honest.

I’m a big fan of LB and have read a large number of his books – well, there’s a lot to read and I’m still only about half way through his total output. He’s best known for his New York based crime fiction, with his Matt Scudder series being widely regarded as one of the best out there. But he’s a gifted writer and he’s produced work outside of this genre too, in the course of a long career. Recently, some of his very early pieces have been made available, after having been long out of print, and although most are not of the quality of his most recent novels they are in themselves interesting and entertaining. It’s possible to glimpse the promise of what’s to come and to admire, even in these stories, his ability to put words together in a style that few can match.
So when offered the chance to listen to this ambiguously titled story on audiobook (I’m a huge advocate of listening to others do the reading work for me) I didn’t hesitate. In the guise of one of his pseudonyms, this erotic romp is about as far from Scudder as you can get! It tracks the adventures of a 29 year old woman who liberates herself from an unsuccessful marriage to enjoy the full mix of pleasures available in latter day NYC. This turns out to be a downward spiral but there’s no doubting the fun she has along the way.
It’s a short but engaging tale and I feel all the better for spending a few hours in its company.

A good choice for an audiobook

What made the experience of listening to Thirty the most enjoyable?

The book was done as a journal, so hearing the entries in the protagonist's voice made it feel as if you were in her head.

What was one of the most memorable moments of Thirty?

When she decides to leave her husband, after bedding the delivery boy.

Her voice was perfect for the POV character.

I did not have an extreme reaction to the book. Block's work is always well-written, with characters that ring true.

Again, I think that doing this particular book as an audiobook was an excellent idea, because it gave me more of a sense of being in the protagonist's head.

Desperate Housewives Got Nothing On Her

With Janet, a twenty-nine year old wife, Block shows a desperation of a life not yet lived. Oh, she has the loving husband and the house and the comfortable life, but it absent of passion. And as she nears her thirtieth birthday, desperation sets it. This can't be all there is. Oh no, it is not.

It begins with a brief, almost spontaneous encounter with a young man that she invited into her bed, and after that Janet's life is irrevocably altered. She sees a way out of her dull existence, leaves her husband, drains their savings, and moves to New York. From there, her experiences become more fiery, and skirt towards even manic.

Emily Beresford offers a pitch-perfect narration through the book, as Block has it written as a series of diary entires. Emily quite capably captures the prim and proper bourgeoisie, continually tempered by her obsessions, self-doubt, and fear with each subsequent diary entry.

At a little over 5 hours, listening to this book in one sitting could be difficult. You would be able to do this in the course of one day.

Thirty is the story of Jan, a housewife who at the time of her 29th birthday decides that married life isn't for her and that she needs to find herself. She finds herself in the East Village of New York. This is the late 60's/early 70's and there is a sexual freedom in the air. Jan slowly finds out who she is and writes her story down in a diary.

I would recommend this to my friends 18+ as the sex scenes can get pretty detailed. Over all I did enjoy this book. It does make you think.

What did you love best about Thirty?

I liked the idea of an uptight woman slowly but surely losing her inhibitions.

What other book might you compare Thirty to and why?

Romancing the Fox or Twelve Doors to Ecstasy.

I think the scenes with the two men were memorable because she seemed to completely let go but felt safe.

When she became suicidal after realizing how her life was made up of nothing but debauchery.

Another enjoyable story from the incredible Lawrence Block.