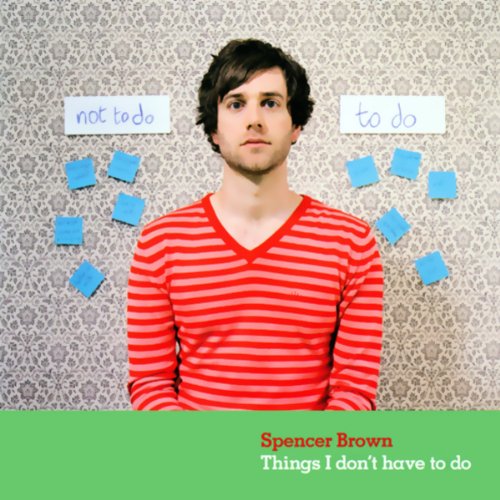 Things I Don't Have to Do

"Congratulations! You are now a member of a cult audience. This means that you know about me before a lot of other people do. Imagine the fun you'll have dropping my name into conversation with unsuspecting 'squares': 'Ha! That reminds me of that bit on the Spencer Brown album....'"'Who?' They'll reply, falling naively into your trap. You'll pause as if you have said something you shouldn't, nod knowingly, and then turn back to your copy of Proust.

"But being a member of a cult audience has its responsibilities: mention my name enough and you'll be one of the cool people; mention it too much and I'll be rich and famous and you'll be just another face in the crowd. A sheep. So enjoy it while you can. It won't be long before you'll be saying 'Spencer Brown? Yeah.... I like his early stuff, but I feel he's gone a bit mainstream....' Try saying it now. It feels good doesn't it? Almost something to look forward to...or who knows? Maybe that'll turn out to be just another thing you don't have to do!"
Spencer Brown

What listeners say about Things I Don't Have to Do