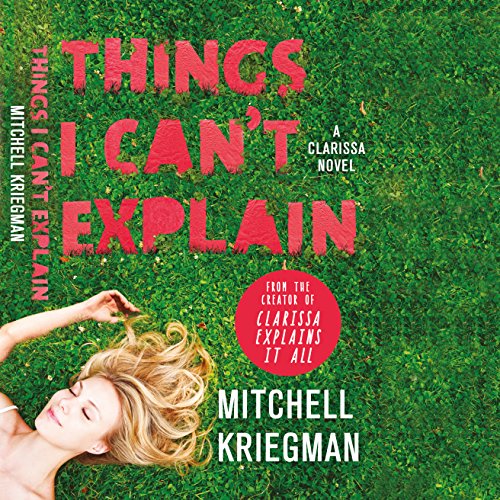 A complete reimagining of the 1990s television hit Clarissa Explains It All as 20-something Clarissa tries to navigate the unemployment line, mompreneurs, and the collision of two people in love.

She was a smart, snappy, lighthearted girl who knew it all at 14 and let television audiences everywhere know it. Now a woman in her late 20s, her searching blue eyes are more serious but mostly amused by the people around her. The gap-toothed smile that made her seem younger than she really was is gone, but she still lightens up the room. Her unpredictable wardrobe rocks just like when she was a kid, but her fashion sense has evolved, and it makes men and women turn their heads.

After leaving high school early, Clarissa interned at the Daily Post while attending night school. At the ripe old age of 22 she had it made - her own journalism beat (fashion, gender politics, and crime), an affordable apartment in FiDi, and a livable wage. She was so totally ahead of the game. Ah, those were the days! All three of them. Remember the stock market crash of '08? Remember when people actually bought newspapers?

All of Clarissa's charming obsessions, charts, graphs, and superstitions have survived into adulthood, but they've evolved into an ever-greater need to claw the world back under control. Her mid-20s crisis has left her with a whole set of things she can't explain: an ex-boyfriend turned stalker, her parents' divorce, a micro relationship with the cute coffee guy, java addiction, "To-Flue Glue", and then there's Sam. Where's Sam anyway?

Things I Can't Explain is about knowing it all in your teens and then feeling like you know nothing in your 20s. It is an entertaining and must-listen sequel for all fans of Mitchell Kriegman's Nickelodeon TV show Clarissa Explains It All.

What listeners say about Things I Can't Explain

I was excited to download this since it was a spiritual successor to one of my favorite shows growing up. The story was rushed at times (especially the end), the narration was not edited well (at one point she asked to start over so she could clear her throat), and it was just a let down all around. I didn't like the way the author made Clarissa out to be some wilting flower. I grew up with her being a strong girl. Not some sad woman hiding out in her apartment pining over a boy. If there's a sequel, I'm hoping they make her a little stronger.

May be, you childhood heroes shouldn't ever grow up:) It's hard to see them cursing and having sexlife.

The ending is too crumpled and abridged.

But in general - not bad at all! Feels like it was another few episodes of Clarissa's life and there will be more. .. (I hope so! :)

Thank you so much, Mr. Kriegman! It was really nice to meet this crazy girl again. Like a long time no seen childhood friend...

p.s. There was some off-screen speaking and few repeated takes which weren't deleted from the published version of this audio book. Have someone listened to it before starting to sell? )

A great take on a classic show.

Would you consider the audio edition of Things I Can't Explain to be better than the print version?

I would, due to the narration.

Clarissa herself, being the main character.

She's great with accents, among other things.

If you could rename Things I Can't Explain, what would you call it?

Afraid I can't think of an alternate title.

A must-have for fans of Clarissa Explains It All.

Needs another pass by an editor

I really enjoyed the story and the reader was quite good. Unfortunately, the editor needed to take a few more passes. There are repeated lines all over the place and one instance where the reader apologizes that she needed to swallow before she started the next line. Technical issues aside, I enjoyed this book. It doesn’t quite feel like Clarissa, but it was a believable direction for her to go with her life. There was a lot of ridiculouslness, especially with her parents and her brother. They were probably the least believable part of the story. The story follows Clarissa after she’s finished college and landed her dream job as a journalist... and then the newspaper promptly went out of business. So we see Clarissa coping with unemployment, bad relationships, parents with too many of their own problems to listen to hers, imposter syndrome, and coping with trying to make and maintain friendships in adulthood. There were several problems for me, but they didn’t ruin it. The romances mostly seemed pretty flat and the one sex scene pulled me completely out of the story because it read like it was written by a middle aged man, not a 20-something girl. The ending fell flat for me. It was fine, but felt like it wrapped up two things very neatly and everything else very poorly. I would have preferred either a more sitcom-styled ending with a Clarissa style flair or an ending which had more realistic wrap-up that actually gave emotional resolution to several side stories. If you liked Clarissa Explains It all, this book will be quite darling to you. If you haven’t seen the show or didn’t care for it, you can probably give it a miss.

The book was enjoyable, but the performance was dry and uninteresting, and apparently unedited. there were several repeated lines and the reader even talked to someone else at times during the recording. Totally unprofessional.

The narrator is great, but I'm only on chapter 5 and I've heard the narrator stop and re-read something three times. Lazy editing.

Don’t pay for this one

Poorly edited to the point where the actress will stop mid sentence speak to the producer and then redo the line. The story itself is weak, goes no where and the final act is beyond silly / cringe worthy and just badly done. Fans of Clarissa should just look up fan fiction because that has to be better than this official garbage.