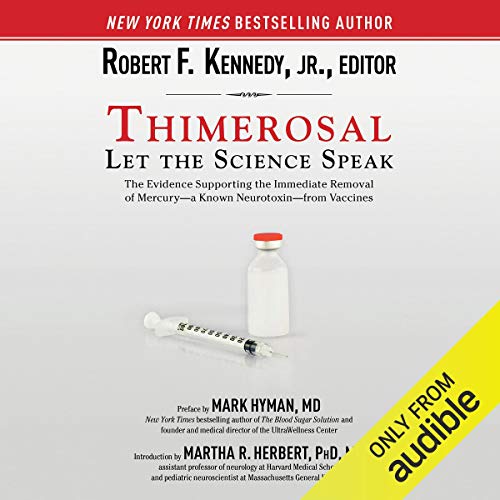 From New York Times best-selling author Robert F. Kennedy, Jr., comes a science-based call for the immediate removal of the dangerous mercury-containing preservative Thimerosal from vaccines. Over a decade ago, following a sharp rise in developmental disorders such as autism and ADHD, the mercury-containing preservative Thimerosal was widely believed to have been eliminated from vaccine supplies in the United States and abroad. However, dangerous quantities of Thimerosal continue to be used, posing a significant threat to public health and leading to a crisis of faith in vaccine safety.

In this groundbreaking audiobook, Robert F. Kennedy, Jr., examines the research literature on Thimerosal and makes a very clear statement about its potentially dangerous effects. In the past, the CDC, FDA, NIH, and AAP, as well as the US Congress, the American Academy of Family Physicians, the US Department of Agriculture, the European Medicines Agency, and the California Environmental Protection Agency have expressed concerns over the use of Thimerosal in vaccines. But despite the many voices calling for action, the media and policy makers have repeatedly failed to adequately address the issue. Now, with Thimerosal: Let the Science Speak, the science supporting the elimination of this toxic chemical from the world's vaccine supplies, and its replacement with already available safer alternatives, is all in one place. Making this change should increase vaccination rates by restoring the trust of concerned parents in the vaccine program - a program that is so vitally important to public health.

What listeners say about Thimerosal: Let the Science Speak

If you believe in the state and never question anything, jog on and keep believing in the fairies.If however you are sceptical and question most things, to draw your own informed conclusion, then this book if for you. Taking note might well stop your kids getting ADHD, cancer or one day senile dementure. Keep an open mind.

Types of mercury and difference between them physiologically is very helpful for clarifications of common confusion. If mercury leave blood is it a good thing? Not, if it settles in the brain and other tissues. Very informative book which can be useful regardless if you consider yourself pro-vaccines, anti-vaccines or, like me, pro informed consent and freedom of medical choice for yourself and your children.

I had to rewind a few times to make sure I was following, there is a lot of good info in the book on the data of thimerosal exposure and the corruption at the CDC, I didn't want to miss anything by passsive listening.

Challenging to listen to, but worth it

What made the experience of listening to Thimerosal: Let the Science Speak the most enjoyable?

This is not a book for pleasure. It was horrible to hear about the people in power who were and are doing things that cause immense suffering to babies and children and their families. These people, even after finding out the results of their actions, hid (and continue to hide) those results and continue to hurt people. It's frightening. I wish it weren't true, but Robert F. Kennedy lays it all out there and backs up everything he says with research and facts, as far as I can tell.

It's unbelievable that people have been injecting a substance into babies and children that is a known neurotoxin and, if the doctor doesn't use it up, the stuff is considered hazardous waste(!) and can't even be disposed of in the regular trash. OMG! Why would anyone allow hazardous waste to be injected into your newborn baby (or your child at any age) when there are safer vaccine alternatives?

The whole book was shocking.

Thank you Robert F. Kennedy for your work on this issue! I'm looking forward to the day when those who have perpetrated such evil will be held accountable. I hope that in the meantime people with babies are able to protect them from this harm by asking their doctor for vaccines without the thimerosal.

Time for a change,


This book was informative, it's a disgrace what Big Pharma gets away with. They need to be held accountable.

I loved that this book explained why and how thimerosal in vaccines is so detrimental to ourselves and our children. it's not a theory unfortunately and has been proven by science but still so many people choose to ignore how dangerous it can be I saw firsthand what it can do to a healthy HAPPY baby. autism is induced by toxins like thimerosal. this is a must read!!!

This is NOT an antivax book I learned a lot about the unnecessary mercury in vaccines. there are other alternatives, safer alternative preservatives/options for vaccines. A bit dry (to be expected) but an excellent worthwhile read.

my son's autism was highly "correlated" to Thimerasol in my Rh Neg shots, my contact solutions, and the protocols in 1998. He is healed, but it took so much, and hurt many.