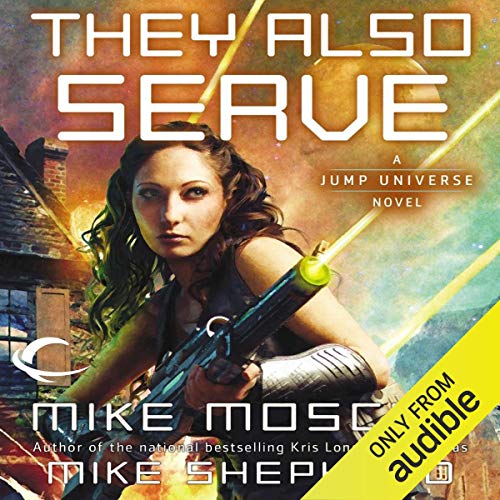 By: Mike Shepherd
Narrated by: Michael McConnahie
Try for £0.00

Colonel Ray Longknife and Marine Captain Mary Rodrigo were once enemies in an interstellar war. Now they're working together to keep the peace. But can they protect themselves from an enemy they can't even see? When a bad space jump flings their starship thousands of light-years away from home, Longknife and Rodrigo make an amazing discovery: a planet inhabited by the descendants of a ship's crew - lost three hundred years earlier.

As acting ambassador, Longknife is eager to welcome the planet's population back into the fold of humanity. But Rodrigo is suspicious. She senses that something is wrong under the planet's veneer of peace and prosperity. And she's right....

What listeners say about They Also Serve

another excellent book in the series

After listening to the Kris Longknife books, this one explains a lot of the backstory
Finally finding out about 'The Teacher' has helped with understanding a lot of the Longknife history and I am looking forward to the last in this series as much as I am looking forward to the next Kris Longknife novel
As with all Mike McConnahie books it is well read, with good accents and character seperation. I do not usually get on with American narrators, but his voice and the story pulls you in.

Good book a new type of story for this author

What made the experience of listening to They Also Serve the most enjoyable?

The history of it front he longknife universe.

This story is a little different for the author and not one i found that good. i like the book but the enemy in this story didn't do it for me. how ever there is enough of the story that i still enjoyed the book.

Would you consider the audio edition of They Also Serve to be better than the print version?

Unanswerable, as I only bought audio version. One thing that would probably make the audio version better than print version is the way Michael McConnahie's delivery made even the most mundane lines sound like the whole story hinges on whatever is happening. If McConnahie narrated the act of eating a bowl of cornflakes before work on some Tuesday morning, he could make it sound like the fate of nations is in the balance. Add some bananas to that cereal bowl and humanity's continued existence is now up for grabs. I am a better person after listening to him.

What other book might you compare They Also Serve to and why?

In the interests of full disclosure, I really do not feel I need to compare this book to other books. It stands alone, as much as a second book in a series can stand alone, and is a unique contribution to the science fiction genre.

What does Michael McConnahie bring to the story that you wouldn’t experience if you just read the book?

He has a somewhat sardonic, satirical kind of delivery that creates a kind of melodramatic vibe throughout the book. As I previously mentioned, he can pump suspense into just about any scene. This might make some lightweight, pissy listeners look askance and get turned off. To these pretentious whiners I say "Sucks for you - you already bought it and Audible is not going to bounce a friggin' dime back your way!"

McConnahie was the right choice for this book and the others in the series. I do not think I would have enjoyed these books if another narrator was behind the mic.

Will someone please find Victoria - probably the worst sister since the family-unit was invented - a firm no-nonsense love interest? The way that sexless train wreck went about trying to destroy the hopes and dreams of just about every single citizen and visitor to that miserable planet they lived on, all I could think about by around the 3/4's point in the story was "this chick needs a hobby or something to divert her one-tracked vindictive mind and give people who unfortunately find themselves in her general area a break." I started hoping that the author would throw in some "designated Victoria nailer" who starts out sweet and caring but ends up thoroughly and mercilessly pounding her into obedient submission - anyone, guy or gal, hyper - pneumatic cyborg breeding unit, or, hell.... if it will mellow her jumpy ass down, introduce a large rubber coated blunt tube-like cylindrical mechanism into the mix and watch her go!!!

I hope there are more books in this series. I also think McConnahie should be turned on to some more well-written satirical sci fi narrator gigs. I would definitely cough up some jack for the privilege.

Where does They Also Serve rank among all the audiobooks you’ve listened to so far?

I have enjoyed all three of the first three books that are of the history of Kris Longknife. Mr. Muscoe/Shephard has realize a true universe that is believable and expectant for this family of star travelers. This pretty much as I would expect Star Trek space exploration to begin. I have enjoyed all of the books and highly recommend the entire series. Mr. Muscoe/Shepard has created a brand new Ellen Ripley for us!