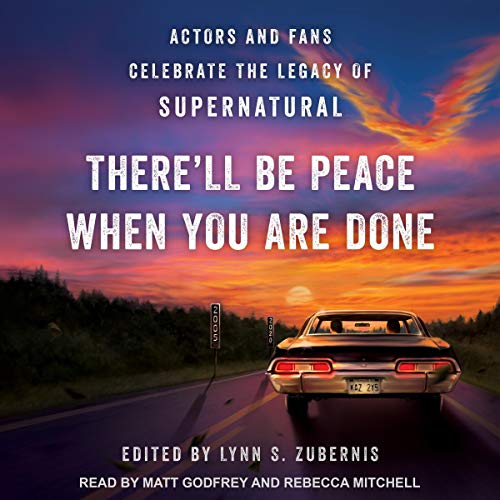 There'll Be Peace When You Are Done

Fifteen years. Two brothers. Angels and demons. A story like no other. And one of the most passionate fan bases of all time.

There'll Be Peace When You Are Done: Actors and Fans Celebrate the Legacy of Supernatural is an emotional look back at the beloved television show Supernatural as it wraps up its final season after 15 unprecedented years on air.

With heartfelt chapters written by both the series' actors and its fans, There'll Be Peace When You Are Done traces Supernatural's evolution, the memorable characters created by its writers and brought to life by its talented actors, and the many ways in which the show has inspired and changed the lives of both its viewers and cast.

Both a celebration of Supernatural and a way of remembering what made it so special, this book is a permanent reminder of the legacy the show leaves behind and a reminder to the SPN Family to, like the series' unofficial theme song says, "carry on."

What listeners say about There'll Be Peace When You Are Done

There Will Be Peace

I love Super Natural and this book sums up my feelings about the show. How all those AWESOME PEOPLE have touched my life. I wish and pray there will be other books devoted to how this SPN family changed their lives.

emotionally gutted in the best way

I have only ever written one review... but after listening, I felt compelled to share about this book. As a long time fan of Supernatural, I had never before thought to put into words what the show means to me. Then I found Family Don't End with Blood. I finished that book shortly after the series ended and immediately purchased There'll be Peace When You are Done. This collection of stories from fans and actors has been nothing short of a blessing in the midst of mourning a show I devotedly watched for over a decade. Hearing from Jared about what the spnfamily has meant to him started the book and I knew I was in for another emotional roller coaster. For those devoted Jensen fans that want to know- yes, he did write a chapter in here. Listening to the musings of the actors who had everything from short roles, to recurring guest spots and the stars who built lasting careers on this show has deepened my already eternal gratitude and love for everything this show and the family of fans stands for. I never had the opportunity to attend conventions like many others did, but after listening to these books- I feel, in some small way, that I finally got to be a part of the magic. Supernatural may be over, but I will happily rewatch, and now-relisten to these stories, for years to come. It is so true that family don't end with blood, and it has been wonderful to hear from so many members of this wide-reaching family.