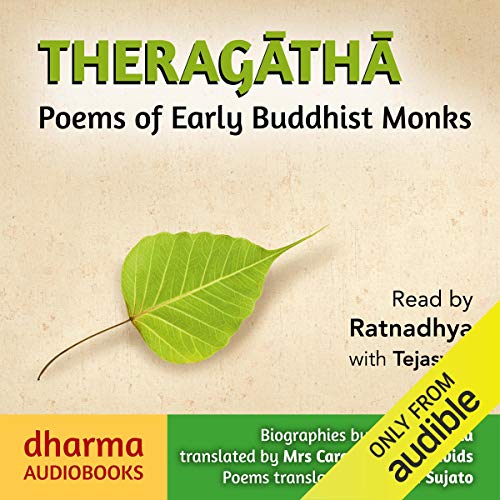 The Theragatha is one of the most striking texts in the Pali Canon. It is a collection of 264 poems or verses - some short, some long - by monks who, traditionally, lived at the time of the Buddha, and which expressed their experience of insight, the culmination of their spiritual path.

In fact, it is generally recognised now that this collection was added to over the years, so that some of the verses date from a later time. But this does not diminish this collection, as the verses reflect the intimate and very honest thoughts of those monks - sometimes clearly intent on the goal, sometimes struggling not to be diverted; also strongly evident, however, is the joy and sense of fulfilment of their practice.

What makes this collection all the more vivid is that in the fifth century CE, a monk, Dhammapala, drew together the biographies of these individual monks (from sources now lost), which bring these personalities to life in an extraordinary way. In this recording, the biographies precede the verses. Every verse, therefore, emerges from a human being whom we have come to know - albeit briefly.

Some came from wealthy backgrounds but were so persuaded by the Buddha's teaching that they left their world of comfort and ease and donned the yellow robes and took up the lifestyle of a wandering monk on the dusty roads of India; others were from very poor families. Sometimes, it was the direct intervention of the Buddha that prompted the change of life direction: the Buddha could see that a person, however unlikely from appearance, had a special quality for spiritual practice 'like a lamp shining in a jar' and urged him to follow the Dhamma. It is the combination of these biographies and the verses which makes the Theragatha so absorbing - and curiously relevant to today.

Dhammapala's biographies are presented here in the classic translation (revised for this recording) by Mrs Caroline Rhys Davids. However the poems have been newly translated by Ajahn Sujato and are fresh and direct. Both are read by Ratnadhya. At the end of the Theragatha, we present a fascinating essay by Mrs Rhys Davids in which she makes some astute observations about the historical, poetic and spiritual background to the works, giving us a greater understanding of this unique corner of the Pali Canon.

The Therigatha, Poems of the Early Buddhist Nuns, is also available from Dharma Audiobooks.

What listeners say about Theragatha