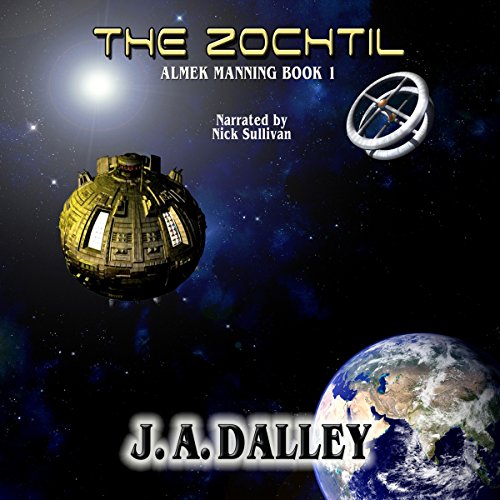 By: James Dalley
Narrated by: Nick Sullivan
Try for £0.00

Jump to the stars! Join the Solar Fleet!

The Solar Fleet faces just two problems: one, the alien blockade that prevents any ship from leaving the solar system, and two, the United Monarchy of Europe, which is tying up most of the Solar Fleet's resources, thus preventing them from attacking the blockade.

Almek Manning is 18 and wishes to join the Solar Fleet as a midshipman and train at the Academy. However, Almek has a few problems of his own to overcome before he can go to the Academy, the first of which is to escape from a United Monarchy of Europe detention facility.

What listeners say about The Zochtil

This is My Book

“Packed with action and plenty of sci-fi elements, J.A. Dalley creates a universe that draws you in and makes you feel as if you are right there with the characters.”

“I found ‘The Zochtil’ to be very entertaining. The characters are engaging and interesting. The story is a fast-paced, action-packed experience.”

“I never read books but I was able to get into this one and really enjoy it cant wait for the next book to come out.”

“From start to finish Dalley keeps you pulled into the story.”

What made the experience of listening to The Zochtil the most enjoyable?

The reader makes the story come to life much more than just reading the book. Have done both.

What does Nick Sullivan bring to the story that you wouldn’t experience if you just read the book?

Nick Sullivan has the great ability to make each character is the book well defined. It is as if he has become that character. He makes the story move along and makes the listener feel like he was there viewing the happenings

The book was too long to listen to it at one time. It was good that it was divided so that it has a logical stopping point and then could easily pick up the story line without any difficulty.

When is the next book in the series going to be available. The book is written very much like a script for a movie and has the dialog well defined.

If you could sum up The Zochtil in three words, what would they be?

Saphire. I mean, how can you go wrong with a cat alien that change to humanoid form?

Which character – as performed by Nick Sullivan – was your favorite?

It made me smile spontaneously at various points.

This book is what seems to be leeding up to a very good next book! It has a good plot so far, and good narration. Worth a listen. I will listen to the next book.

It is definitely something to my taste.
It was easy going and very interesting story. i didn't notice the time as it passed by.
During the story I had a vague sense of deja vu , but I couldn't understand why?
I think the book felt like a merger of New Star Trek movie and the first book of STEN series.
I will definitely get the second book as soon as it gets out!
Nnarration as always was superb.

What disappointed you about The Zochtil?

The way it was written. Had a lot of potential but was not done very well.

What could James Dalley have done to make this a more enjoyable book for you?

The story moved to slow and it sounded too much like a kids book.

Who would you have cast as narrator instead of Nick Sullivan?

Mark Boyett, he would have definitelty done a better job. And has a lot more range.

If you could play editor, what scene or scenes would you have cut from The Zochtil?

Most of the middle of this story.